The rising Saxon rage in one photo.

The alt news over the past couple of weeks has been dominated by the unjust and corrupt arrest of UK activist Tommy Robinson for the supposed crime of reporting on an ongoing trial of Asian rape gangs somewhere in what used to be known as Merry England.

On the weekend protesters in support of Robinson clashed with police outside Whitehall. It didn’t go too well for the cops.

Napoleon had this sort of problem very early on when he was in the process of consolidating power. He stuck some cannon and a regiment at the gate and literally blew away the crowd of angry peasants who had been whipped up by his enemies and competitors for the keys to France. Problem solved.

Those in charge today either do not have the balls to do this or they literally have no balls at all, (hello Theresa May, you useless bint.) The English working class is beginning to wake up to this. But the interesting thing about the video is that a casual appraisal of the last section as the crowd moves on in the wake of the fleeing coppers reveals a surprising number of very obvious members of the middle class who are also in the crowd.

The Saxon may just be beginning to rage.

But it was a photo of the drama that struck me as being an accurate portrayal of where the boundaries exist as regards the coming holocaust. 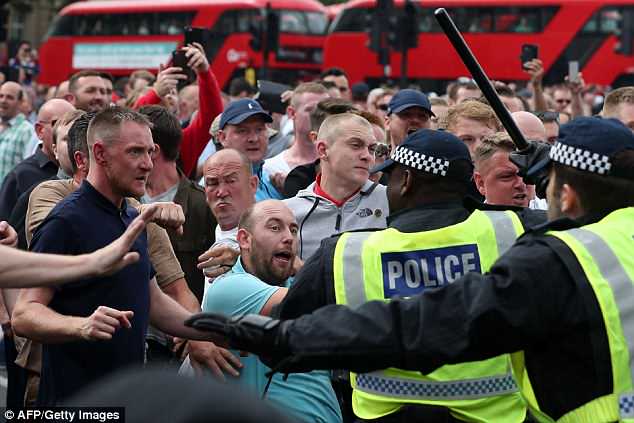 The elite have been continuing the class war of the past 200 years while the rest of us have slumbered and wallowed in unprecedented amounts of wealth, goods and food that have never before existed in human history. While most of us slept they have sought to extend the class war through racial replacement of the unwelcome population to one more pliant and accepting of the scraps thrown by their betters.

But based on this, things are looking up. Onward Christian soldiers.

Podcast #5 – The no chicks allowed! episode.