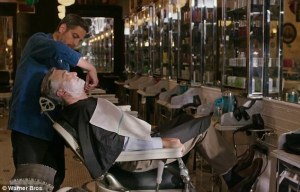 Continuing with our theme of discovering the 28 traits of the modern man, we have the 2nd trait: The modern man shaves every day.

There is a scene in the Robert Di Nero film, The Intern, where the always elegantly attired Di Nero character is asked by his scruffy twenty-something colleagues, (who look as if they’ve just dragged themselves out of bed on a Sunday morning), if he shaves every day.

Yes, he replies. Every day.

Even Sunday? They ask in disbelief.

The act of shaving every day signifies many things. It is an act of discipline, something sorely lacking in today’s world. By beginning the day with such an act, the modern man puts the rest of his day into sharp focus. He is starting off on the right foot which means he doesn’t have to play catch-up. By beginning with focus and discipline he sets the tone for the rest of his day.

The act of shaving is simply that – an act, and it encompasses every facet of personal grooming. Perhaps the modern man has a beard – then he will ensure that it is neatly trimmed. What sort of haircut does he have? A five dollar cut looks like a five dollar cut. Are his ears trimmed, his nose hairs plucked, his eyebrows groomed? What sort of aftershave does he use and has he applied it appropriately?

Personal grooming means you take pride in your appearance. Taking pride in your appearance signifies that you are empathetic – by taking care of your appearance you put others at ease. Only a shallow and self-absorbed individual demands that the world ‘accepts them for who they are’ no matter the hideousness of their appearance. In a similar vein, uttering the facile line, ‘don’t judge a book by its cover’, when referencing oneself signifies that the speaker lives in a world of delusion – they want the world to conform to them and their own sense of entitlement.

The modern man recognizes this for the nonsense that it is. He is a part of the civilization in which he lives. Demanding that civilization change to accommodate an individual’s selfish desires is the mark of complete immaturity.

Di Nero’s seventy year old character in the film gets the girl. It is in part due to his grooming. He stands out from his colleagues not just because he is older but because he takes care of himself. Women like to go to bed with men who are clean. His cohorts when measured against him wouldn’t stand a chance. They aren’t even in the same league. When I catch a train into the city during peak-hour it is educational to observe the young men around me. For the most part they look like something the cat dragged in. I have no doubt that these same men routinely complain around the office coffee machine that they can’t get the attention of the hot girl in the next office.

The modern man shaves every day.

3rd Trait – The modern man does not say sorry.