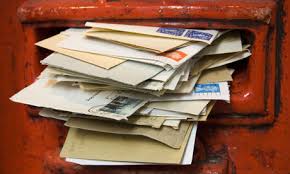 About six years ago my personal finances were not in good shape. I had entered a realm of almost total denial. Each day I came home and walked past my letterbox. I did not open it for I knew it contained bills and terrible bank statements. I did this for months. Walking past the letterbox which taunted me with its capacity for absorption. Unfortunately for me my letterbox was quite large.

Eventually I turned things around. And it started with opening that letterbox and then opening and dealing with everything inside it. I didn’t do it alone. My wife helped me. But she didn’t open the letterbox for me. She knew that I needed to come to that point on my own.

An article this week in The Atlantic reveals that almost 50% of Americans can’t afford to pay for a $400 emergency. It’s a long article where the writer goes deep into his personal financial situation as he is one of those who can’t afford a small emergency.

His financial situation can be summed up with three mistakes that he has consistently made over his lifetime.

The third one is interesting. The guy actually thought that paying the monthly minimum on his credit cards was financially acceptable, (hint – it’s not; you stand to pay an incredible amount of interest if you do this).

A lot of this goes back to the 9th trait of the modern man – spend less than you earn. But it’s also about dealing with your debt and not getting yourself back in that same position again. If nearly half of Americans can’t afford $400 then I’m imagining that some of you reading this now would need to put your hands up.

You can turn things around. I did. Here’s what it took:

I was living what seemed to be a dream life in the mountain Alps of Italy. In reality the income opportunities and prohibitive tax codes meant that every year I was getting deeper into a hole. So in 2010 I told my wife we needed to move to my native country, Australia, which at the time was booming. Moving back to a place that I didn’t want to be was a very hard thing to do. But the decision was easy as we had no other choice. My wife was relieved that I had finally been able to come to that decision.

We landed in Perth with barely enough money to purchase a shitty secondhand car. I took a job working as a field-hand on a mining exploration site in the middle of the desert. My wife and I took a spare room at a friend’s house. My wife had to wait six months for her work visa and then she set about finding a job. Bit by bit we saved what we could. Our goal was clear – spend less than we earn and do not go into debt.

Five years later, we can easily afford a $400 emergency. This is a direct result of hard choices and hard work. It was all worth it. Do I miss my life in the mountains of Italy? Hell yeah. Would I return to that time if I could with the same financial burdens? It would be a nightmare. Because a nightmare it was and I lived it. Too afraid to open a letterbox.

If you need to do this as well then today is the day to make that decision. Every day you leave it it only gets worse. The good thing about taking action is that it will begin to get better. It won’t seem that way at first, in fact often you have to dip down to begin to go up. But living in fear of your unopened letterbox is a life of misery.

According to Alec Baldwin I suffer from mental illness.