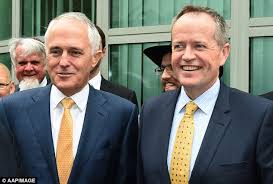 The above photo is of the two plonkers who are battling it out for victory in the Australian 2016 federal election. The one on the right is a true progressive lefty, (his latest gaff is to advocate a treaty with aborigines – hint: a treaty implies a surrender, so think about that one). The one on the left is a lefty-light. He’s a lefty wrapped in conservative clothing.

I actually think it would be better for Australia to elect the true progressive leftie because things would become so bad, so quickly, (think of Canada right at this moment), that no leftie government would be elected for a few generations as a result. Which is why they’re throwing the election. The lefties want the pretend conservatives to win so that all the leftie economic bombs that have been set over the past 10 years will go off on their watch. This will enable the lefties to win the next election in 2020 with a clear mandate to dismantle the evil capitalist society that will be responsible for all the awfulness, apparently.

But I’m getting beyond myself. This post actually is about jobs. Both of these numb-nuts are rushing around the country and in every unfortunate town where they touch down they are both promising masses of jobs. Thousands of jobs. We’ll give you jobs! The people throw up their hands in supplication. Jobs! They’ll give us jobs! Hooray!

Fuck me dead. Listen up and listen good. Governments have never, in the history of the world, created a single job ever. What they do create are vampire jobs. This is a wonderful term that I have just invented. Before I can define what a vampire job is we first need to examine what actual jobs are.

Actual jobs are created by entrepreneurs. These people set up entities called businesses. In a free market economy these businesses create wealth by producing a product and then finding a customer. The customer has the choice to consume the product or not which leads to innovation on the part of the businesses. By this process wealth is created. Governments then tax these businesses and people. The higher the tax the less individuals have to consume business products and the less money the businesses have to innovate, invest in themselves, and most importantly, hire more people.

Governments now have money. With this money they can create vampire jobs. For example, let’s say the government decides that it is vitally important for it to interfere in the childcare market. It sets up an overseeing childcare body and staffs it with 10,000 public servants. The money to pay these people is the tax that has been appropriated by force from actual businesses. So these 10,000 jobs exist at the expense of these businesses. The businesses are the host and these jobs are the parasite sucking on the businesses’ necks. Vampire jobs.

But wait, there’s more. While businesses can grow and create more jobs, government jobs can never do so. Once the tax money dries up then the government jobs are gone. Business jobs exist for so long as they have a customer for their product. There are many examples of historical family businesses that have been in existence for hundreds of years, outliving all governments and in some cases different political formats.

Even government entities such as telecommunications companies are vampire jobs because either they exist in a monopoly, (which is never good for the customer), or they undermine existing or future businesses who have to compete with government funded entities and their unlimited checkbook. A great example of this is the government media network in Australia, the ABC. The ABC has a huge internet presence providing all sorts of services that has resulted in private businesses attempting to provide the same services going broke and shutting up shop. They cannot compete with the government behemoth, (the ABC’s annual budget is $1.1 billion), and the potential tax earnings from these failed businesses are lost as a result.

And yet these two clowns continue to promise jobs and people continue to believe them. Australia’s population is around 24 million people and there are over 2.2 million public sector jobs. Just how long do you think it’s possible for all those parasitic vampire jobs to continue to exist at the expense of private enterprise? Unfortunately we’re not all that far from finding out.