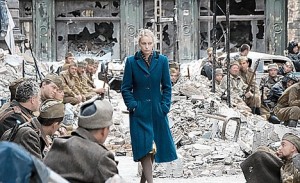 a scene from the film, ‘A Woman in Berlin’.

The ongoing campus rape hysteria in the USA is the subject of an excellent article over at Stacey McCain’s blog. Of particular interest is the video of Laci Green who is a self styled “public sex educator, and feminist activist”. Public sex educator is SJW-speak for “deviant interfering busybody”. Green has called for all accusations of rape, even if they are published on platforms such as Reddit or Youtube, to be treated with the utmost seriousness. “I believe you,” she says, which is hilarious as Youtube has now been flooded with individual claims that Laci Green raped them. And according to her own statement, those accusations must be believed.

The claim that 1 in 5 college women have been raped already on college campuses is one of those outrageously false claims that travels the world in the blink of an eye and becomes a convenient truth for those inclined to manipulate it to their own ends. One of the more famous recent examples of this is the erroneous claim that 97% of climate scientists agree with anthropogenic climate change. But in order to examine the idea that so many women could be raped on college campuses, one must only examine a real historical situation of mass rape and the effect that it had on the women involved in order to debunk such blatant and wicked nonsense.

The excellent “Berlin” by WWII historian Anthony Beevor examines in detail what occurred to that city as the Soviet Army descended on it in April 1945. Beevor describes the numbers and the effect:

Berliners remember that, because all the windows had been blown in, you could hear the screams every night. Estimates from the two main Berlin hospitals ranged from 95,000 to 130,000 rape victims. One doctor deduced that out of approximately 100,000 women raped in Berlin, some 10,000 died as a result, mostly from suicide. The death rate was thought to be much higher among the 1.4 million who had suffered in East Prussia, Pomerania, and Silesia. Altogether at least 2 million German women are thought to have been raped, and a substantial minority, if not a majority, appear to have suffered multiple rape. A friend of Ursula von Kardorff and the Soviet spy Schulze-Boysen was raped by ‘twenty three soldiers one after the other’. She had to be stitched up in hospital afterwards.

Based on that information and on bare numbers, we should be looking at a suicide rate of at least 10% of American women on college campuses. If such a thing were happening, what might the mothers of these young women be doing? One only has to return to Berlin in those terrible months to discover the reality:

Young daughters were hidden in storage lofts for days on end. Mothers emerged into the street to fetch water only in the early morning when Soviet soldiers were sleeping off the alcohol from the night before. Sometimes the gravest danger came from one mother giving away the hiding place of other girls in a desperate bid to save her own daughters.

That is a rape culture. Activist women like Laci Green claiming that there is a rape culture on campuses are quite simply a total disgrace when one considers this historical reality. There are roughly 7 million female college students in America today. With the numbers that they claim this would be around 1.4 million women who have been raped, of which we would expect a low-ball figure of 140,000 to have killed themselves.

By attempting to redefine rape to fit a broad standard which would include inappropriately touching a woman’s arm, they pour scorn on these real victims, some of whom would still be alive today. A woman who has been raped does not post about it on Youtube of all places. Instead there is a decent chance that she simply sticks a gun in her mouth.

The value of self restraint.