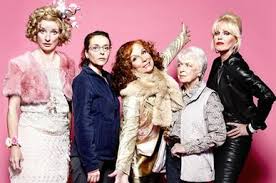 Tanya Gold writes for The Spectator UK magazine where she presides over possibly the best restaurant reviews on the planet. Her reviews are simply indescribable – if I were a restaurant owner I would view her impending material with a mix of abject terror and irresistible pleasure. But writing on the topic of the British television series, Absolutely Fabulous, Gold gets it very wrong indeed:

Eddy, you see, is the functional one in Absolutely Fabulous; the enabler. The other one is Patsy (Joanna Lumley), a woman whose physical beauty initially disguises (and I imagine makes palatable for an audience, unless the producers thought it hilarious to feature a drunk who also looks like Joanna Lumley) what I can only think is the cruellest and most accurate portrait of alcoholism I have seen in popular culture. Patsy gets drunk. No — that is wrong. Patsy is always drunk. Patsy falls over. Patsy wets herself. Patsy sets herself on fire.

All this is done without nuance, without wit and without shame. Patsy Stone does not belong in comedy. Mock the people who mock her, maybe. That could be comedy. This is something else. This is the stocks.

Jennifer Saunders has said that Ab Fab is really a comedy about friendship, which I imagine sits ill with Lynne Franks, who was once, apparently, her friend. The truth, I suspect, is sadder and, again, as old as Plautus: the BBC comedy department wanted a story about women who loathe themselves, and Saunders obliged.

Perhaps Gold would like to believe this, as the series is certainly uncomfortable when examined in only brief detail, but she is completely off the mark nonetheless. Ab Fab, as it is known, began production in 1992 and continued on and off for two decades of sporadic material. Far from being a series about women who loathe themselves, Ab Fab is in reality an examination of what happens to a small and financially successful family when no counter-balancing male personalities are present. Without any men to keep their emotions in check the women fall prey to their own self-indulgent and increasingly hysterical natures.

Apart from a daughter, (Saffron), Eddy also has a son, but we only see him once in the entire series, (and he turns out to be gay). He is mentioned on occasion in hopeful whispers, but the truth is that he saw which way the wind was blowing and he got out early. Saffron hates him for this and whenever his name is mentioned her face screws up in a prune-like visage of toxicity. Her own father, the only man who is continually present, (and then only sparingly), is himself gay, and thus unable to provide an effective buffer to her poisonous and vile mother.

Patsy’s alcoholism is not the source of her misery but merely a reaction to it. Patsy is the living embodiment of a once beautiful woman who has run head-long into the metaphoric wall. In fact I can think of no other character in popular media who represents this fundamental fear of women quite so well as Patsy. While still able to get into exclusive events and bed young men, as the series progresses she becomes an abject failure even at this, and we witness her increasingly desperate attempts to cling to a time when her sexual market value enabled her to have some measure of power.

These are women who have made bad choices and who are paying for it as a result. Eddy and Patsy have swallowed the lie that women can have it all and their journey is one of hysterical bewilderment that life is not working out for them as intended. Saffron is trapped into looking after her mother and gives up scarce opportunities to escape with different suitors, until eventually she falls pregnant on a trip to Uganda and has a child out of wedlock. The baby is a daughter, and thus the pattern continues as Saffron’s Ugandan lover has no intention of living up to any responsibilities, although he does concede to make her one of his many wives.

The series is about failure but it is the failure of the traditional nuclear family that is on show here. The series was so far ahead of its time that this has gone unnoticed but with the release of the new movie it is startling to reexamine Saunders’ work under contemporary norms. In fact, I doubt that the series would be able to be broadcast today if pitched for the first time precisely because it skewers the progressive reality in which we now reside. It is too uncomfortable, but because it was made over twenty years ago it gets a pass.

Tanya Gold thinks that the series invited us to laugh at female failure. On the contrary, we are watching male failure, and it is uncomfortable viewing when seen through that prism. Any woman with a trace of logical thought who has spent time living with other women will be under no illusions as to what happens in a house ruled by emotion. Ab Fab sticks five women of varying ages and personality types together under the one roof and turns up the heat in a horrifyingly accurate manner. The result is a stultifying orgy of shallowness that is hilarious only because it accurately represents how easily women are lost without men to balance their emotional extremes. It is a series for our times and seen in this light it is prophetic.

The value of self restraint.

I no longer read books by women.