Hillary! because she’s a chick so why not? 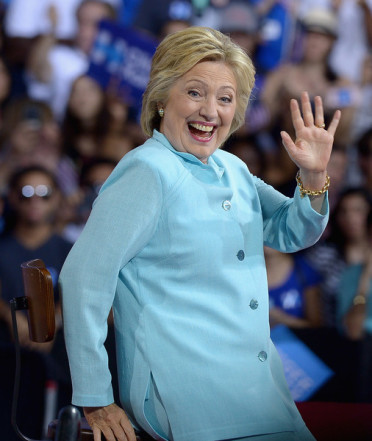 “okay, remember what they said … you smile by opening your mouth …”

So Hillary! has the nomination which is absolutely brilliant according to MSM bastions like the New York Times who reckon she’s just tops:

Her education and work ethic eventually opened many avenues to her, and — despite forays into lucrative and sometimes regrettable pursuits like her corporate speechmaking — she has always returned to a path of service. 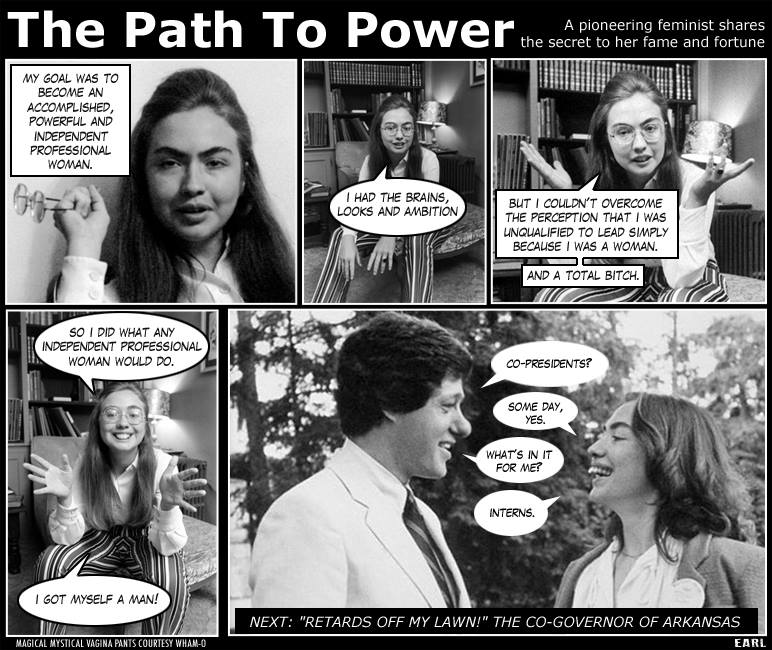 Is that really Bill Clinton’s nose? Yikes. Mind you I reckon it would have protected him from her teeth.

Anyway, back to the NY Times:

The first time Mrs. Clinton ran for president, in 2008, she all but ignored the historic nature of her candidacy; this time she has embraced it.

In other words, the first time she ran she tried to do it on her achievements and qualifications for the job but she has none of those so she went down like AIDS in a gay bar. So this time she’ll have to run on that old Julia Gillard fallback which is if you don’t vote for her then, misogyny! 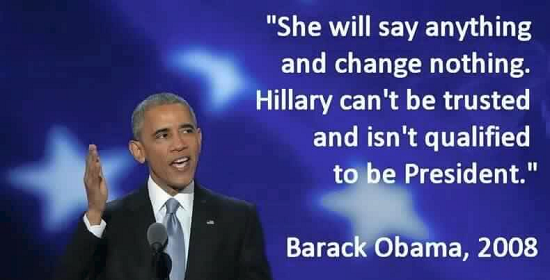 See what I mean? The fact is that Hillary! lost in 2008 to an opponent who had no qualifications or accomplishments either. She couldn’t even beat a fellow numpty. Back to the NY Times:

Is she the nominee because she has more relevant experience than just about any candidate for the presidency, or because she is the wife of a former president? Skeptical voters have scrutinized her age, voice, tone, even clothing as qualifiers for the White House. Small wonder women make up less than one-fifth of Congress, and only six are governors.

Well, it’s because she’s the wife of a former presi … misogyny! Look over there!

Actually, what is it with her clothes? Scroll back to the top of the page and have a look at that picture of her again, (warning – contains image of Hillary Clinton). I keep wondering if she’s trying out for the part of Chairman Mao’s 7th concubine. She couldn’t dress more like a Marxist if she tried.

Hillary reminds me of a character in Trevanian’s masterly assassin novel, Shibumi. The world depicted in the story is controlled by a sinister entity called the Mother Company. This is headed by a woman who likes her underlings to call her Ma. The description of her is as follows:

Mrs Perkins was a chubby woman in her mid-fifties. Clear maternal eyes, neck concealed beneath layers of chin, grey hair done up in a bun, with wisps that had escaped the net chignon, pigeon-breasted, plump forearms with deeply dimpled elbows, wearing a silk dress of purple paisley.

The book was published around the time that Hillary! was hooking her lifeline to her serial sexual predator. It is entirely possible that she read the novel and drew inspiration from it. Stranger things have happened. Last word to the NY Times:

Mrs. Clinton’s rise has not been smooth or particularly graceful. Some of her positions seem born more of political expediency than conviction. She can be secretive and defensive. Her failure to hold an open news conference for months shows a reluctance to submit to legitimate questions. Her candidacy itself is an act of courage; greater transparency would demonstrate that she does not intend to govern from a position of fear. Her challenge now is to persuade voters to judge her on her merits and ideas, rather than her gender or her husband’s record.

The editorial board seems slightly schizophrenic in its announcements. But you have to give them some credit in being able to suspend all disbelief in the face of available evidence.

As I’ve said repeatedly, Trump to carry every state.

There is no such thing as a moderate feminist.

Kevin Rudd and the graveyard of journalism.