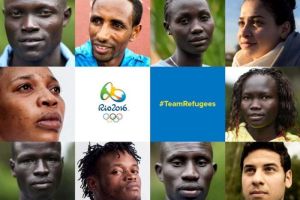 It had to happen. The first Olympics with a refugee team, representing not anyone at all, really. Funny, I didn’t see any refugee teams after WWII when a bunch of white people were displaced and homeless. But now we are more advanced than those barbarous times. We have the compassions! Be compassionate you must, hmmm. Well excuse me if my compassionate rating is below zero.

But this all makes sense in the scheme of things. For the Olympics are the ultimate sporting test of a national identity, and as I have mentioned before, the new political battle lines have shifted from left versus right. It’s now Globalism versus Nationalism. So even though the Olympics are undoubtedly stuffed with political activists and scheming SJW hordes, the very nature of the games supports nationalism. “Our nation is better than yours because we won more of the shiny medals.”

But a team with no nationality is the first step to changing all of that. It is the first global team. A team of the world. A team of the new world order, with one world government and one world religion. This team is headed up by one Tegla Loroupe, a Kenyan runner who went into the Kakuma refugee camp in Kenya and nosed around until she could find 23 individuals who wouldn’t completely embarrass themselves on the world stage.

This team wasn’t formed by refugee athletes beating down the doors demanding a chance to compete. It was constructed by the IOC to play a specific political role. In other words, these refugee athletes are merely pawns to be held up to a slavering world who can all get the feel-goods that they’re not racist at all, oh no sir me. The refugees don’t mind of course. Their part of the deal was getting out of the hellhole that Kakuma refugee camp undoubtedly is. Whether they go back there once it’s all over is another question.

The Olympics has always been about politics but this is the first time as far as I’m aware that the politics is about no country at all. Half of this refugee team hail from South Sudan. So do South Sudan have a team at the games? Why, yes they do. That’s a bit awkward, isn’t it. I don’t suppose they’ll all be taking the same bus to and from the village.

My thoughts turn to what will be the next step at the 2020 Olympic games. Perhaps a team comprised of “Citizens of the World.” There are plenty of people out there who view themselves as internationals. Perhaps their flag will be a white and black hand shaking alla 1984.

Can women vote for a doer?