I can’t believe women’s volleyball is an Olympic sport. 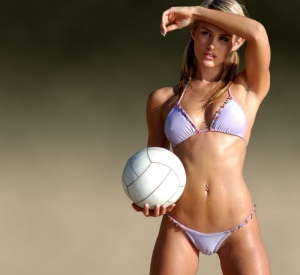 surely this shouldn’t be allowed under the new progressive paradigm …

The other day I went to a preseason cricket training session. When I arrived a bunch of my fellow club members were talking excitedly about the Olympics. One of them turned to me.

“Did you see the women’s soccer match with the Maltildas?”

I laughed in his face. “Why would I watch women’s soccer? Those no-hopers got beaten 7 to nothing by a schoolboy under 15 side.”

He persisted. “But one of them made this awesome kick …”

He stopped mid-sentence. “Go on,” I said. “Finish your sentence. You were going to say that one of them made an awesome kick for a girl.”

“You don’t understand,” he muttered.

The Olympics are of course a prime showcase for all the latest progressive luvvie fads. And what could be bigger than what is acknowledged everywhere by everyone with zealous enthusiasm than the simply fantastic spectacle that is women’s sport. The commentators fall over themselves to gush about how incredible it is, and how talented the girls are, and how important it is for them to be role models for young girls who also dream of participating in one of the great delusions of our time.

Because women’s sport is boring. It is dull. It is trite. It isn’t even second-rate. Second-rate would be pretty good, like Seria B. But it’s way below that level. When the Australian Olympic team gets thrashed that badly by a schoolboy side you know that there’s something wrong.

Unless you have to buy in to all of this rubbish for your very survival. To the true believers women’s sport is absolutely incredible because it has to be. They need it to be, so it is. They will it into existence. Because it carries their message of equality and even when that message is rudely disabused by harsh reality they will simply fall back onto to stock lines such as these:

Gary van Egmond is assistant Matildas coach and academy director of the Newcastle Jets. “To be honest we didn’t expect that,” he told The Huffington Post Australia.

“But the Jets boys were very good. All credit to them. They moved the ball around very well and were excellent on the night.”

Oh, that’s all right then. If you can be excellent on the night then you can beat a professionally coached team of professional Olympic players.

Van Egmond explained that the Matildas are often forced to play boys’ teams because there is not enough quality female opposition in our part of the world.

It’s not that there isn’t enough quality female teams. There aren’t any.

Van Egmond also had strong words for those who would question the strength of women’s football on the basis of this result.

“It all relative,” he said. “It’s no different from [the sort of result you’d expect] from a female tennis player or a female swimmer against a 15- or 16-year-old boy who’s maturing and starting to develop physically.”

“They have to be looked upon as two separate entities.”

Wow, strong words indeed. And they definitely are two separate entities. One exists in the real world and one is in fantasy cuckoo land. Female tennis players routinely complain that they don’t get paid as much as the men. Of course they don’t. Their games are usually over in 40 minutes. Who’s going to pay a grand to watch the women’s final when it’s all over by the time you get back from queuing up for the bathroom?

Which is why women’s volleyball is such an aberration. Its continued inclusion in the Olympics is remarkable simply for how much it goes against the progressive narrative. Nobody watches the volleyball for the sport. They watch it for the hawt chicks. And everyone knows it.

As we trained in the cricket nets a formal soccer match was being played in the field next to us. The young lads playing the game looked to be around the age of fifteen.

“See that lot?” I said. “They’d stand a very good chance of beating our women’s Olympic team. So how can you tell me that that is the pinnacle of sport?”

True believers to the end.

Update: China’s Fu Yuanhui breaks taboo by admitting she was on her period.

Just all part of the narrative.

The absurd idea of a “leadership team”.