Encourage a progressive to breed! 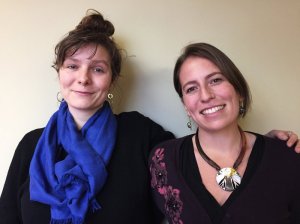 these two reckon they have a reproductive crisis. No argument there.

I actually wanted to title this post something along the lines of, “Progressives decide to surrender to fate by non-breeding themselves out of existence”, but it took up a bit too much room. Like our future children would! Geddit? Geddit? Ba-dom-chick!

In case you’re wondering what I’m babbling about, those crazy cats over at NPR have a piece titled, Should we be having kids in the age of climate change? My initial reaction is that they should not and thus this idea is a very good thing but more careful analysis casts doubt on this assumption.

Standing before several dozen students in a college classroom, Travis Rieder tries to convince them not to have children. Or at least not too many.

He’s at James Madison University in southwest Virginia to talk about a “small-family ethic” — to question the assumptions of a society that sees having children as good, throws parties for expecting parents, and in which parents then pressure their kids to “give them grandchildren.”

Why question such assumptions? The prospect of climate catastrophe.

For years, people have lamented how bad things might get “for our grandchildren,” but Rieder tells the students that future isn’t so far off anymore.

He asks how old they will be in 2036, and, if they are thinking of having kids, how old their kids will be.

“Dangerous climate change is going to be happening by then,” he says. “Very, very soon.”

As far as I’m concerned, anyone who is stupid enough to believe in the religion of climate change would be doing the world a favor by not breeding and thus avoiding the propagation of their stupidity. Because this dangerous climate change is going to happen really really soon, like very soon, like any day now. I’m serious. Just look out the window, look over there … Boom! It happened.

We used to make fun of doomsayers standing on the street holding their signs depicting that the end of the world was nigh. Now we give them grants and pay them to stand up and lecture people about their irresponsible breeding habits. And this from people who already had the good fortune to be like, you know, born.

Rieder wears a tweedy jacket and tennis shoes, and he limps because of a motorcycle accident. He’s a philosopher with the Berman Institute of Bioethics at Johns Hopkins University in Baltimore, and his arguments against having children are moral.

Americans and other rich nations produce the most carbon emissions per capita, he says. Yet people in the world’s poorest nations are most likely to suffer severe climate impacts, “and that seems unfair,” he says.

There’s also a moral duty to future generations that will live amid the climate devastation being created now.

Hang on a minute. If his arguments are moral then what’s all the crap about climate change? If this climate change was going to cause there to be less food in the future, (hint: it won’t because more CO2 means more food for plants), then the practical argument would be to have less children so as to avoid mass starvation. But now he’s saying that it’s a moral argument.

But his moral argument doesn’t even make sense. If people in poorer nations are most likely to suffer then it makes sense that they reduce their birthrates in the face of this huge coming catastrophe. But moral philosophers can’t go around saying brown babies bad, white babies good or they’d lose their tenure.

Back in the classroom, Rieder puts this in less technical terms: 4 degrees of warming would be “largely uninhabitable for humans.”

The room is quiet. No one fidgets. Later, a few students say they had no idea the situation was so bad. One says he appreciated the talk but found it terrifying, and hadn’t planned on being so shaken before heading off to start the weekend.

The poor little dears will just believe anything you tell them, won’t they? Can you imagine the trauma of being shaken before heading off for the weekend? Maybe they really do have a point that these people shouldn’t breed. As for the 4 degrees making earth uninhabitable, would that be because of all the dinosaurs that would be lumbering around in the subtropical environment in Greenland?

Meghan Hoskins is among a dozen people gathered in the spare office of an environmental group in Keene, N.H., earlier this year. They sit on folding chairs in a circle, the room humming with multiple conversations.

“If I had told my boyfriend at the time, ‘I’m not ready to have children because I don’t know what the climate’s gonna be like in 50 years,’ he wouldn’t have understood. There’s no way,” says Hoskins, a 23-year-old whose red hair is twisted in a long braid.

I reckon the boyfriend would have understood that it was time to get far away from the crazy chick, (I mean, a redhead – what was he thinking?)

Meghan Kallman is a co-founder of Conceivable Future. “I can’t count the number of times people have said, ‘Oh, my God, it’s so nice to know I’m not the only person that worries about this,’ ” she says.

Nothing makes crazies feel better than surrounding themselves with other fruitbats.

But Kallman and Ferorelli say the focus on numbers fails to capture the emotion that drives many to work on the issue in the first place. For activists of childbearing age, Ferorelli says, climate change isn’t just an intellectual problem but “a heart problem.”

I’m going to say it’s more about a “brain problem.”

Oh look, I could go on in this vein for the entire piece, which is fun, but ultimately unsatisfying. The real issue here is whether it would indeed be better for these numbskulls not to inflict their future progeny upon us. It seems to be a worthwhile idea, but there is a definite problem with it.

Children usually rebel against their parents. In other words, a child brought up with all the progressive fads would be more likely to tell them to go and stick it where the sun doesn’t shine when he becomes an adult. This is one of the reasons that I don’t want to have any kids. They’d probably turn into fucking lefties.

So the more I think about it the more I start to wonder if these moral philosophers are actually being really crafty here. By limiting the breeding of their own tribe they will be creating less enemies in the future. Suddenly this all looks very ominous indeed. It is a direct assault on the enemies of progressiveness – us.

I see no other alternative. We need to limit our breeding while encouraging luvvies everywhere to have as many children as possible. It is the only way forward.

The earth is doomed.

The stitch-up of the Australian Federal Police.