The importance of having a budget. 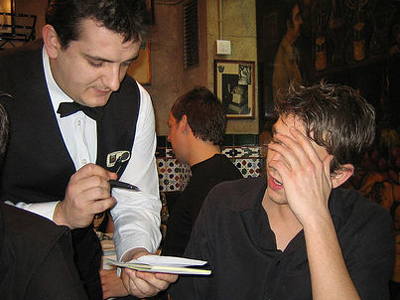 Your bill, sir, is three times your weekly salary.

Time for a personal finance post as it’s been a while between drinks. Today I’m going to look at the art of spending money. It might surprise you that spending money is in fact an art, but if motorcycle maintenance is an art then spending the cash that purchased it most certainly is as well. You can either spend money well or spend money badly. Let’s have a look at how this all works.

First of all, it’s important to keep in mind that there is no hard and fast-black and white rule on this. That is because people are very different, and money and its misuse tend to run on emotional lines. The key concept with regards to spending money is a budget.

You will not need to use a budget if your average monthly expenditure is less than your monthly income.

The key word in that sentence is ‘average’. And this is what I meant about there not being hard and fast rules. That sentence would be true for someone who not only has an average monthly spend lower than their income, but who is also the type of person that does not utilize the purchase of material items as an emotional release, nor do they make impulsive purchases based on feeling good, particularly large ones.

So you could well have an average monthly spend lower than your income but if you are the type of person who sees an advertisement for a BMW with a hawt chick running her finger down the sleek lines of the car, and you believe on an emotional level that you will get that hawt chick if you buy the car, and then you go and buy the car, then you need a budget.

Let’s have a look at this with an actual example. Two couples, one with an after tax income of $16,000 per month and another couple with an after tax income of $4000 per month. Both couples enjoy eating out in good restaurants. For both couples it is their way of unwinding at the end of the week. It’s important to keep in mind with this example that there is nothing wrong with eating out on a regular basis in nice restaurants. Other people spend vast amounts of money on things like golf or yachts or all sorts of hobbies. What you do with your money is your business. What we’re looking at here is if you can afford to do so.

Both couples go out to restaurants every week and their average weekly spend is $200 which comes to $800 per month, or $10,000 per year. The first couples yearly figures look like this:

So even though they spend 10 grand a year on eating out they still have 120K in savings at the end of the year. Let’s look at the second couple:

The second couple are just scraping by. If you think that this is some sort of exaggerated example, please keep in mind my post where I detailed how 50% of Americans can’t afford a $400 emergency. The study that I quoted looked at middle class Americans, not people on welfare.

Obviously the first couple can easily afford this so we can forget about them. It’s the second couple we need to focus on. If they could reduce their spending on eating out by 50% then they would have an extra $5000 in savings at the end of every year. It seems so obvious but so many people can’t do this simple task.

Sitting down and writing out a budget is one thing. Sticking with it is another. Back in the day when my finances were poor it was not unusual for me to go out with some friends, one thing led to another, we were all having a good time, and the next day I had spent $400 and my monthly budget had gone out the window. In other words, budgeting is one thing; control is another matter entirely.

The thing to do here is a cash withdrawal at the beginning of every month. So our couple now get $100 a week to spend on going out. At the beginning of the month, withdraw $400 from your bank account and keep it at home or on your person. That is your monthly going out budget. If it gets to zero then you can’t go out for the rest of the month. Cash also has a surprising effect on your spending. It’s much harder to spend cash than it is to swipe a card and punch in a pin-code. Cash is more real. You know you’re spending cash and you might find that you begin getting to the end of the month with some of the $400 left over. If that happens roll that money over to the next month as a saving. In other words, you arrive at the end of the month with $100 unspent. Withdraw $300 from the bank for the next month. This encourages you to save more.

The beauty of saving is once you get beyond a certain point you will find yourself unable to go below it. For me that number was $5000. Once I got beyond that number, my savings became very important to me. Things began to snowball from there and I found it easier and easier to save and not to spend. Your number may be more or less than $5000. But that’s because money is an emotional thing for so many of us. Having a budget and sticking to it is the key to keeping your emotions in check.

What happens when society “puts the pussy on a pedestal.”