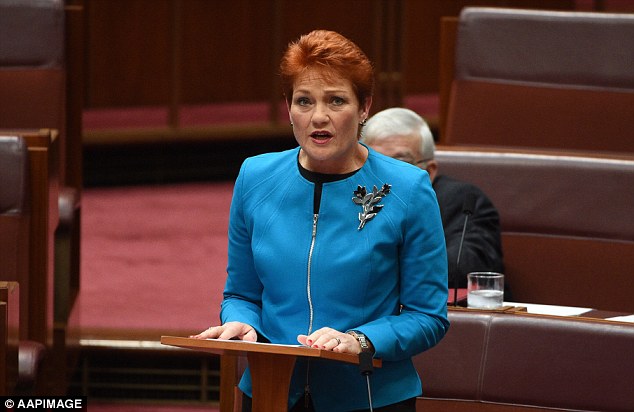 convenient lies – she’s not the one telling them.

A few days ago the results of a “shock poll” were revealed here in Australia. It turns out that 50% of those polled want an immediate ban on muslim immigration to this country. The poll was conducted as a result of federal politician and One Nation party leader Pauline Hanson calling for a ban on muslim immigration last week in her opening speech to the new parliament. No doubt the pollsters thought they would be showing that nasty racist Pauline that she was dead wrong. Instead the poll justified her call in the biggest way possible. The pollsters were so shocked they ran the poll again which got exactly the same result.

The response from mainstream political leaders here was so predictable as to be nauseating. The leader of the opposition Bill Shorten said that Australia was an immigrant country and that we all came from somewhere else. This is the usual convenient lie that our leaders here have been using for too long now. The problem for them is that the mainstream dirt people no longer believe it. Australia until quite recently was not an immigrant country. For the first 170 years of the country’s life we steadfastly refused to allow any immigration of people who were not of ‘good character’. So whitey got in and all the others got shown a closed door. Even after World War II we only allowed Europeans to come here. It was only with the disaster of the Vietnam war and the civil war in Lebanon in the late 70s that the first non-whites were allowed to immigrate. The floodgates were let open so to speak.

Shorten went on to say:

“I don’t want to do is see this country scapegoating minorities for the challenges of the bigger issues.” It was the argument of “crazy fundamentalist” Islamic extremists to say Muslims couldn’t support western Liberal democracy.

The prime minister also trotted out a couple of howlers. He repeated that Australia is the world’s most successful multicultural society. I suppose he is correct but it’s nothing to be proud of. It’s like living in a third world slum but saying that your street won the cleanest slum street award. I mean, you can be proud of that if you’re living in a fantasy world.

But the so-called success of multiculturalism is another of the convenient lies that are beginning to wear thin. Multiculturalism is a betrayal of the host culture. The idea that all cultures are equal is beyond all credibility. No other culture in the world matches the success and history of Western Civilization. The rise of large scale immigration from incompatible cultures together with the advent of multiculturalism that encourages immigrants not to integrate, (because after all – their culture is as good as ours, right?), has been a disaster.

Greens immigration spokesman Nick McKim said he had no doubt the majority of Australians were welcoming and open-hearted.

But the poll’s results were what happened when major parties capitulated to One Nation.

Talk about putting the cart before the horse. In McKim’s bubble-world, One Nation makes an announcement and suddenly half of Australia, including an incredible 34% of Greens voters, all fall into line? What power One Nation wields! The truth is that One Nation merely stated what millions of Australians are already thinking.

Meanwhile over in Europe, old Angela Merkel’s party are seeing their worst election results since 1990. The headline calls her ‘chastened’ and a quick read might leave the impression that she has realized that she made a mistake importing over a million cultural-enrichers to Germany. But then again …

The 62-year-old chancellor also said that she would like to turn back the clock “many years” so that Germany and Europe were better prepared to handle the pressure of migrants fleeing war zones and poverty.

In other words she’d do it all over again. Her only mistake was not being prepared enough which presumably means that she wished she had spent more time brainwashing and guilt tripping ordinary Germans into believing her lies.

“If I could I would turn back time many, many years to better prepare myself, the federal government and all those in positions of responsibility for the situation we were rather unprepared for in the late summer of 2015,” Mrs Merkel said.

If Australians were under any doubt as to the ability of our leaders to remain in cloud cuckoo land in the face of all available evidence then this is it. There will never be a ban on muslim immigration while the major parties are in power. It will take a minor party such as One Nation to grasp this opportunity to return Australia to a stable Liberal democracy. Such an entity is built on the people within it, not the land itself, and certainly not the convenient lies that we have all been swallowing for far too long.