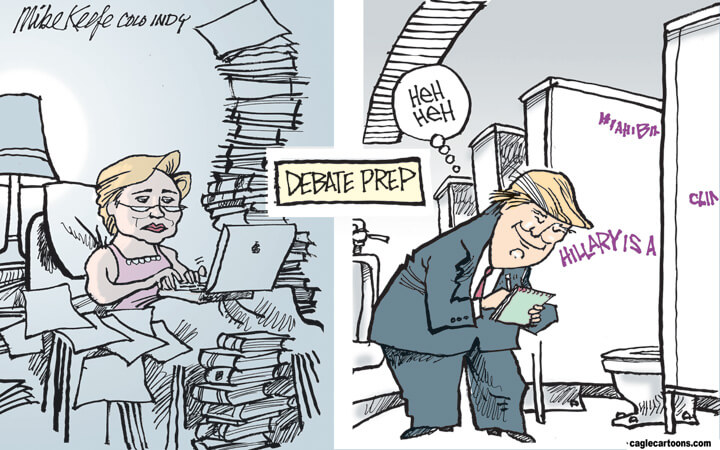 the only thing unbelievable here is Clinton writing her own material.

It’s a couple of hours until Trump faces off with Clinton in the first of the 90 minute televised debates. To put my feelings plainly, I have no doubt that Trump will wipe the floor with his opponent. This is a man who was the prime role on a massive syndicated reality show for years. He knows what to do with the camera, and he knows what to do with his opponent who must be in a state of foggy brain-melting panic as I write this. Clinton feels that she is owed the presidency, apparently for all the hard work she has done for America. So how could it come to this? The very idea that she must now step out onto the stage, face the Trump-monster, and actually have to earn her reward must be bewildering for her. It wasn’t supposed to be this way, after all she let the darkie win last time. Which is why Trump has to lose.

Don’t get me wrong. He won’t lose in the traditional sense. For those watching the debate the result will be clear enough. Trump will demolish the vastly over-prepared Clinton nightmare with off-the-cuff remarks, sly rhetoric, and piercing facts. It is going to be brutal. But this is a televised debate on mainstream media. The same media that has so discredited its once moderately fine reputation that it is even casting around for a different moniker to describe itself. The MSM controls the platform for the debate, it controls the moderators, and it controls the rules. Which is why the dissemination of the reporting of this debate will inevitably be that Trump lost.

I have no doubt that the articles have already been written. There will just be some gaps where they can insert some choice quotes, strategically aligned so as to maximize the outrage against Trump. Undoubtedly there will be a few versions ready to go; the final one selected will be the one that most resembles the nature of the debate.

So if Hillary has an epileptic fit and collapses in a heap like the wicked witch of the west, then the article will outline how Trump bullied her into a medical condition. Or perhaps Trump will continually interrupt her babbling incoherence and then they can run the piece about his awful misogyny and lack of respect for his opponent as a strong woman. More likely there will be a prepared article that shines with Clinton’s great oratorical brilliance. The editors will spend the 90 minutes of the debate slavering over every word that Clinton utters in her raspy voice. Even a hint of making a point, no matter how intrinsically worthless, (and perhaps the more worthless the better when you think about it), and this will be headlined within minutes as her great rebuttal and put-down of the evil Trump.

“Hillary the master orator!” will scream the headlines. “Trump vanquished at last!” “The Donald Demolished!” and so on.

Trump doesn’t care. He knows that it is going to go this way. Which is why, as he has continually done since the beginning of this extraordinary period of American politics, he will bypass the media. Trump will focus on the people watching. He doesn’t care how the MSM “reports” the debate as long as he gives his best shot to get the people to vote for him at the ballot box. This is what it’s about. The Clinton team are focusing on beating Trump and getting their prearranged headlines. Trump knows he will beat Clinton and he knows the headlines will reflect his opponent’s propaganda.

Which is why he will focus on the people watching at home. If I was focusing on the people watching, the most important thing for me would be to make sure that they stay on the channel. For this reason I don’t think Trump will start slow. Expect some early thunderbolts. And then some middle thunderbolts. And then some thunderbolts to finish it off with. At the end the smoking bodies of Clinton and the moderators will lie in ruins.

And Trump will have lost. But we already know that.