For the past year I have been on record that Trump will win the election. I have even stated various times that Trump will carry every state. I still believe that but I also have to agree with Aaron Clarey who has stated that Trump is doomed to fail.

Clarey believes that Trump won’t win the election precisely because Obama was reelected, an event that should never have occurred when going by his economic performance. Here I have to disagree as I think that Trump will win because of voter turnout. Democrats are so cheesed off by the sheer awfulness of Clinton that they won’t turn out to vote, whereas Trump is galvanizing people to vote for him who would have normally stayed at home.

However, on what will happen after Trump is elected I have to pessimistically agree with Clarey:

This is the real reason any discussion about “President Trump,” let alone the “saving of America” is moot and a waste of time.

Just about the only way open for Trump to prevent the collapse of the USA will be to go full draconian. The system is too rotten and those counting on its continuation too corrupt for any other option to have a reasonable effect. In other words, it has to get ugly real fast. The USA needs a dose of severe medicine to fix its problems. But I think that the medicine is going to come either way. It will just differ depending on who wins the election.

A recent unsubstantiated quote from Hillary Clinton is somewhat revealing: 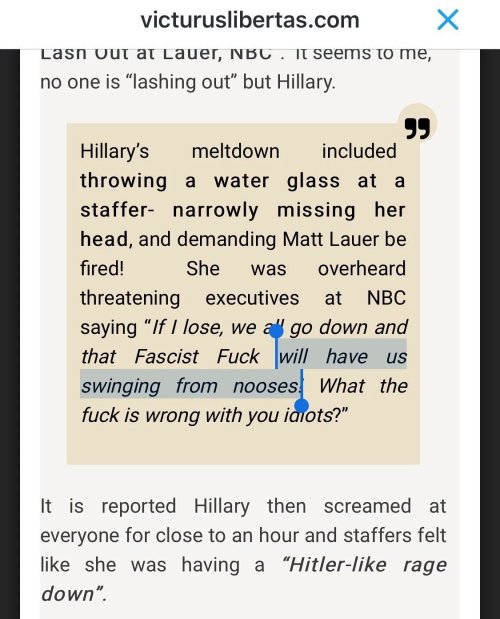 My interpretation of this is that this reveals what her intended actions will be in the event of her winning the presidency. She is worried that Trump will do precisely what she has planned for her enemies. Her enemies, of course, are the deplorables, and her allies are entities such as NBC.

Now, one month before the election we are seeing prominent alt-right commentators being purged from their platforms. Ricky Vaughn has been banned from Twitter as has Scott Adams and others. Matt Forney has been shadowbanned and so have many others.

The progressive left are playing for keeps on this one. They thought that they had it in the bag but this year has seen the Brexit result, the reemergence of Pauline Hanson in Australia as a political force, and the totally unexpected event of Trump gaining the Republican ticket. We need to only look at history for what the left will do next and the 20th century is chock full of delightful examples.

Even if he does win the election Trump will not be able to hold the USA together as it has traditionally existed for the past 150 years. The USA together with much of the Western World has spent the past forty years making poor long term strategic decisions. It will pay one way or another and it is going to be messy. One side’s leaders will most likely be swinging from nooses. The stakes are very high.

There is no saving the university system.