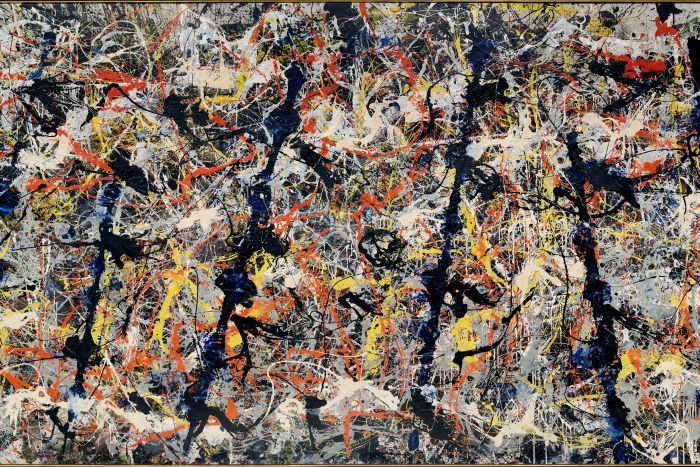 This week in the cold and not warming climes at all Down Under comes the news that one of our federal politicians reckons the government should sell Jackson Pollock’s Blue Polls painting seeing as it’s now worth a cool $350 million. The ‘artwork’ was purchased by the government in 1973 for $1.3 million which at the time was highly controversial. Predictably the luvvies have been aghast at this heresy and have been “appalled” that the suggestion has even been made.

On the face of it I reckon we need to get rid of it quick smart as the price is soon likely to go down faster than a nymphomaniac on speed.

Postmodernist art, to those of us with a functioning brain and eyes, is awful horrible dreck. But somehow its wildly inflated price points have persisted over several decades, something which has always caused me to scratch my head seeing as I’ve long predicted an art-world collapse similar to the Dutch ‘tulip mania’ that has inconveniently failed to eventuate.

But today some light has been shone on how this bubble has not only persisted but took off in the first place. It seems that it was all a dastardly CIA plot against those nasty Soviets.

CIA spooks floated pioneering artists like Jackson Pollock, Willem de Kooning, and Robert Motherwell, to drop an aesthetic nuke on Communism. What seemed like natural popularity of certain artists was, in part, actually a deliberate attempt at psychological warfare, backed by the US government.

This is what is known as letting the cat out of the bag. Now, the article does go on to say that this is okay because the Sistine Chapel was designed for the Pope so you know, hey, it’s pretty much the same thing. The problem is that a certain dude called Michelangelo already had a bit of a reputation when he got that Vatican ceiling job, unlike say, Jackson Pollock. And that Vatican ceiling job is what’s known as a fricking masterpiece whereas Blue Polls looks like … well what does it look like to you? A big pile of colored shit?

Frankly, with this unwanted information from the CIA if I was the owner of one of these “masterpieces” I’d be looking to unload it right about now. Which is why on the face of it the good senator’s call to dump it looks like a square deal, (and remember, he said this before we got the CIA news).

However, and there is a big however, I also don’t like this idea much at all. Why not? Well, dear reader, it would mean giving the government 350 million big ones to do with as they please. And I would rather give that cash to a heroin addict with a bunch of needy mates than see it go to the type of government that pours money down the drain like this:

Once one of the country’s largest private colleges, the Australian Institute of Professional Education has collapsed just days after the federal government moved to scrap the scandal-ridden vocational loan scheme.

Insolvency experts Ferrier Hodgson were yesterday appointed as external administrators of AIPE, which enrolled more than 16,000 students under the VET FEE-HELP student loan scheme, according to documents lodged with the Australian Securities & Investments Commission.

Education Minister Simon Birmingham earlier this week scrapped the loan scheme, replacing it with a system with strict loan limits and which only allows courses that align with industry needs to be eligible.

Existing providers will need to prove their bona fides, and barriers for new providers to enter the system will be far higher, Senator Birmingham said.

The collapse of AIPE, which was headed by businessman Amjad Khanche, could leave thousands of students without no way of recouping those debts — court documents show just 1.3 per cent, or 208, completed training.

Despite the low completion rate, the college collected $243 million in funding through the loan scheme over three years.

What’s this you say? The VET FEE-HELP student loan scheme was quite frankly a license for frauds and charlatans to steal taxpayer’s money. Just absorb the information in that news snippet. This education college, with 16,000 students, which was providing training certificates that you barely need a functioning brain to be able to obtain, only managed to get 208 students to complete their training while receiving $243 million from the government over three years.

In other words, the cost to taxpayer’s of each of these vocational training certificates was $1,169,000. I don’t know how much your fancy college degrees from Yale and Harvard cost but I have a slight suspicion that this is not good value for money.

So this guy, Amjad Khanche, sets up a business to defraud those silly Australians which promptly folds three days after the government funding is withdrawn. Just how shonky is this guy?

It attempted to have a decision taken by ASQA to cancel its registration rescinded, but documents lodged as part of the appeal alleged some brokers working for the company tried to entice enrolments by offering alcohol and marijuana as encouragement to sign up students.

But remember, this is only a single example. Do you think he was the only crook to have this brainwave and set up a fraudulent education college with the explicit intent to steal money from the taxpayer? Of course not, there must be dozens of others out there. But hey, the government is on to it, right? I mean, it only took them three years to work out that there was something fishy going on. What else have we got?

How about today’s news of this culture enricher who has done quite well for himself it seems:

The Australian revealedthis week the case of Ruben Majok Aleer Aguer, who received $1.6 mil­lion in taxpayer money to run a network of family childcare educators looking after up to 74 children. In a farcical game of cat and mouse that lasted 16 months, Mr Aguer led the monitoring authority, the ACT government, on a bizarre chase of excuses, ­delayed inspections and 13 site visits, during which no child was ever confirmed to be in his care.

All up when they’ve totaled the numbers of phony childcare services, we’re looking at a sum in the region of $1 billion.

In Victoria alone, these servic­es grew by 303 per cent, the vast majority being for-profit providers who “squeezed out” non-profit operators. In 2011, about one-quarter of services were delivered from ethnic communities. By 2014, this had become about 40 per cent. The biggest subsets in this group were those who spoke Arabic and Dinka, the major language group of South Sudan.

A senior figure with knowledge of the FDC policy believes word about potential “workarounds” in the system spread fastest in these communities.

I had dealings with South Sudanese when I lived in Africa. Crooks, every single one of them. I have no doubt that news of this easy way to fleece Australian taxpayers, the same taxpayers who gave them refuge from living in one of the biggest shitholes on earth, went through these communities faster than dysentery through an open sewer drain in Khartoum.

I’ll keep it saying it until I’m blue in the face – governments should never get involved in subsidizing any type of service or business. It artificially drives up prices in the good operators and leads to massive fraud in the naughty ones.

So back to that little painting which is now worth a cool 350 million smackaroos. Should we sell it or should we not should sell it? The price is liable to go down dramatically but on the other hand we would be giving that money to the government.

How to publish a book on Amazon.