A recent High court decision in Australia revealed an extraordinary attempt by former politicians to increase their retirement benefits at the taxpayers’ expense. While already on extremely generous retirement benefits, they argued that they should be paid the same as current sitting MPs as well as seeking a reintroduction of the infamous ‘Gold Pass’ which allowed them to take unlimited domestic flights once again paid for by taxpayers.

Their case was unsuccessful and they were ordered to pay costs. Personally I find a great deal of schadenfreude in all of this. I mean, if the former politicians had done their job and handled the economy in a better way, (which they could have achieved by just doing nothing at all), then maybe this inflation wouldn’t have hit their retirement packages. Boo hoo. But it’s not just former politicians who have their noses firmly imbedded in the trough. Today we have the news that Liberal member Steve Irons has been rorting the flight system, so he can fly him and his wife to their wedding and the horse races, amongst other places.

A common saying goes that a country gets the politicians it deserves, and there is no doubt that the type of people who are attracted to become politicians in the first place are exactly the type of people who you do not want running the country, into the ground as it were. Good people, the sort of people with those pesky virtues of temperance, charity, and diligence along with stuff called ethics and morals, those people tend to stay far away from political life. Our political system does not reward people who make sacrifices, rather it rewards those who sacrifice others for their own gain.

Generations of these types of people have created a disconnect between politicians and voters. People do not go into politics today to serve and better their country. It is a career, and as in any business it has become a closed shop. Once politicians came from working class backgrounds – former prime minister Ben Chifley was a railway engine driver. But now a political career is very clear set. Go to university and study law or political studies; while you’re there join the university “young politicians” group of your political choice; cause trouble and backstab all of your potential competitors; become a staffer or an “advisor” to a current politician; spend ten years sucking up and doing the dirty work, and bam you’re in a safe seat. Want to see the current advisors to Victorian state minister Lily D’Ambrosio? 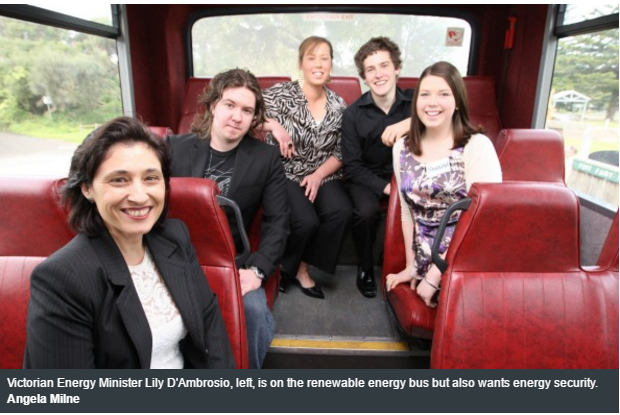 Looking at them just fills you with confidence, doesn’t it? Surely we can sleep secure at night knowing that critical energy infrastructure decisions are being made by those with the relevant maturity and experience? (Yes, they really are her advisors, I shit you not).

Every three years or so the politicians are forced to stand on street corners, hand out flyers, and actually talk to, yee gods, people. But once that awful business is done and they’re back in the Big Job they can go back to what they do best.

Looking after their own interests.

But the times they are a changing, as a certain Nobel prize winning songwriter once wrote. Pauline Hanson, the leader of the One Nation party, and the only person to be imprisoned in Australia’s history for political purposes, won a senate seat in the last election, some twenty years after her first ascent to federal parliament. She wasn’t alone. Three other first time senators joined her in Canberra, the four of them making up the One Nation party. That was July 2nd of this year. Now sixteen weeks later comes a “surprise poll” showing that One Nation’s support has risen from 1.3% on election day to 6% now, a fourfold increase across the nation.

“Expert” political commentators will of course attribute this rise to the awfulness of the Australian voter. The reality is far different. For the first time in many generations Australians are seeing good people make the effort to slog through the political process and seek to serve their country. Malcom Roberts is one of those four One Nation senators who were elected. Roberts began his working life as a coal miner, before qualifying as a mining engineer and moving on to general manager of various mining operations. His maiden speech to parliament caused outrage in established political and media circles when he poured scorn on the cult of climate change and the waste its proponents have engendered.

His speech, and the three other speeches from the One Nation senators, resonated with Australians everywhere. Finally we are hearing politicians speak using facts and logic and not rhetoric and management speak absurdities. The One Nation senators have called for a ban on Muslim immigration, they have called for Islamic terrorism to be clearly defined and not hidden behind a wall of politically correct lies, and they have demanded that Australia withdraw its membership of the United Nations.

One Nation has potentially three more years to build up its supporter base and go big at the next federal election. And big it will indeed go if it continues to find more good men.

The gun, the bicycle, and beer.

You import Africans you’ll get Africa.