I’ve been sick for the past week. Apparently when you kill a bunch of nasty parasites that you got from rafting in Uganda they don’t just magically disappear. They sit inside you and rot. Until your body goes, “Hang on a minute. I say, old boy, this isn’t so good, eh what? Looks like we’ll have to sort these buggers out and give them what for. Time to collapse our immune system so they can be expelled. Tally-ho!”

That was last Tuesday. Today is Monday. I’m getting better but that’s like someone with leprosy saying that they didn’t lose any digits the day before. My whole left side of the body’s immune system is screwed. Lymph nodes out of whack, you name it, and all on the left side. The good doc reckons that the little buggers were either in my bowels or in my bladder. He gave me a bunch of stuff to take but also told me this:

“Drink beer. Beer is really good for clearing out your insides. Particularly if the little nasties were in your bladder.”

END_OF_DOCUMENT_TOKEN_TO_BE_REPLACED

I’m still unsure of this whole Gab business. As far as I can tell it’s entirely populated by those of an alt right political persuasion. Even though I identify and agree with many of the alt right’s tenets, an echo chamber is still an echo chamber and a group love-in is still puke inducing.

The problem is that those two things do not go together. My brother told me that I should be on instagram. Doesn’t he know that I don’t own a fucking camera? I don’t even have one on my phone. If I’m ever in a car accident I’ll just have to get out of the car and pretend to take pictures of the damage so the other party who is obviously at fault will get all intimidated and stuff.

END_OF_DOCUMENT_TOKEN_TO_BE_REPLACED

Tim Newman alerted me the other day to one of his old posts which is titled Why some countries are poor. His idea is that it is a lack of trust which separates poor countries from rich ones. He cites examples from Russia and Nigeria that demonstrate how a lack of trust hamstrings business development. I agree with his assessment and I think that this lack of trust contributed to my own feelings of alienation and loneliness when I lived in low trust countries such as Uganda.

Dalrock has a post up today about the effort to classify divorce as not being a failure. There has been an effort by progressives for some time to reframe the idea of marriage as being non-permanent. In other words, it is permanent unless something goes wrong, when it ceases to be permanent. If a man walks out on his family then he is “bad person” but if a woman walks out on her family then she is “empowering herself” while she goes off on her eat pray love journey of self discovery.

END_OF_DOCUMENT_TOKEN_TO_BE_REPLACED

This article with Clint Eastwood and his son in Esquire is one of those times when you read something and you just nod along in agreement. So many great little snippets of wisdom from the man himself about dealing with life. The title of this post is one of the things he said. Initially it was in a humorous reference to his style of acting as Eastwood is well known for omitting lines from a script in favor of a long stare down. But then his son Scott made this comment:

I don’t remember how old I was when you told me this, Dad. But you said, “As an actor, I never went back to my trailer. I always hung out on set and learned.” That stuck with me. I’m on this Fast and the Furious movie right now, and everyone goes back to their trailer. I stick around and say, “Why you are setting up the shot like this?” I want to learn.

END_OF_DOCUMENT_TOKEN_TO_BE_REPLACED

Would you put up this flyer? 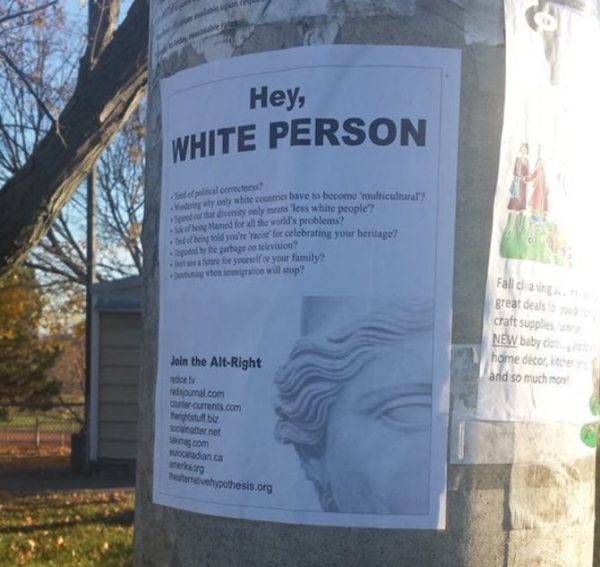 This flyer has gone up around Toronto which I discovered courtesy of Amerika, the alt right site. The flyer reads as follows:

END_OF_DOCUMENT_TOKEN_TO_BE_REPLACED

My piece on culture that I wrote the other day was cross-posted on XYZ online magazine. One of the comments caught my eye:

Excellent insight on the left-right issue, though if you are referring to ‘race’ when you mention the ‘color of people’s faces’, then you lost me. Culture has nothing to do with a person’s race.

I have pondered this at length as it did not sit well with me. If culture does not have anything to do with race then what is it bound by? Race means many things. As The Z man states it is made up of biology, ancestry, and heritage. Although he is referring to tribalism and national identity I believe that this is concomitant with race.

END_OF_DOCUMENT_TOKEN_TO_BE_REPLACED

An article from The Guardian accuses Facebook of failing to clamp down on fake news that contributed to the echo chamber during the US election. Sounds pretty good to me until you realize that they are calling this a “uniquely Republican problem”. I could link dozens of articles from the last two days to emphasize the same point. The left are not going to learn anything. They are going to double down, convinced that the problem is one of the populace voting the “wrong way” and that their message was good but just wasn’t heard loudly enough.

END_OF_DOCUMENT_TOKEN_TO_BE_REPLACED

The modern world has changed. Things that we have taken for granted are no longer as they once were. The Brexit result earlier this year hinted at this massive upheaval. It was there in plain sight if you cared to look. Most people chose not to; not because they could not see but because they did not want the unthinkable to be true.

Those who are paid to forecast these events could not even see it when it was staring them in the face. They cannot see it even now. The mainstream media, the pollsters, and the political class collectively failed to do their jobs. If Brexit was the crack in the dam wall then the Trump victory was the tumultuous sea that crashed into the cosy world of the global elite and swept it aside in triumphant disdain. The day after the election the pundits do not know what has happened. A clear and careful analysis would reveal that everything they have built their careers on is no more. Their jobs depend on them not seeing and so they will remain blind to the end.

Writing yesterday in The Australian, Greg Sheridan, who three days ago made the assertion that Trump would never win, was at a loss to explain the result. In his own words he got his predictions spectacularly wrong. In an attempt to explain the unexplainable, Sheridan fell back on the trusty divide of left versus right. But the problem that he faces is that these definitions no longer seem to fit what is happening. Sheridan cannot understand it. His belief is that the US now has two left wing parties. How else to explain Trump’s policies and platform? He lists them off – Trump is a protectionist, Trump is anti-free trade, Trump wants to spend money, Trump wants to withdraw from the global sphere and become isolationist. All of these are classic leftist ideologies.

END_OF_DOCUMENT_TOKEN_TO_BE_REPLACED 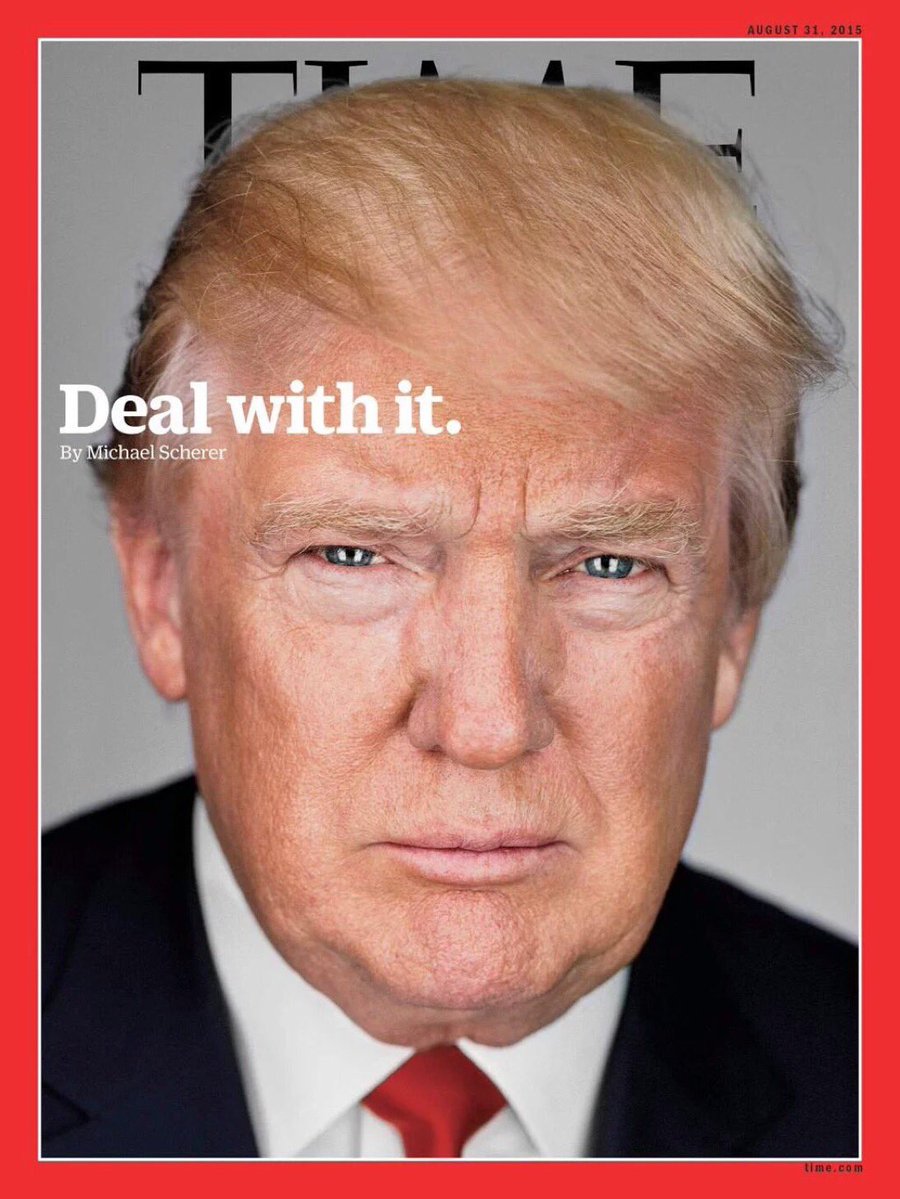 Ok, maybe not every state. But that would have been a hell of a call if it came off, right?