What does mazungu mean, I hear you ask, and that makes me sad because it tells me that you haven’t read my first book. Mazungu is the name that East Africans give to white people. So if you’re reading this and you’re an oppressor of minorities, you’re also a mazungu to boot. Everywhere I went in Uganda I would be greeted with the term. If I walked into a store the clerk would sneer at me and say, “Mazungu.” If I hopped on a matatu bus I’d get the same from the conductor. Then I’d make my way down the back, (the safest spot), and I’d sit next to a woman cradling a chicken. “Hello,” I’d say. “Mazungu,” she would reply to me.

Once I was driving alone in a remote area adjacent to the river Nile. It was on a dirt road the color of dark orange. The land was bright green, flat, and treeless. In the distance I spotted a lone tree. It was enormous, its branches fanning out in multiple layers that provided welcome shade from the equatorial sun. Beneath the tree sat a large group of young school children. They were having a lesson under the tree while in the far distance their small schoolhouse baked in the heat. I stopped the car to have a stretch and one of the little boys spotted me. He jumped to his feet in a flash and pointed. His mouth formed a word that I could not hear from that distance but I knew what it was.

And then they came running. Fifty little five year olds stampeded en masse towards me across the broken ground. They were running in abject excitement for they had heard stories of these people but they had never seen one before. And as they grew closer I heard the word that poured from their lips, endlessly repeated in a chorus of breathless renewal, like hundreds of crickets that suddenly begin their incessant cacophony as dusk falls.

I suspect that the loose translation of the word was something close to ‘white honkey ass’. But I never had a problem with it. I never encountered any white people that had a problem with it. Apart from being a descriptor it could easily be used as a form of racial insult. But so what? I always laughed in their silly ignorant faces.

Particularly when the locals were trying to extort money out of me, which was all the fucking time. As a mazungu you were a walking bank machine, at least as far as the locals were concerned. Saying no and protesting at their demands was counter-productive. It indicated to them that there was a possibility they could wear you down. The best response was to laugh at them. The more they demanded, the more I laughed. People don’t like being mocked for trying to extort you.

I thought that Africans had hit their extorting best with the ingenious Nigerian email scam-artists. But someone has gone one better. Move to the USA and extort gullible white people with guilt about them being white supremacists. It’s called The safety pin box and it’s pure extortion genius.

Safety Pin Box is a monthly subscription box for white people striving to be allies in the fight for Black Liberation. Box memberships are a way to not only financially support Black femme freedom fighters, but also complete measurable tasks in the fight against white supremacy.

You see that? Not only do you get to massage away your white guilt with a monthly subscription but you also get to complete measurable tasks so you can compare yourselves to other whites in your social circle. Get white people to pay you and then do work for you as well. I mean, this is sheer fucking genius.

Notice how the word white is in lowercase while black is uppercase? Funny that. Who is behind this amazing business idea? (For a business it is. This ain’t no charity and the sisters don’t want to be bothered with all those pesky charity regulations. From the FAQ):

Safety Pin Box is a business, not a charity. Subscriptions are NOT tax deductible. You are purchasing a service & product.

Anyway, so who is behind it? Why, two black “femme freedom fighters” of course.

Did you get that? A “first generation American” which is a contradiction in terms if I’ve ever seen one. Move to the USA, call yourself oppressed, extort money out of dumb whitey = profit.

Marissa is a speaker, writer, and consultant, specializing in political agitation in Black liberation movements. Drawing from her recent contributions in the Black Lives Matter movement, Marissa currently works with high school and college students organizing within their learning institutions and is currently working on a book documenting her radicalization.

I can’t wait for that one to come out. We might find out where she moved from as well.

So how does it work? Well, first you have to be terribly wracked with guilt at your own whiteness. I know what you’re thinking – surely there can’t be people this stupid who are willing to give these two scam-artists their money. Oh really? 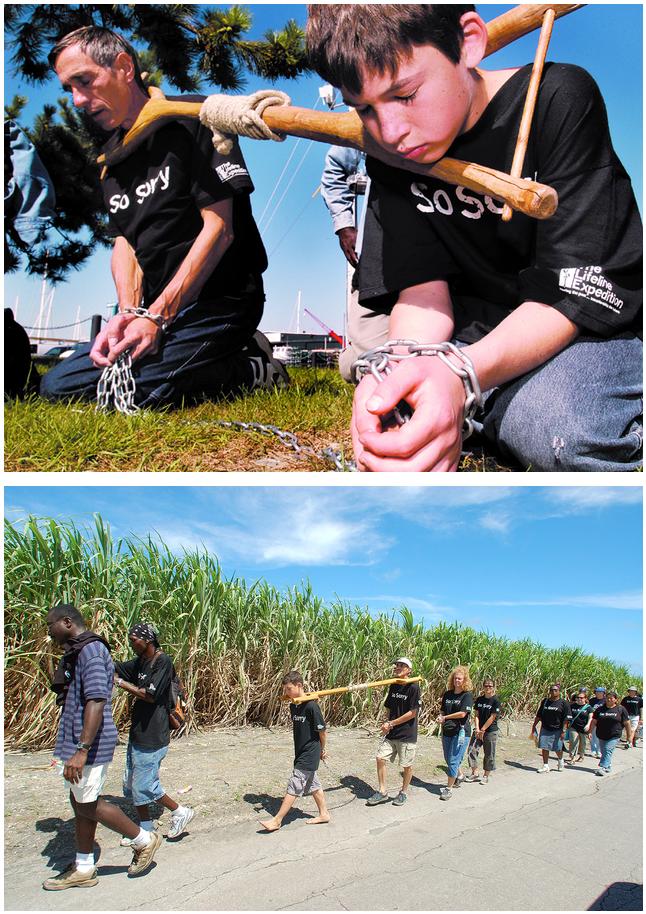 Okay, so once you’ve discovered that you’re tormented with guilt for stuff that you never did, it’s time to proceed to phase two. There are a bunch of different monthly subscriptions of which you can partake. The top one goes for $100 a month. What does that get you?

A physical “safety pin” box shipped to you with guided ally tasks for the month. Tasks will vary in scope from individual to group assignments, and task categories include data collection, personal development, influencing your networks, and showing radical compassion. Tasks are designed to be completed within the month and members are encouraged to document their work and collaborate with other Safety Pin members online to complete projects.
Plus:

I just can’t wait to show me some radical compassion. And a special free gift after one year! I wonder what that might be? Some black paint perhaps, so you can fit in a bit more easily? But for the outright number one genius idea, how about the $50 “Revenge Box”?

The Revenge Box is our current single use box ($50 per box). Send this box to a Trump supporter, bigot, or white supremacist of your choice. You can include your name or send it anonymously, and the box includes:

• A small box sent to the person of your choosing stating that a donation to an important cause has been made in their name.

• The box includes an encouragement to recipients to “see what their donation helps support” and a link to a website that features highlights of the current movement for Black lives and stories of Black excellence.

If someone could send one of these boxes to me that would be awesome. I hope that there’s a white supremacist badge in there as well.

In the olden days, back before progressives got their hands on the power controls, there was this institution called “The Church”. The Church bound together society in a morally cohesive manner. If you were feeling a bit guilty at all the naughty things you had done then you could go to The Church and purchase what was known as “indulgences”. You would be relieved not only of your money but your guilt as well. It worked well all round.

But with no more church, how are the poor white supremacist masses supposed to pay away their guilt now? Step in the Black Hustler Movement to the rescue.

Me, I’m quite content with my status as a mazungu. And I know how to deal with shysters such as these. Laugh and laugh very loudly. And anyone who proudly supports their business model should be laughed out of existence. After all, they’re on Facebook.

A big shout-out and h/t to David Thompson for the link and one of the images that I used.

Afternoon links & the hawt chick of the week.