What do cats and school have in common?

What do cats and school have in common? Nothing, but I’m going to talk about both today as I can’t make up my mind which to write about. Let’s start with school, specifically schools in Australia. It turns out, shock horror, that while people might be very outwardly positive and vocal about bringing those “poor refugees” to Australia, when it comes to sending their own kids to school with them it seems that they’re not quite as keen.

Nonetheless, these public and private schools in Sydney’s north epitomise a broader racial polarisation within our school system, an ethnic divide that has academics and community leaders concerned we are creating schoolyard monocultures that fail to reflect the increasingly diverse society in which we live and work.

The local council, City of Yarra, says the district has been a proud “Refugee Welcome Zone since 2002”. Yet in Fitzroy, Carlton and surrounding suburbs, progressive, middle-class families have been accused of shunning public schools with high refugee populations.

A basic tenet of the manosphere is that you listen not to what a woman says she wants but you simply watch her actions. Likewise with virtue signaling luvvie-lefties. Listen not to what they say but watch what they do. I have no issue with them desiring to put their kids into a school with racially similar children. I simply have an issue with them being complete hypocrites.

This year, self-described “book whisperer” and “PC lefty” Alice Williams bought into Melbourne’s heated schools and ethnicity ­debate and was surprised to find herself the target of “Twitter hate” from other PC lefties. Williams was called a racist — a charge she vehemently denies — after she took issue with the claim white families bypassing multicultural schools were racist.

It must be so shocking for PC lefties when they diverge slightly from the accepted PC line and discover the same tactics that they routinely use on others being used against them. My heart verily doth bleed.

The author, blogger and mother of one had argued in a comment piece published in The Age that it was “obnoxious” to argue that high-achieving students should remain in disadvantaged schools and “sacrifice their own education to somehow drag up the level of their peers”.

But somehow it’s not obnoxious for her to denigrate all of us who objected to bringing in these hordes of culture enrichers in the first place.

Just down the road from where I live is the old and venerable institution known as Melbourne High School. A school has operated on the site since 1854 which for Australia is really old. The other month I took a train to South Yarra train station which is located right next to the school. It was mid-afternoon and I arrived just as the schoolboys converged on the station en masse at the end of the school day.

What I saw surprised me. Nearly every boy in his smart school uniform was Asian. Out of the hundreds of boys crowding into the station I counted a bare handful that were of Anglo Saxon extraction. A quick perusal of the photos on the school’s website confirm this reality.

People self-segregate along racial lines. It has always been this way. Just what the proponents of multiculturalism thought would happen when they swamped this country with foreigners is beyond me. But the proof is in the school pudding as they say, and not even the most fanatical refugee advocate can pretend that they want their own children to go to school with those for whom they publicly profess such solidarity.

Now on to cats. I will simply quote the title of this article in full:

All hail the rise of cat men, an antidote to toxic masculinity.

“I feel they can give you that real dedication that a lot of animals can’t. And even though they can be a bit aloof, when they bond with you, there’s nothing like it.”

As he speaks, one of the 15 resident felines at the cafe — a large, fluffy, white creature — struts past, its proud confidence commanding our attention.

“That’s Jasper,” Mr Loughran nods, as another cat curls around his leg. “He’s our dominant male.”

I don’t think there’s a snowball’s chance in hell of Mr Loughran ever being mistaken for a dominant male. 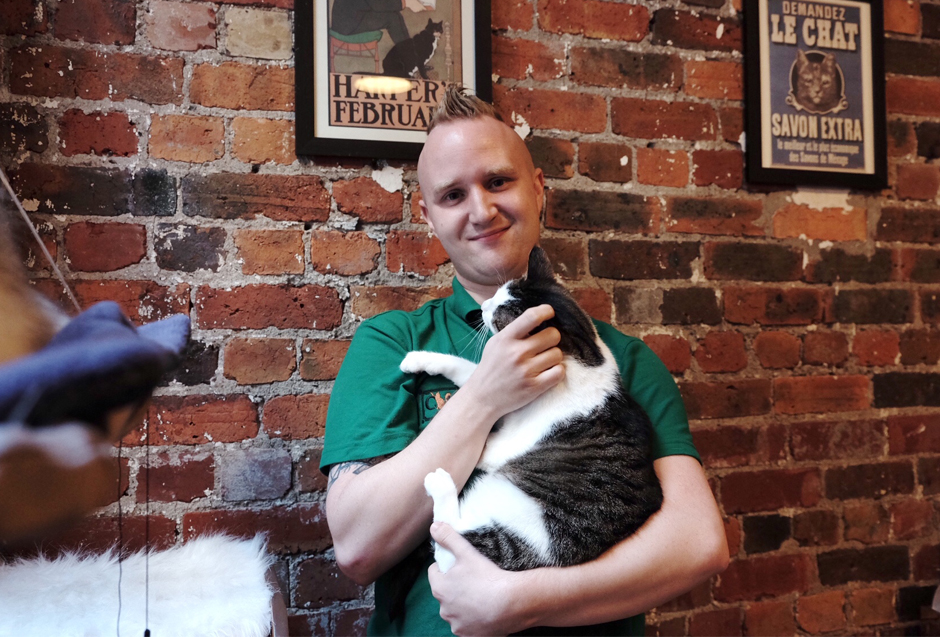 Everybody knew that Trump would win.