Have you taken the Ku Klux Klan rafting?

Apparently whitewater sports are all about power and privilege. Who woudda’ thought it? I wish I’d had some of that privilege when I was a broke rafting guide. That period lasted for, oh I don’t know, about five years. I bet my old rafting buddies wished they had had that power too. You know, the guys who taught the Nepalese boys how to raft back in the early 90s and then got turfed out of the country once the locals had the requisite skills. No white dudes here, thanks very much.

The progressive Left needs to create victims. They are in the victim industry. Find a group that are supposedly unrepresented, write convoluted and unreadable papers on the terrible burden that these minority victims have to carry through life, and finally when nobody can understand what they’re on about they can then fall back on the tried and tested method of getting everyone’s attention – the ad hominem attack.

In this case white people who enjoy outdoor activities are racist. Why are they racist? Because black people would rather spend time shooting hoops than going on a rafting trip. The article is called, Whitewashing outdoor adventure – the subconscious role race plays in our community. It was written by someone called Kelsey Gaffigan, and it is the natural progression that follows once you invite lunatics to go paddling with you. Kelsey is studying sociology at university, (what a surprise and good luck finding a job, sweetheart). The article is actually a paper that she wrote for one of her classes and it’s a good example of what passes for coursework at so-called institutions of higher learning these days. A few paragraphs in we get this sentence:

If race is just a construction then what are we even talking about? Sounds like her entire argument ended right about there. But no, we will persevere.

Gaffigan goes on at length about something called “colorblind racism”.

Colorblind politics are ways in which the dominant racial group (whites in America) understand and articulate our social world as if race is no longer a factor and is “central in the production and reinforcement of the status quo” (Bonilla-Silva 2003: 26).

Who is more racist – the person who acts as if race is not a factor or the interfering busybody who runs around attempting to shame people into believing that instead of enjoying a whitewater activity, they’ve merely been horrible racists all these years for not inviting their non-existent black friends to come along?

Gaffigan wants us to believe that race shouldn’t be a factor while making race more of a factor than anyone I’ve ever heard of in the 30 plus years that I’ve been involved in outdoor activities. It’s not clear what result she hopes to engender in the coming years in the outdoor industry apart from the ubiquitous “More black people!” How many more black people will be enough for our esteemed sociology major? Does she require a quota system? Or perhaps she will meticulously trawl through statistics of national demographics where she will conclude that based on a percentage of the population we will require 18.3% black participants in future outdoor activities. That will be a bundle of laughs:

“I’m sorry everyone but our rafting trip has had to be cancelled today due to us only having 11.3% black participants on the trip. We didn’t meet our diversity quota.”

But what about Asians and Latinos? Where are their representations amongst the outdoor demographic? How incredibly colorblind of Garrigan to omit such important minority groups! I can’t imagine how oppressed all those people must be feeling, and if they don’t know they’re oppressed why we have Kelsey Gaffigan ready to let them know.

The thing with identity politics is that once you go down that route you open up a little can of worms. People in the outdoor industry don’t think along the lines of race. Anyone is welcome to come rafting or whatever activity you’re doing. It has always been the case. But if you start this business of selecting people based on racial representation then don’t be surprised when white people begin deliberately self-selecting along the same lines. In case you guys in the USA didn’t notice, you just had a national election where that exact situation happened.

Attempting to force people into doing an activity purely because people of their race are “under-represented” is just about one of the most racist things that I’ve ever heard. How wonderful it must be for a black person to be told that there is yet another example of them being marginalized that they weren’t aware of. I’m sure that hearing this news will cause them to rush out and purchase a life-jacket at the first opportunity. Just as I would be absolutely thrilled if the local Chinese community approached me with a request to join them in their badminton society because they need a token white guy. Hey – they really want me for me! [/sarcasm.]

Kelsey Gaffigan is a trouble maker, creating problems where none exist. She is also a hypocrite. Here is a photo of Kelsey and what I assume are either her friends, family, or co-workers that I appropriated from her public Facebook feed: 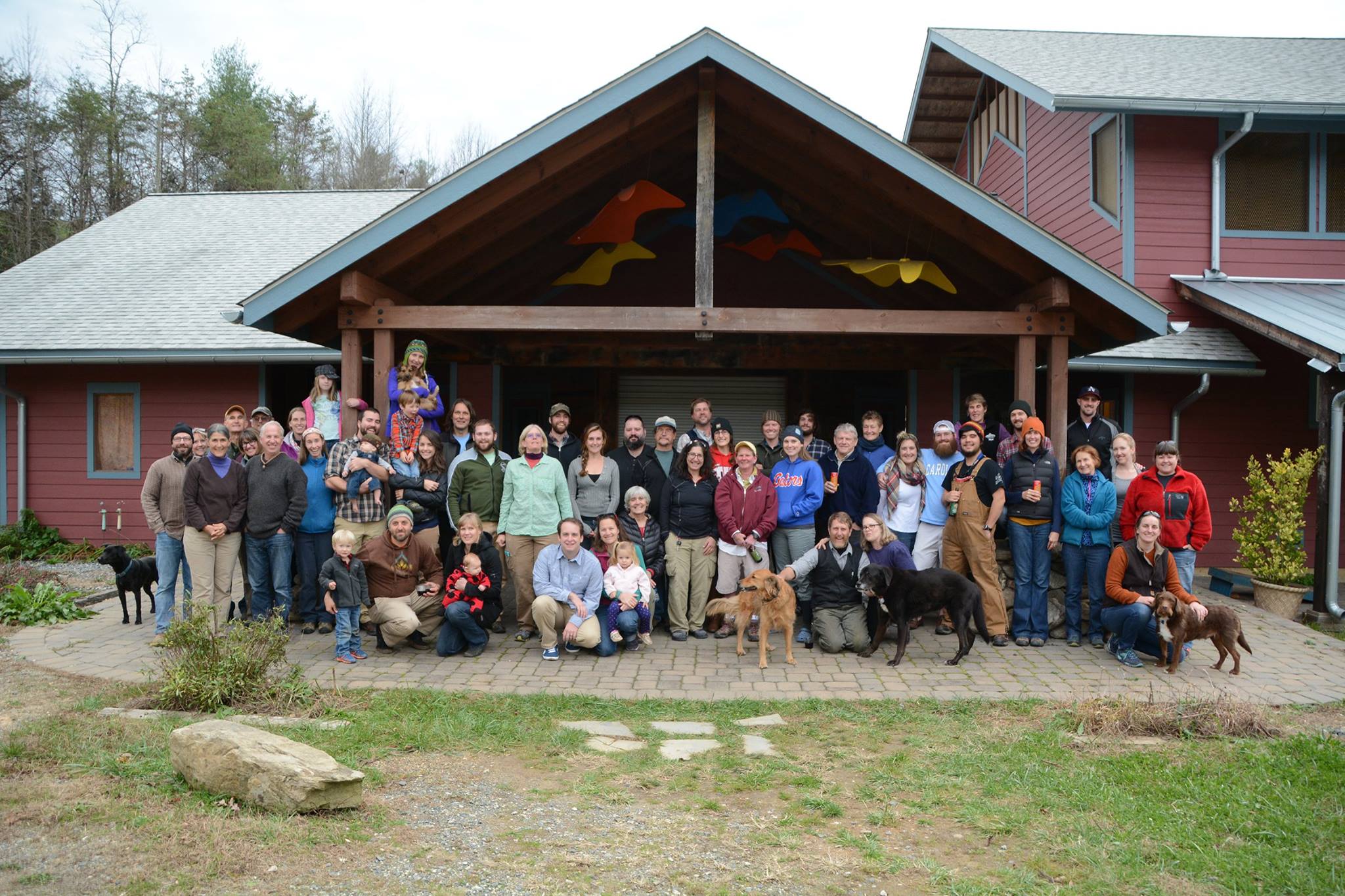 so much white – it blinds the eyes!

The truth is that most of my photos look the same, (excluding the ones from Uganda of course). There is nothing wrong with this. But Kelsey and her ilk would have you believe that this is wrong and that this is evidence of your underlying racism. Which is what makes her a hypocrite, (although she does have a photo of her with a black dude on her raft! Way to go, Kelsey!)

Mind you, perhaps Kelsey is playing this very smart. I mean, she will have a very expensive degree to pay off and sociology jobs are as rare as the forementioned black dude on a raft. Perhaps this is her merely positioning herself to solve future problems for outdoor operators, problems that they didn’t even know existed. Kelsey can come in and help them to meet their diversity targets! (Standard daily consulting fees will apply.)