All the links fit to print, plus the hawt chick of the week.

Good morning my fellow deplorables, erstwhile seekers of comely lasses with heaving bosoms, devourers of inferior intellects, and pulverizors of progressive lunacy everywhere. It be Friday, and I have decided that this is from now on, rock-solid, my solemn promise, fingers crossed behind my back, absolutely positively 100%, the day where I shall from this time dedicate to links, hawt chicks, and mutinous ravings.

Until I forget or change my mind.

So let us begin, beyond the break awaits countless goodies for the intrepid adventurer!

#FakeNews. You know the drill, it’s one of the progressive Left’s desperate ploys to invalidate the Trump effect. First they had the rioting and demonstrations, then it was the recounts, then it was Zee Russians!, then it was the fake news. Maybe it wasn’t in precisely that order but that’s what I’m going with, (CWIDT?)

Anyway, here is Obama about a month ago making his implored speech where he implores the “journalists” to root out all these bad fake news outlets everywhere. The “journalists” lapped it up and obediently ran to their electronic devices and began their scurrying into this corner and that corner to finds zee fake news.

It seems to me that journalism standards have fallen just a touch.

Nassim Nicholas Taleb examines the Syrian civil war. Taleb is very smart and he is himself a Syrian which means he has skin in the game. Here is his chart but you’ll want to read his brief explanation by following the link. 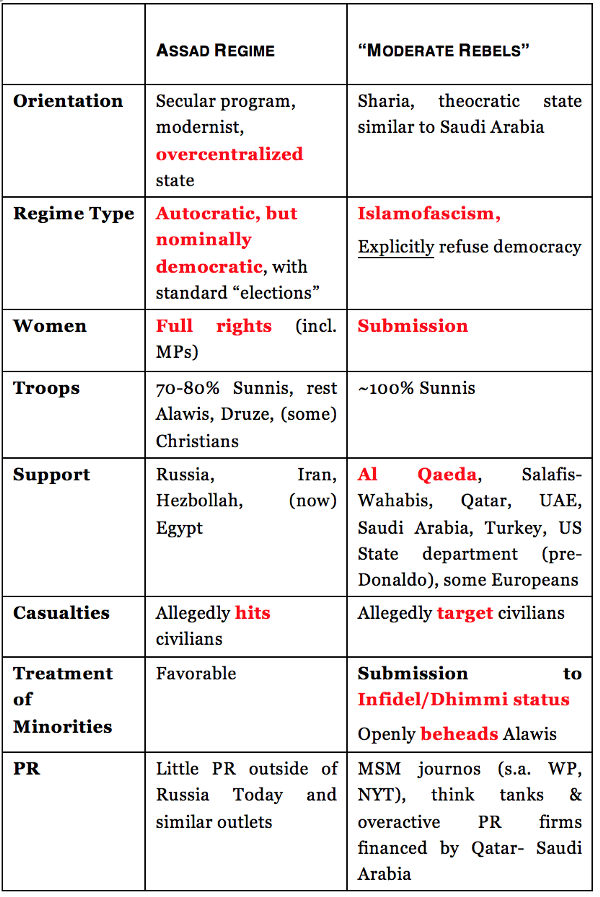 Joe Rogan interviews professor Jordan Peterson. Without a doubt the most impressive podcast I have ever seen. I have so far watched it twice but that count will increase quite a bit.

Not being willing to date a tranny makes you a bigot. The correct response is of course, never stick your dick in crazy.

For the pointy-heads amongst you, an excellent examination of the future of NATO and the EU.

Courtesy of the Woodpile Report, here is a poster that has begun appearing around Seattle. 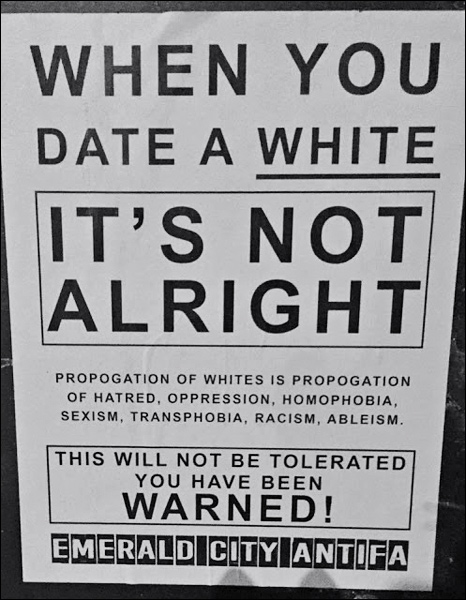 ANTIFA are the anti-fascist brigade, far-left loonies whom we also have here in Melbourne. This poster is disturbing on a number of levels. Although it is undoubtedly racist against whites, it does not actually threaten whites but in fact threatens black people who might have been considering hooking up with the hot white people. In other words, to protect black people from white racism, ANTIFA threatens black people with potential violence and oppression so that they will not suffer violence and oppression from the racist white people.

How do these people manage to tie their shoelaces in the morning? It brings to mind this scene from The Life of Brian.

Whew, after all that I suppose there’s only enough room left for the hawt chick of the week.

Teachers are now afraid of the ideologues that they have created.