I support total and complete discrimination.

One of the Left’s big bugbears is discrimination. This is of course a blatant smokescreen to hide their ever-growing lust for power. If we remove discrimination then we remove choice, and if we remove choice then we will have no power. The only ones with the power will be the Left who were manipulating us into accepting their “diversity targets” all along. Funny that. Want a better example?

How about this little screenshot that Robert McCain drew our attention to? 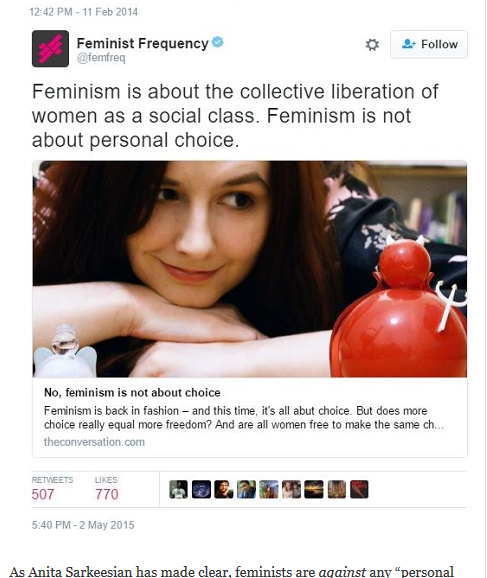 Feminism is not about personal choice. That’s the nice way of feminists saying to other women, you better get with the program, bitch.

Believe it or not, and maybe some of you younglings out there might not believe it, but our free market economy and wealth was built entirely on discrimination. Everything in our lives happens in this way. Let me give you an example:

Examine your own life. Look at every aspect where you discriminate. Are you looking for a new flatmate? Do you want the power to be able to select the person who shares your home or would you prefer to have someone on the Left dictate to you whom the choice must be? If you want to pick them yourself then you discriminate against all those poor people that missed out. Aren’t you a heartless bastard!

No, you’re not. You are exercising your free right to choose in a free market society. Choice is simply another word for discrimination. It’s hard to demonize a simple word like choice because we all know what it means. Much easier to turn people against another word that means essentially the same thing but doesn’t seem to when presented in a deceitful manner.

Celebrate your own discrimination. Every time you choose something then you discriminate. It is your great freedom. In the Soviet Union you were barely able to choose anything. In Mao’s China you weren’t even allowed to choose your husband or wife. The state did it for you. Think about that the next time you walk past a fat chick with tattoos and blue hair.

The truth is that we now live in crony capitalist systems with huge amounts of socialism tacked on with no discernible pattern. These highly regulated labor markets only serve to limit choice – workers’ choice and employers’ as well. Daniel Mitchell has another excellent post explaining some of the unintended consequences:

All of these policies, while initially brought in with the best of intentions, merely serve to limit the ability of people to make choices concerning their own businesses and employment – in other words the ability to discriminate.

Another variant that is becoming more common is the use of creeping credentialism through certificates and diplomas that entry level employees now need even to do the most basic of jobs. Far from giving the prospective employees much needed skills, (skills they are much more likely to get on the job while being paid), these credentials serve as a barrier to entry for young people attempting to break into the labor market. Add to this ridiculous and over the top health and safety regulations and employers are often left with nowhere to turn when considering a new hire fresh out of high school.

It was hard enough for me to break into the labor market almost thirty years ago without all of these barriers to entry. I shudder to think what it is like for young people in today’s hideously distorted market.

In all of these examples it is government intervention which serves to create anti-discrimination situations. The problems that are created are then solved with more and more government intervention. So the young man who can’t afford a horticulture diploma so he can get an entry-level job in a nursery applies for a government grant to complete the accreditation. And on and on it goes.

A note of thanks and a hawt chick!

All the links of the week that a hawt chick can read.