I am heading home thus posting will be light, (read non existent.) But a few things of note:

The good Cappy is also traveling around and he asked me for some assistance to keep his site ticking over. When the bell rings I answer! I gave him my thoughts on the performance review.

My post yesterday mentioned the women’s march and how they’re all just annoyed climate change morons. Then I saw this photo courtesy of Maggie’s Farm: 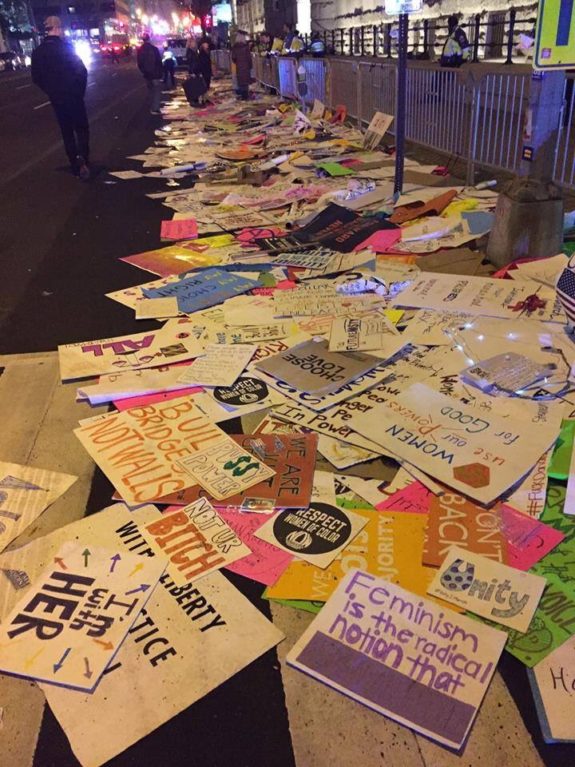 Hmmm … perhaps not? But then, the left are always such complete and total hypocrites so maybe I was right on the money.

This idea of a ‘women’s march’ was amusing to me. They seek special status just for being women, much like a bunch of children did who also had a little march during the crusades. That didn’t finish too well for them but at least they didn’t get a chance to breed. Marches – weeding out weak and stupid DNA for a thousand years.

I like this photo. It says so much. Observe all of their placards with messages that apparently they held so dear. Then at the end all tossed aside as if they meant nothing at all. Each of those placards meant so much to their bearers. So much effort put in to designing them and crafting them with the high level of craft skills they all attained at crafting workshop 101. And the messages they held! Picture each of these cat ladies as they diligently attempted to come up with the very best slogan they could think of. A slogan that would set them apart from all the other thousands of cat ladies marching around them. What could they write?

Truly the world has missed such an opportunity to benefit from the wisdom of these grand breeders of feline friends. In essence this march was their last hurrah. It’s over, bitches. You had a chance. To do what exactly we are still not sure. But it is gone. Back to the smelly cat houses for all of you.

A few thoughts on Trump’s inauguration.