You are not more important than your country.

I have always liked this quote but my positive feelings towards it only increase as the years go by and the Left tries more and more to dismantle all that has been carefully built up over time. This morning we awake to an internet gone mad over Trump’s order to temporarily ban entry status to the US from a handful of Muslim majority countries. (Note that the order was not to ban Muslims as is being widely reported in the fake news outlets.)

The protests range across two broad lines. The first is that the implementation has been awful and not worthy of a government anywhere. Primarily it is poorly implemented because it affects people adversely who have been inadvertently caught in the middle. For example, people traveling to the US while the document was signed.

This protestation ties into the second broad line which is the negative impact that the ban has on individuals across the world. Just a brief look at any news site will reward you with a vast array of articles competing with each other as to who can discover the most hard done by story. Meanwhile the Left gnashes its teeth and wails to the non-existent heavens that this is further proof that Trump is literally Hitler.

The USA has been suffering terrorist attacks on its home soil since the late nineties and the bombing of the World Trade center. Almost twenty years later there is still no end in sight and every tactic that has been tried so far has largely failed. It is a war where one side is nebulous and hard to pin down. Trump campaigned on the promise of doing exactly what he is doing right now. A lot of people have been taken aback by this development precisely because of the extremely poor record of politicians delivering on their promises. But Trump is no ordinary politician.

In times of war nations have to make difficult decisions. The reason that this situation has gone on for so long is due to the fact that these hard decisions have largely been avoided. Now some sacrifices need to be made for the good of the nation. In such times the nation comes before the individual. To think otherwise is the height of folly and selfishness. People are screeching that this situation is incredibly unfair. On the other hand, some of us consider it unfair to be blown to smithereens  or gunned down while going about our daily lives.

Ironically enough a number of examples of those loudly complaining about the ban are people who are not even citizens of the United States, such as British athlete Mo Farah:

“I am a British citizen who has lived in America for the past six years — working hard, contributing to society, paying my taxes and bringing up our four children in the place they now call home.

“Now, me and many others like me are being told that we may not be welcome.

“It’s deeply troubling that I will have to tell my children that Daddy might not be able to come home — to explain why the President has introduced a policy that comes from a place of ignorance and prejudice.’’

Mo may call it home but the reality demonstrates otherwise. He is a British citizen which means he is at best a guest of the USA. The idea that national security should be neglected for the benefit of a foreign national is simply not justifiable. It is indeed prejudice – a prejudice in favor of a nation’s own citizens and their lives and safety. Mo can contribute as much as he likes but demanding that this be given precedence over the lives of US citizens is ignorant in the extreme.

But the Left are masters at the art of ignorance. I caught this on Facebook last night: 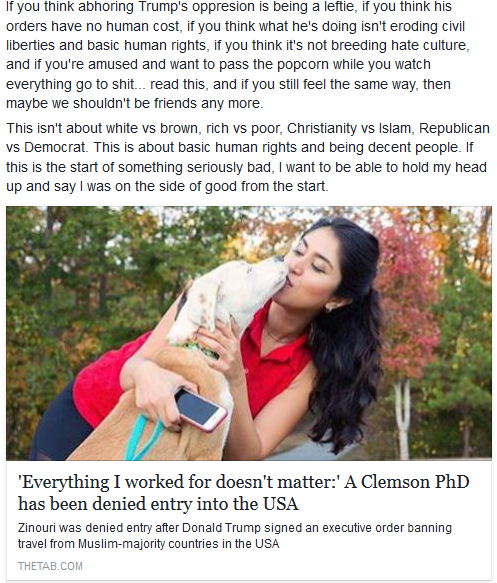 That was posted by a fifty year old man. I leave it up to my sharp-eyed readers to identify all of the falsehoods contained in that statement, (although I do particularly like the claim that this is not about Christianity versus Islam).

But what he says at the end betrays the Left’s hollowness. They want to be seen as being on the side of “good”. Even though this man is in his fifties he still believes in a world of goodies and baddies. At least when we were playing cops and robbers in the playground the kids playing the cops didn’t prance around crowing about how they were on the side of good. It is a clear example of mental regression into adulthood.

The Left live for the outside world. They care not what is happening but how the world will perceive their attitudes to events. The Right take the view of reacting to events based on the reality of the situation. Mike Cernovich’s family are personally affected by the ban as his wife is Persian. But there is no complaining from Mike. He is mature enough to understand that whatever personal hardship his family may suffer, the ban has been enacted for the good of the nation.

Ask not what your country can do for you.

Stop trying to be happy all of the time.