The women’s AFL competition is a complete joke.

Last September I wrote a piece ridiculing the fact that women AFL sportspersons wanted more money to play a sport before they’d even played the sport. The lowliest player in the brand spanking new women’s competition receives $5000 just for turning up. Two days ago the competition launched and the first match was played live on television. I tuned in for purely investigative purposes and after watching about ten minutes of the ‘action’ I can only conclude that these women are grossly overpaid.

Watching women chase a football around a field was like watching women chase a football around a field. It reminded me of being back in school and lounging on the side of the school oval as the girls did their physical education lesson. They were pretty useless at the physical education bit but we weren’t watching for their athletic prowess. A pity then that the women’s AFL is selling the game by attempting to compete with men. How else to describe publicity shots such as the following. 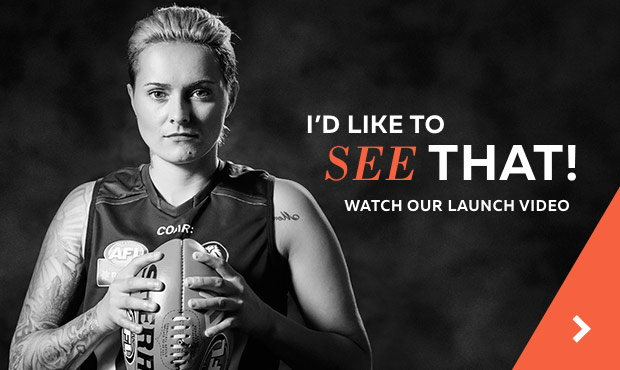 It’s not exactly your dream girl that you want to take home to mum or dad. She even has the requisite tattoo covering her entire arm. Along with the really tough look. Lucky I’m wearing the brown underwear or I’d be in serious trouble.

Lots of people were in the stands watching the game and cheering the players. How wonderful for them all. They must be so chuffed. The Age even described the game as a ‘sell-out’. Which is an interesting use of the term seeing as there was no charge to get into the ground. How something can be described as a sell-out when nothing has been sold is a little bewildering. So no money towards those overpriced player salaries from this weekend then.

It was of course free to get into the ground for the simple reason that the dumbasses who thought up this competition were terrified at the thought of empty stands if they charged people for the privilege of watching women chase a football around a field, and rightly so. This competition has been foisted on a largely uncaring public who might not be so keen to watch women chase a football around a field if they had to pay. Which might have something to do with the awful skill level that was on display. To say that there is a difference in the skill level between the male and female players is like saying that your adorable seven year old niece who insists on performing her excruciating Beyonce covers at family gatherings is perhaps not up to exactly the same level of the woman she is attempting to mimic.

To put the skill level in perspective consider the fact that the Australian women’s soccer team goalkeeper Brianna Davey was one of the best on ground for Carlton on Saturday. The same goalkeeper who managed to let in seven goals when the Matildas were beaten 7-0 by a schoolboys under 16 team. So in between her soccer duties she moonlights for the new women’s AFL. Which is funny as all we’re hearing is that this competition is a dream come true for all the women concerned, and yet they have to ring around the other female sports codes to see if anyone wants to jump over for the weekend and have a crack.

But of course the Australian media has been fulsome with its praise. The Australian newspaper has no less than eleven articles up on its AFL page, and all of them gushing with the sheer brilliance and unrivaled success of the competition. I just wish one of the staff writers would have the balls to stand up and say what a complete joke this entire exercise is. If it really is such a huge success then let’s see them play during the real AFL season at the same time that the men are playing their matches. Let’s see how many television channels will choose to pay big bucks to host the games in direct competition with the networks screening the men’s games. Let’s see how many sponsors are willing to fork out the dosh in that scenario. And let’s see how many people will put their hand in their pocket to watch this level of athletic prowess when they can go and watch the guys play for the same price.

But what am I saying? This isn’t about sport. This is about equality and the new paradigm that women can do anything that men can do if not better. And so the true believers will follow the official line and sing its praises because to do otherwise would be career suicide and they’re not prepared to stand up to the progressive agenda. They’ve never stood up before and they’re certainly not going to start now.

Dear climate alarmists – we will never forget nor forgive.