A couple of weeks ago I saw a post on my Facebook feed from some photography studio that is running a series on empowering women, like that hasn’t been done to death already. But one of the photos caught my eye and not in a good way. 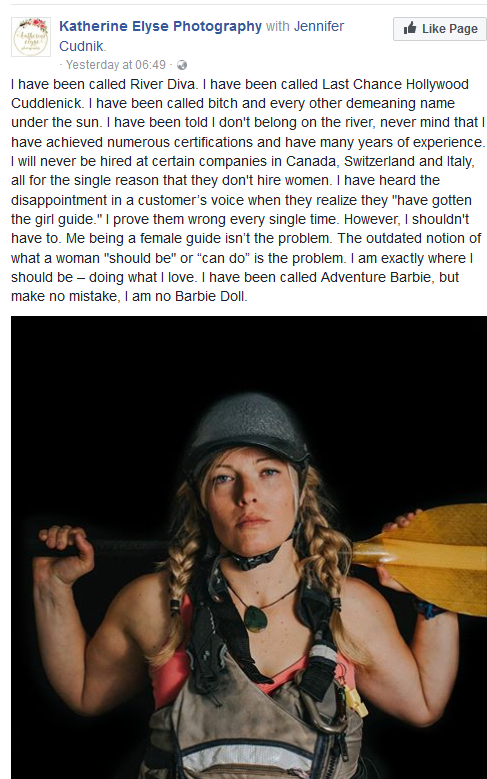 The underlying context here is that the poor female rafting guide would be a huge success if only those nasty men would get with the program. After all, she boasts of numerous certificates so she must be good, right? Funny thing though, I’ve never heard of any half decent rafting outfit giving a damn about certificates. What matters is how good you are on the river, and it only takes one trip down the creek to see that. Frantically waving your certificates as proof of your ability is tantamount to the short guy insisting on how tall he really is.

The fact is that if there are companies in three countries that will never employ you, that’s nothing to boast about. Her perception may well be that they don’t hire women but in reality I suspect that this is her convenient shield that enables her to hide from the world and from certain ugly truths. It is all too convenient for women who are competing in a male dominated industry, and let us not forget an extremely physical industry where people’s lives are on the line, to pass off their professional disappointments as proof of discrimination against their sex.

Anyone who has read my first book will be familiar with my struggles and setbacks as a rafting guide. I have been discriminated against, lied to, and unjustly accused of criminal activity amongst many other bad experiences. These are the variances of life. We all go through them but some of us learn and move on while others choose to play the blame game. My own experiences would make pretty devastating reading if I was a woman instead of a man. They would take on an entirely different context; one very similar to what this woman is claiming.

The thing about blame is that you abdicate your own personal power in the process. This results in you being literally powerless which then results in a photo where you look sad and hard done by. It’s also a huge disservice to the women that work in the rafting industry who are successful by dint of their own efforts. Women who fail and who get seduced by the feminist siren song are doing a disservice not just to themselves but to those women who took their setbacks on the chin and kept on moving forward in spite of them.

Feminism isn’t about lifting women up, it’s about putting men down. The implicit message in the Facebook photo is that all of you men in the rafting industry have been complicit in undermining her success. The default position for men in this circumstance is one of guilt at their failure to get behind “equality”, or as the photo states, “an outdated notion of what a woman should or could be.” This woman’s poor circumstances in her professional life have nothing to do with any failure of hers, rather it is the failure of men that have caused her to suffer setbacks, and if you don’t get with the program and placate her outrage then the predictable label of misogynist shall be placed upon you.

The saddest thing about this photo were the comments that accompanied it. An endless stream of males castigating themselves and their gender with lines such as “we can do better”. These are men who are attempting to make themselves acceptable to women by buying into feminist tropes. Men do this because they see the visual rewards – they are told by society that they are “good men” as defined by the feminist agenda. And it’s better to be publicly told that you are a good man rather than a nasty misogynist.

Keep in mind that rafting is a very masculine industry and that the men in general are usually a cut above the norm. But yet we still see this immediate jump to believe that their own masculinity is something to be ashamed of when any half-baked vixen saunters by with a bad attitude and history to match. The best way to really demonstrate your worth as “a good man” in the eyes of feminism is to denounce any man who has the temerity to stand up and question the motives of the woman who is making the accusation and casting the aspersions. Thus I was on the receiving end of more men than women who were outraged that I wasn’t getting with the program.

This will continue in the future and the end result will be a lowering of professional standards so as to better accommodate feckless women who have no business being in the industry. It is the natural order of things and one only has to look at modern military forces in the Western world to best see this in practice, (not to mention fire and police departments).

Personally I know that this woman is lying. I worked for ten years in Italy and I would challenge her to publicly name this company who supposedly will not hire women due to their gender. I also worked in Canada so I challenge her once again to name names. And I have many contacts in Switzerland whom I am sure will provide me with accurate information if I request it. I have no doubt that this woman was called a bitch because she is one.

Men are continually shamed by the feminist agenda for not “manning up” but a woman cannot tell you how to be a man. Until men actually do man up and tell these female harpies to get out of their industry and get back in the kitchen where they belong then we will continue to suffer this ridiculous situation of women who do not measure up and who subsequently contribute to destroying industry standards, and all aided and abetted by men who debase themselves by constantly seeking feminine approval.

My message to women who want to join the rafting industry is simple:

The bar is here. If you can get there, great. If not, go away. Lives depend upon it.

Gay marriage and the Chesterton fence.