Just over a month ago a story on Zero Hedge reported on the apparent leaking of a new Trump executive order regarding the US H-1B visa system to “make the process of H-1B allocation more efficient and ensure the beneficiaries of the program are the best and the brightest.”

The article also displayed the following screenshot of Trump’s thoughts on the skilled immigration issue just over a year ago. 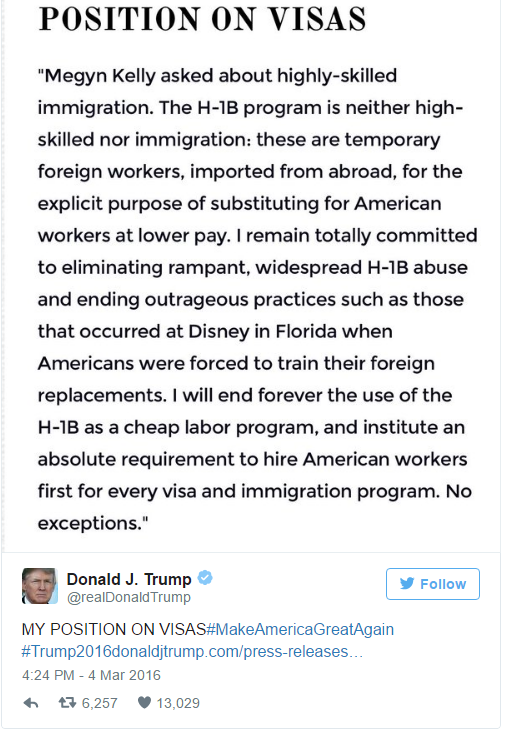 Australia has a similar visa for apparent “high skilled” temporary immigrant workers – the 457 visa system. I say apparent due to the following headline which I chanced across this morning.

McDonalds, Hungry Jack’s and KFC will be barred from sponsoring foreign workers on 457 visas, which are intended to fill temporary skill shortages.

For many people of my generation a job at McDonalds or KFC was our first step into the workforce. I got a job at McDonalds when I was seventeen and I learned to be punctual, to be polite, to work in a team, and to respond to minor crises. I volunteered for the early delivery shift and I used a forklift to unload the food truck and stack the pallets in the small loading dock. I was promoted to running the pass on busy shifts, and believe me when I tell you that Town Hall McDonalds in Perth back in the late eighties was as busy as it could get.

So I must have missed the memo that described fast food workers as being skilled. I was skilled when I left that job but I wasn’t skilled when they first hired me. Which is kind of the point. These jobs are entry level positions for young people to begin their careers in the workforce, and as such they are highly valuable.

That the previous Labor government, which supposedly is the party of the working class, would have signed such a deal is not surprising. As those of us on the alt right have been fond of saying for a while, it is no longer a battle of left versus right in politics. It is now a battle of globalists versus nationalists. And as a nationalist I find it inconceivable that an Australian government would willingly sign away these low skilled jobs to temporary foreign workers. Unless the same government desired to transform Australia into a nation of welfare robots dependent on government.

I suspect that the Liberal government and Immigration Minister Peter Dutton have discovered some semblance of spine in President Trump’s recent example. But we need to go further. As long as there are Australians out of work, whether skilled or unskilled, then there should be no reason for Australian employers to utilize the 457 visa system.

A common complaint from employers is that Australian workers’ expectations when it comes to salary are too high. That may have something to do with the extremely high cost of living in this country as opposed to other parts of the world. My monthly rent when I lived in Italy was less than one tenth of what I pay here in Australia. But passing off high wage levels as an excuse just creates a vicious circle which becomes a self-fulling prophecy as firms become addicted to the low wages they can pay overseas workers.

I also find it hard to believe that Australians are demanding such high incomes when you consider how many graduates are forced to work as baristas just to pay the rent. In any case I suspect that demand for fast food jobs would skyrocket if the unemployment benefit system was competently overhauled. Young Australians in general don’t work because they don’t need to work. While young people are expected to lack a certain degree of foresight and common sense it is instead a damning indictment of our leaders that they would sign away the skill levels of future generations in this way.

Two podcast episodes for you to disagree with.