The links, the hawt chicks, and nothing but.

Another week, another Friday, another hawt chick. How many hawt chicks can there be? Answer – a lot. If you’re a hawt chick reading this then maybe that makes you not very special at all. Who are we kidding? You’re special because there are a lot more men who want to interact with hawt chicks than there are hawt chicks. Take me as a case in point. I post a weekly hawt chick. I don’t post a weekly fat chick eating at Wendy’s. Maybe there’s an audience for that but I don’t want to find out. I don’t care about my audience that much. I care about me.

Onto the links. And the hawt chick. Not eating at Wendy’s.

Yesterday I wrote about the prospects of Europe versus Australia. I said that multiculturalism is a very bad idea. “If anyone in the world can be of your national identity then you have no national identity.” That was the money quote. Today we have a piece by an Australian freelance journalist in The Daily Telegraph titled I was born in Australia and I don’t want to assimilate. Oh me, oh my, how on the money am I.

I’m sorry to disappoint you, but I was born in Australia and I am not interested in assimilating.

Assimilate and integrate into what? Australian society? Isn’t Australia a multicultural society made up of different people, cultures and faiths? Maybe what the government actually means is Anglo Saxon Christian Australian society.

She’s not disappointing me at all. It’s wonderful that she’s proving my point so well for me. They’re not even trying to hide it now.

Since when is knowing fluent English proof you’re a true blue Aussie? Isn’t the language of Australia the hundreds of indigenous languages? Lucky Section 18C is still intact and the words “insult”, “offend” and “humiliate” were not replaced with “harass” because I am terribly offended right now.

This is what happens when you let women out of the kitchen.

Do you see? White Australia as an idea is intrinsically racist. Do I need to keep quoting? The woman was born here but does not consider herself to be an Australian. It is amazing that she even speaks English. She should be speaking one of those hundreds of indigenous languages, whatever they are. Multiculturalism is a lie and betrayal. Send all the #Fake Australians back.

The Z Man wants to bring back smoking because apparently it made us smart. I’m hip with that. Pass me a cigar.

Apparently all you have to do to be a scientist is to say you’re one. Like Bill Nye. Who is into pushing really creepy sex videos. And who has less science credentials than someone you may have thought was really dumb. 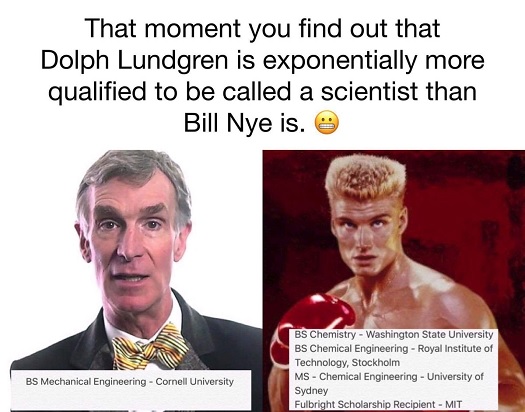 The term “Fascist” is the Left’s new ad-hom of choice. Hint – there are no Fascists in the West. None at all. Fascism denotes a militarized political arm for enforcing political conformity through violence. The closest that any group comes to this are Antifa. But the Left always accuse us of doing what they do themselves. Ace has a nice summation.

Is that enough reading for ya? Okay, here she is. Have a great weekend, kiddies.

The patriarchy is the biggest lie of all.