It’s Australian Fashion week and courtesy of The Australian we have this photo to inspire all young girls out there to get into the modelling industry. 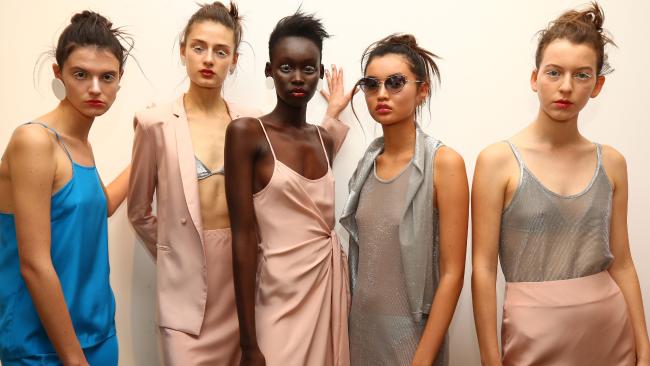 I suppose this is what diversity is supposed to look like. Androgynous stick insects with bad posture, ill defined shoulders, and breasts that collectively might fill an egg cup. What it most certainly does not represent is beauty in the traditional sense of the word. I mean, I know that the left is big on decimating entire populations in order to enact their socialist dream world, but do we have to watch it on the catwalk as well?

I have read and heard and even witnessed explanations from fashion insiders that the models are chosen to not distract from the clothes that hang lifelessly on their meager bodies. That is the convenient excuse. In reality, the fashion industry used to be a gigantic joke perpetrated by homosexual men at women’s expense. Now it’s simply another real world iteration of the visual degradation that we must accept as normal and healthy. Every lie that they get you to believe makes you that much more complicit.

I know what you’re thinking; but Adam, I couldn’t give two shits about fashion, modeling, or any event that they hold. What’s it all got to do with me?

Fashion is simply following numerous postmodernist trends to destabilize our culture. The longest running trend has to be that of the art world. Apparently a pineapple was left in a Scottish art gallery by a prankster the other week and visitors mistook it for part of the exhibition. The revealing part of the story for me was how the art world didn’t even bat an eyelid. They have no embarrassment as they have no ethics.

To me, the mark of something having intrinsic worth is if the artist does it for its own sake, for the sheer joy of creating. In other words, if there was no financial reward, would modern artists continue to produce the ‘art’ to which they devote so much time and effort? If something is worth doing in of itself then that is where real creation and imagination flourishes.

The answer with modern art is the exact opposite. Modern artists produce their pieces entirely so they can be ‘discovered’ by the government funded art institutions of the world. And the best way to be discovered is to be as shocking and avant garde as possible. It has nothing to do with talent, ability, or craftsmanship.

Please keep in mind that this process has been going on in the art world for over a hundred years or more. It is now the most advanced of its kind in the world. The fashion industry is only at the beginning of its own degradation by post modernism. So the clothing in the above photo is not completely bereft of any artistic value. There is still some beauty present, however slight.

But not on the models. That is where the ugliness is setting its roots. We shall need to give it time before it spreads to the garments that are on display. But soon, perhaps, designers will attempt to outdo themselves with ugliness in order to catapult to the top of the steaming pile.

If people are surrounded by ugliness then they will inevitably fall victim to being ugly on the inside as well. Our art is ugly, our architecture is ugly, our cars are ugly under the guise of ‘safety’, our furniture is ugly and disposable, our streets are ugly, our workplaces are ugly, our national sports are ugly as they have been smothered under an avalanche of petty regulations and rules; our minds are ugly, dominated as they are by progressive social justice banalities.

Imagining an image of East Germany under the shadow of the Berlin Wall, it springs unbidden as a dark and gloomy ugliness, while the West remains a beacon of light that flickers with hope from the other side. Why then did we voluntarily turn out that light?