You’ve probably heard the one about how you can’t put a frog in hot water, or even tepid water because it immediately recognises the danger, but if you put a frog in cold water and slowly bring it up to the boil then it will boil to death quite happily as it is used to the danger and doesn’t recognise it.

Australians for the most part are the frog in the rapidly boiling pot of water. The boiling water is mass immigration from unsuitable and even hostile cultures, people who have little to no intention of integrating into Australian culture.

Here’s a cool image that I got from Maggie’s Farm. 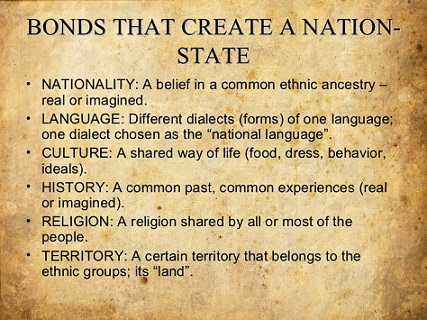 We are in the process in Australia of destroying every one of these bonds. Some of the destruction has been going on for decades. I’ve heard that approximately half of Australia’s landmass is now signed over to aboriginal groups under native title laws. In many of these vast areas non-aboriginals are forbidden to enter without a permit. In other words, this is a division of the Australian nation under territory.

The most common so-called benefit of mass immigration of foreign cultures cited by brain-dead shitlibs is all of the different cuisines that they now get to enjoy. But food as a shared way of life is part of culture, and it is part of what bonds together a successful nation. Here is an interesting article via Peter Grant which examines the steps that the founders of modern Israel took with regards to food:

Early adherents to the Zionist project, committed to creating a Jewish state in the territory now known as Israel, sought to abandon vestiges of their past. Just as the European settlers favoured Hebrew over Yiddish and khakis over frock coats and homburgs, they also purposefully chose to eat indigenous foods over Ashkenazi ones. “Many of the first Ashkenazi Jews who came here, the ideological pioneers, were interested in cutting off their roots from the past and emphasizing the newness of the Zionist project,” explained Shaul Stampfer, professor of Soviet and East European Jewry at the Hebrew University of Jerusalem. “One of the ways of doing that [was] through the food.”

The settlers abandoned their traditional foods in order to construct a national narrative and identity, and it worked because these things are critical to any nation. Australian on the other hand can boast of possibly the most diverse range of cuisines available anywhere in the world, while remaining oblivious to the fact that Australian traditional foods are not just being lost, they are being banned.

I have written recently on why I think Europe is better placed to weather this cultural storm than Australia, and I have also pointed out that Australia’s immigration rate is over twice that of Britain and the USA. Those pieces were cross-posted around the internet and received a lot of disparaging comments from Australians. They do not believe what I am saying because they are sitting in the pot and they do not notice that the water is getting very warm indeed.

I know, I know. You’re rolling your eyes. You don’t believe what I’m saying. Well, if you don’t believe me, how about listening to American comedian Brendan Schaub who recently came to Australia for the first time, via XYZ:

He thinks that Steve Irwin would be rolling over in his grave. I rather think that the servicemen who died defending this country from the Japanese invasion in WWII would be slightly more annoyed.

All of the six bonds listed above that make a nation state are perilously weak in Australia. All of them. The water is getting hot, the frogs are feeling warm and cozy, and the country is racing towards an end-point.

But hey, enjoy those kebabs.

I have broken the law and I’m on the run.