Africans really are that stupid.

Boredom was somewhat of a problem for the riverguides when I lived in Uganda. At the time, tourism was down and we were only getting one or two trips a week. We resorted to many activities to make the days pass, most of which included some sort of assistance from chemical or alcoholic substances, not to mention expat chicks, principally daughters of various foreign dignitaries who had no idea what their precious offspring were up to.

One of our daily minor amusements was reading the local newspapers. We had to let the household staff read them first which was part of the fun. It was instructive to observe how the locals took whatever was written in the local rag as being deadly serious, no matter how ridiculous the actual content. Instructive in the sense that when I returned to the First World I was able to better understand how our own media disseminated the same bullshit.

While the daily news section was somewhat amusing, (among the memorable highlights were the university students who decided to become terrorists and blew themselves up on the way to carry out their heinous deed), the best part of the newspapers were the daily living sections. Supposedly highlights on how to live your life, over 90% of the articles were to do with sex, usually along the lines of how to get rid of, keep, or find out if a partner was cheating.

In doing some homework for this article I decided to fire up some of the Ugandan newspapers to see if anything had changed. These are the headline articles from today’s lifestyle section of the New Vision newspaper:

The lead article is called Should I marry my brother in law?

Further down the list we have such gems as Should I accept her with the pregnancy?, DNA test negative but can’t let go of the kids, Is my father dating my girlfriend?, They rejected my fiance for being a widow, and my personal favorite for today, A movie made me stop trusting my husband.

Almost every article includes a different photo of the same stock pose; a poor man who doesn’t know what the hell to do: 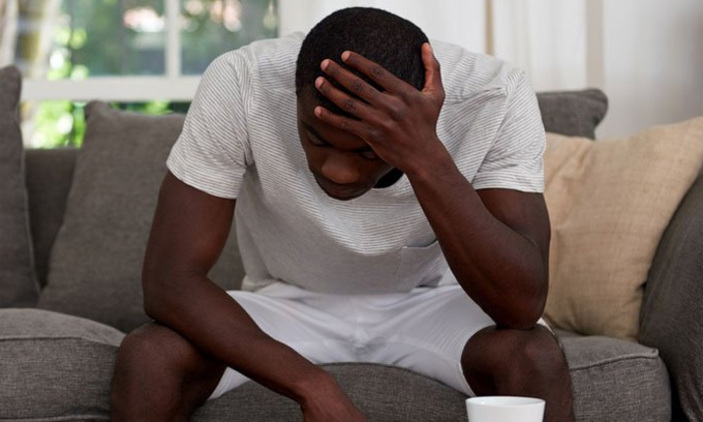 Keep in mind that this newspaper is regarded as the highest quality journalism in Uganda. We’re not talking about their version of The Huffington Post here. But I tell you what, a Ugandan version of that website would be something amazing to behold.

The overriding aspect of Africa for those of us who lived and worked there was the unrelenting stupidity. This was prevalent at all levels; whether it was government ministers or the local villagers that we hired to carry our rafts around impassable waterfalls, they were irredeemably ignorant. I spent close to two years in Uganda and I worked with Ugandans from all social and economic levels, and I can honestly say that in all that time I never met a local who I would consider to have been intelligent.

This level of endemic stupidity only serves to grind you down. This is detailed in my first book where I describe the tragic circumstances of one of my colleagues who lost his ability to screen out the hopelessness and mental poverty that surrounded us on a daily basis. He lost the ability to laugh at the circumstances because he finally was no longer able to screen out how tragic it was. Laughter and mockery were the only things that got us through and unless you have been there you cannot really understand it. It is a gallows humor, but it is humor nonetheless. The darker the moment then the darker the ribaldry that accompanies it.

Vox Day recently brought attention to an incident in Pakistan where a fuel tanker overturned, villagers rushed to gather the spilling fuel with whatever receptacle they had at hand, and then someone lit a cigarette. Well, I personally witnessed this happen on no less than two occasions in Uganda. Overturned fuel tanker on the road on the way out to the river – blackened patch of ruin with smouldering bodies on the journey home, most of them small children.

Or how about the Ugandan kayaker that worked for us who asked for extra money to cure his sick child, and then spent it all on brand new boots which he proudly displayed to us all at work. When asked about the sick little boy he unashamedly told us that he had died but it was all okay because he could make another son, and had we seen his new Caterpillar boots?

Also in today’s edition of New Vision is this story titled, Father of 176 seeks government support:

A 65-year-old man, Mustafa Magambo Mutone, wants the Government to support some of his 176 children. “I have tried to feed my 13 wives and over 170 children and it is not easy.

To put this in perspective, this is an absolutely standard piece. It is unusual only outside the context of Africa.

He explained that he is still strong enough to marry more wives and bear more children, since he does not drink alcohol, smoke or take sugar.

One of the characteristics of rank stupidity is the inability to learn from obvious mistakes. Before you think that this guy must be some sort of drooling ditch-digger, he is in fact in the upper echelons of society.

What do you think are the chances of his numerous offspring learning from their father’s inability to plan for the future or control himself?

“We were groomed by our father to be responsible, have good morals and work hard. The only challenge is the big number of dependants of other wives who have children aged between four and 13 years,’’

Another Ugandan newspaper is The Observer. Today they have a piece up titled, Sex talk: If I were a lioness:

I spent last week in Kidepo Valley national park and left the beautiful Karamoja sub-region convinced, a perfect man does exist, after all.

That is the opening line of the piece. If you want to cure a grammar-Nazi of their affliction just send them to Uganda.

These things matter to some women. A lot. No wonder Bulbul is polygamous. So, there; each to their own. Cough-cough.

Read the rest of it if you don’t mind losing a few brain cells in the process, proudly written by the human resources director of The Observer Media Ltd.

Courtesy of The Z Man, yesterday I discovered this video of a researcher who went to Africa to find out once and for all if the average African IQ is around 70, which would be considered retarded in the West. He tested university students in Johannesburg, supposedly the cream of the crop, and they came in at 86.

There were a lot of lefty progressive expats in Uganda when I was there, mostly in the NGO community. But not one of them ever went to a Ugandan doctor. Idealistic notions of equality are all when and good when it’s not your own health on the line.

Africa will always be a gigantic steaming pile of refuse because Africans are stupid. There is no getting away from that fact, and a fact it most certainly is. Aid to Africa is simply welfare on an international scale, and like all welfare it absolves people of having to take responsibility for their actions. A man with almost 180 children who wants even more is indicative of the looming humanitarian disaster that will sweep over that dark continent in the very near future. Our priority should be to make sure that it doesn’t consume us in the process.

A lesson on not apologising from Clementine Ford.