Continuing on the theme of last week’s post where I wrote about the ludicrous aboriginal industry, let us examine another example of people participating in this wholesome activity – it’s fun for the whole family!

I do this not so much to name and shame but more to point out the ubiquitous nature of this deceit. It is not hard to find examples of this nature; in fact it is astoundingly simple. I don’t even go in search for them myself. I have simply ‘liked’ a few pages on Facebook that specialize in crowing the wonderful success of aboriginals and how brilliant the entire edifice is working, and all without a shred of self-awareness. They pop up on my feed with a depressing regularity.

When seeking to recognize these potential fraudsters it helps to follow these general points:

So with that all in mind, step forward this week’s winner on the aboriginal industry gravy train, Dwayne Simpson! 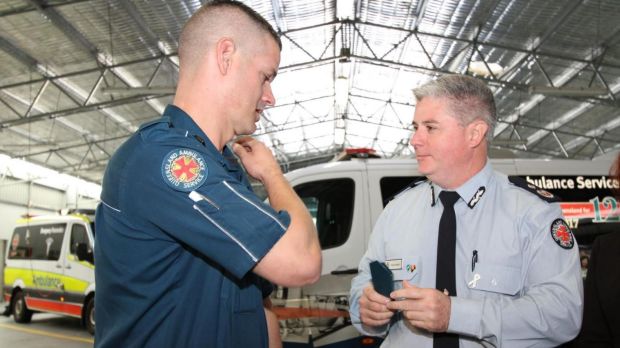 that’s Dwayne on the left, in case you had trouble spotting the aboriginal guy …

Perhaps my dear readers thought that last week’s red haired, pale white skinned, and freckle faced example was a simple abomination, (in more ways than one.) No no no mon petit cheri. There’s Dwayne, who according to The Brisbane Times is a proud member of the Gamilaraay people. So what possible motivation could have induced dear old Dwayne to claim membership of this clan that perches near Grafton in New South Wales, (although Dwayne doesn’t hang out down there – he’s up in Ipswich which is a fair hike away.)

Dwayne Simpson’s Indigenous background as a Gamilaraay man is the reason why he has joined of (sic) a new crop of ambulance paramedics in south-east Queensland.

I bet it is. Let’s see; could this have enabled him to, oh I don’t know, jump a queue?

Queensland began a program to employ Indigenous paramedics in 2013 to bridge the gap between Indigenous and non-Indigenous Queenslanders.

Twenty-four others are studying their way through four-year programs.

Mr Simpson is the first of three Indigenous paramedics to be trained in south-east Queensland.

So the program began almost five years ago, but according to the article Dwayne is just a year into his paramedic studies. I know a few people who have changed careers and joined paramedic courses around the country. Getting in can be a bit of a challenge as can staying the distance seeing as they do their best to weed out those that won’t cut it. Unless they have a vested interest in keeping them, such as, oh I don’t know, an indigenous paramedic program?

But let’s see if our hero this week can carry it off with the necessary aplomb.

He said his Indigenous background is very important but “not always helpful”.

“At times it can be (helpful) … Not always,” he said with a gentle laugh.

Scroll back up and take another look at the photo and then come down and read that bit again. In what possible way can his so-called aboriginal background not be helpful? I mean, he’s hardly likely to walk down the street and be called an abo, is he. Perhaps it’s more like when he’s at a party, and sitting around having a laugh with everyone, and then someone recites an aboriginal joke, and then he gets the great sadness. Could that possibly be it?

The Indigenous link is important to him and part of the reason for his change of emphasis in helping people.

“My people were stolen people. So part of me looks back on that and how we were treated,” he said.

“So it does have significance to me to see how far we have come.”

Another bonus play of this week’s example is the other fellow in the photo, Acting Commissioner Craig Emery. You know, the one giving him the ribbon in front of the assembled media. How the fat fuck is able to do this and keep a straight face is another depressing aspect of this racket. People at all levels act the part of buying into this massive fraud because to do otherwise is career suicide, and if you’ve grimly done your best over the last few decades to climb the greasy totem poll until you’ve reached the giddy heights of Acting Commissioner in the Queensland paramedics, then you’re sure as hell not going to throw it all away by turning around and making the eminently simple observation that this guy looks about as aboriginal as Paul Hogan. We can’t expect people to have courage or personal integrity, now can we.

Anyway, this one ticks all the boxes. I have no doubt that Dwayne got the elders of the Gamilaraay people to give him the seal of approval as to his inclusion into the tribe. But whether or not this process was all above board I’ll leave that up to the sparks flying around the communal bonfire to decide.

Remember, this guy is being promoted as a shining example of the Queensland paramedic service filling a quota for aboriginals to be in their ranks. This is hypocrisy of the first order, and in the racket brigade he ticks all of the boxes. Don’t blame me; I’m just the one shouting that the emperor has no clothes, or boomerang if you like.

Representatives of the people?