I saw the term ‘diversity points’ on a comment at Vox Day’s blog. It’s my new number one fave term and I will be using it as much and as often as I can. I’m not just talking about here on the blog. I’m going to be injecting it into as many seemingly ordinary conversations as possible.

The thread in question concerns a recent blowup between members of the alt-right and English historian Mary Beard about the tricky subject of diversity in Roman era Britain. (Hint – there wasn’t any). It seems that over the last year the history has literally been turned upside down with Britain being populated by hordes of blacks posing as Roman legionnaires. The BBC has of course been pushing this line on the childrens. 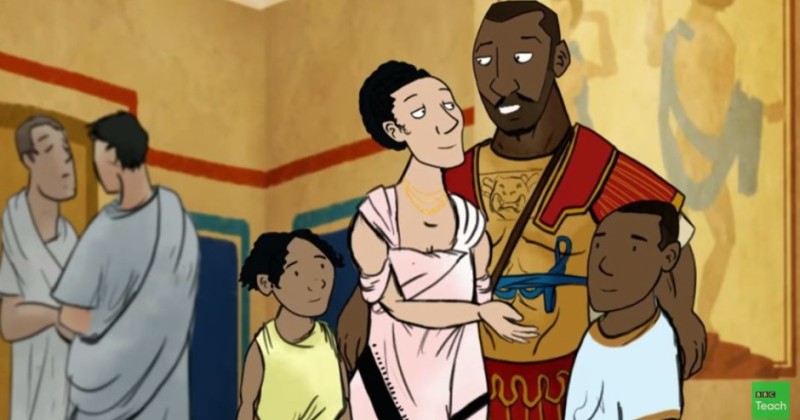 Things got turned up to DP 11, (Diversity Point war rating), when very smart dude Nassim Nicholas Taleb got involved. He posed the following question to Beard: “Where did the diversity genes evaporate?” Or in other words, where did all these supposedly black Englishmen go?

Reading all of the passages I felt a faint stirring in the subliminal reaches of my brain, an ugly brewing of memories deliberately suppressed, only now to be awakened. It turns out that Mary Beard also presents a documentary series on Ancient Rome and I had been unfortunate enough to catch one of her episodes in the past.

All I can say about Beard is, don’t these people go to dentists?

Her great putdown to Taleb? How many history books on Roman Britain have you read? Because when you want to refute an idiot historian what you really need is a bunch of other books written by idiot historians.

Funnily enough, Taleb wrote a piece on just this topic back in April. So let’s use this to segue into the meat of the links and stuff.

Remember that historians are selected among people who derive their knowledge from books, not real life and business. Likewise for State Department employees since these are not hired among traders but students of these historians.

Be careful what you say around shitlibs like Lena Dunham. Big fat ugly sister is listening.

What sort of Stalinist impulse leads to this snitch culture, with self-appointed commissars acting as informers against those suspected of deviation from correct thought? Who does Lena Dunham think she’s “helping” by trying to get a couple of otherwise anonymous airline employees fired for the crime of having a private conversation near the Hudson News stand at JFK airport?

They have no internal filter. They can never stop. Nothing is ever enough. They are insane.

Roissy digs up a bunch of scientific papers from the 80s, (back when men were men, and women were real women, and science was real fucking science), which go to prove that the manosphere is right. Like durr – we knew that anyway.

I read through the study to see if the authors properly defined what they meant by “dominance”. Luckily, they have: the term as they use it means PSYCHOSOCIAL DOMINANCE, aka GAME, and all that entails, including alpha and beta male body language and conversational nuances.

I hate Hollywood. I despise their films with all of their inherent diversity points. That is unless the film is a remake of Death Wish, starring Bruce Willis, directed by Eli Roth, and set in the hellhole of modern day Chicago.

Long form link for this week, the fascinating case of the hijacking of an oil tanker by what appears to be its owner. Lots of diversity points here, (but not in a good way as far as shitlibs are concerned), and I have no doubt that when it all concludes it will be made into a shit movie by Hollywood.

Hey, it’s 2011 and you’re sailing through the most dangerous waters in the world at the height of the Somali pirate infestation. Would you turn the engines to warp speed and make like the three shepherds and get the flock outta there? Or would you …

On the evening of July 5, Gonzaga ordered the crew to cut the engine and drift while they awaited the guards’ arrival the next morning. They were 12 nautical miles off the Yemeni coast. It was calm, partly cloudy, and silent, apart from the hum of generators and the sloshing of breakers.

An excellent look at the life cycle of clothing companies. Kinda depressing if you have some favorite brands and you’re watching them go down the shitter. Hello, Paul Smith! Waving at you! The rot begins when they enter the “New Markets” stage.

The company is often under new management, typically with MBA and logistics-centric credentials. The company increases focuses on greatly improving contribution margins.

The new management begins to purge many of the old employees and suppliers/branded vendors that had contributed to the success of the company.

Companies in this stage are very interested in new categories of customers, and take the existing customer base for granted; many loyal customers find themselves buying less and less.

Kewl tunes for the week. From the 90s again, and one of the very best trip-hop tracks of all time. You probably know it but if you don’t then enjoy.

Did you scroll past everything I wrote and skipped straight to this bit? Really? Really?

I’m proud of you.

No diversity points here. As it shall always be.

The false dawn of the Australian Conservatives

How to break up with someone – part two.