How to get fired from Google.

There’s a book titled  Are you smart enough to work at Google? which is simply a bunch of trick questions and puzzles that Google itself doesn’t use in its interviews and hasn’t done so for years. I read some of the book in a foreign airline lounge a few years ago because it was just about the only thing on offer, and my impression was that if it were an accurate representation of Google then there is no way that I’d want to work for such a bunch of supercilious wankers.

The events of the last few days seem to have borne out the charge that not only are they a bunch of wankers but that the company has been completely converged by SJW leeches and lunatics. Last week an internal memo at Google got out into the mainstream. It was written by software engineer James Damore who this morning was unceremoniously fired.

Let’s get one thing straight: Damore is no conservative. He is an SJW himself, (which is why I am fairly flabbergasted that Gab and Wikileaks immediately offered him a position.) Here is the very first line from his 10 page memo:

I value diversity and inclusion, am not denying that sexism exists, and don’t endorse using stereotypes.

Damore was a good SJW like all of them. His mistake was questioning the narrative in what he assumed was a helpful manner. He did so because he was worried at where Google is heading, which is down the gurgler based on the machinations of its leadership and employees over the last few days.

Their big problem was not just that an employee had questioned the SJW narrative. It was that almost a third of Google employees agreed with him. 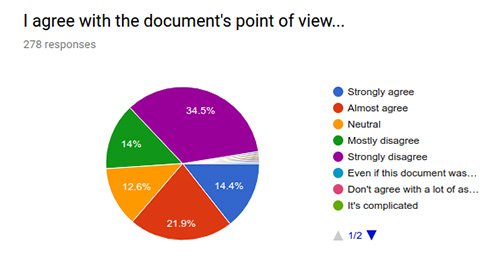 The very public breakdown of this sorry saga has been extremely revealing of the fragility of the SJW narrative. Google’s CEO made this statement only a couple of days ago:

First, let me say that we strongly support the right of Googlers to express themselves, and much of what was in that memo is fair to debate, regardless of whether a vast majority of Googlers disagree with it. However, portions of the memo violate our Code of Conduct and cross the line by advancing harmful gender stereotypes in our workplace …

The memo has clearly impacted our co-workers, some of whom are hurting and feel judged based on their gender. Our co-workers shouldn’t have to worry that each time they open their mouths to speak in a meeting, they have to prove that they are not like the memo states, being “agreeable” rather than “assertive,” showing a “lower stress tolerance,” or being “neurotic.”

Of course, the feelings of James Damore and his job security, which one would argue might be more important than vague and nebulous accusations of causing hurt, are not worthy of consideration. Indeed, it was Damore who opened his mouth and who thus had cause to worry. It seems that based on the company’s actions, only certain “Googlers” have a right to express themselves. Some expressions are more strongly supported than others, (which are not strongly supported at all).

I wonder if the legions of frothing-at-the-mouth employees objecting to the memo were valuable software engineers working on the only part of Google’s business that makes the company money, or gullible morons whose best contributions are coming up with which historical nobody’s 174th birthday can we celebrate on the homepage today.

The SJW’s at Google are of course doubling down in their frenzied attempts to quell all hatespeak and badthink at their company, (their company remember). Engineer Thomas Bushnell has committed to devoting entire interviews to really important stuff which has nothing to do with someone’s ability to write code.

From now on, I’m going to devote at least the first third of my 45 minute interview time to a discussion of experience with diversity. If the first fifteen minutes doesn’t satisfy me, I’ll continue the discussion. If need be, it will take the forty-five minutes.

I would encourage others to do the same. Judging “googliness” by a vague gestalt with no deliberate attention to such things is inadequate. We need to consciously ask and it make it clear that this is part of what we care about.

By the way, a very easy way to identify thought-conforming SJWs arseholes is to see whether or not they enthusiastically adopt stupid, humiliating, and individualistic-destroying monikers such as “Googlers” and “Googliness”. Keep in mind that the point of Damore’s memo was that people should be treated as individuals and not as dancing puppets of minority groups. Yet he works for a company that labels all its employees as Googlers. Less individualistic than this would be difficult to find.

The ironic thing is that Google does not practice what it supposedly preaches with the overwhelming majority of its employees being white or Asian, and male. But that’s the whole point. If you can’t actually adopt diversity for real because your competitive business model won’t allow for it, then you need to be seen to be adopting it, and the best way to do that is to proclaim it loudly to the heavens for all to hear and rejoice over.

Whether or not this signals the beginning of an implosion at Google and its eventual collapse I do not know, but we can at least agree that the signs for its continued existence in its present form are not healthy. Google has only been around since 1998, so a young engineer straight out of college who started with them would be in his early forties now. If anything this merely reinforces that the days of a job for life are over unless you’re prepared to become a full SJW, and even in that case your job will end up disappearing as the company diversifies its way out of existence.

At this point in time getting fired from Google in this manner is probably the smartest move in the book. And with that in mind perhaps Damore is not an SJW at all. The lawyers must be salivating at the thought of landing his case. This could turn out to be the biggest payday in the history of Silicon Valley.

Global warming made my cat hate me.