You want to vote for gay marriage? What are you, crazy?

Apparently a “popular Youtube lesbian personality” is in a spot of bother with certain members of the LGBT brigade for daring to suggest that she prefers the female anatomy when she’s out doing a spot of rug munching. The reason that she’s in trouble? Such a viewpoint is now considered “transphobic”.

Being transgender puts you at the apex of the SJW Hierarchy of Victimhood, and calling yourself a “queer, trans, nonbinary lesbian” means women are obligated to have sex with you because social justice.

They hate this lesbian for saying that she prefers girls, real girls that is, not self-mutilated men pretending to be girls. Trannies are mentally ill. Let me repeat that; mentally ill. Instead of attempting to deal with their mental condition they prefer to impose it upon the rest of us in an attempt to normalize their own insane behavior. Thus we have the example where a lesbian preferring real girls is described as being the sick one.

Transsexuals and their insane demands now seem to be par for the course, but it was just a couple of years ago that this sort of thing first started getting traction. I remember reading about trannies protesting in London for what they were calling “trans’ rights” or some other such nonsense. As soon as I saw that I thought that this was going to go one of two ways: either they’d be stomped on by the authorities and made to crawl back into their putrid dens of insanity, or else they would be placated which would result in an inevitable acceleration of their lunacy.

Well it came and now it’s beginning to run its course. I feel that the public stamina for all things faggotry is beginning to dry up faster than a gay orgy night where they run out of KY. Which is why the looming gay marriage postal plebiscite in Australia is causing the gay community and lefties in general to lose their shit. They’re a year or so too late. If they’d had the vote back in 2015 I reckon that they’d have got it through. But we’ve had time since then to see many aspects of uncontrolled LGBT activism, such as the Safe Schools program, and many people have woken up to the fact that all of this is simply an excuse to normalize deviancy.

No group better exemplifies this than the trannies. It takes a special kind of crazy to mutilate yourself and then run around attacking people for stating that having a penis makes you a man. As soon as they can get you to start repeating their obvious lies and deceptions as truth then you become part of their collective insanity. It is exactly the same tactics that the Soviets used against their own people.

Like I said, they’re ramping up the volume now because they’re out to get as much as they can while public opinion is still nominally with them. In that regard, their biggest enemies are their own supposed allies in the LGBT brigade because they’re all competing for the same resources which are now in danger of disappearing.

Some of my conservative friends might say, “Who cares? Let the LGBT coalition destroy itself in a circular firing squad. Serves ’em right!” The problem with that reaction is that once the SJW mobs destroy Arielle Scarcelli for being “transphobic,” they’re not going to stop there. No, next they’re going to find another target, and then another and another and another.

I have to disagree with Robert McCain here. I think that the LGBT crowd should not only be encouraged to eat their own, (in a figurative sense mind you), but we should whip them up into such a firestorm of self-hatred that when they turn on one another publicly it will put them back over 50 years in the general public opinion. Such a spectacle would be a fair reward for having to put up with thirty years worth of gay mardi gras parades, middle aged fag hags, and the two faggots on Modern Family.

In the run up to the Australian postal vote, conservative groups and commentators are encouraging those on the side of traditional marriage to put forth their views in a clam and rational manner while upholding all the time a sense of decency and fair play.

I say stuff that loser approach. Nobody likes a bunch of losers, and nobody will vote for creatures of ridicule. Our goal should be to ridicule the LGBT lobby and their perverted sense of morals and reality at every opportunity. You want to vote to normalize relationships that say that having a penis doesn’t make you a man? What are you, crazy?

Now that I think about it, that could be a good line to run against them.

You want to vote for gay marriage? What are you, crazy? 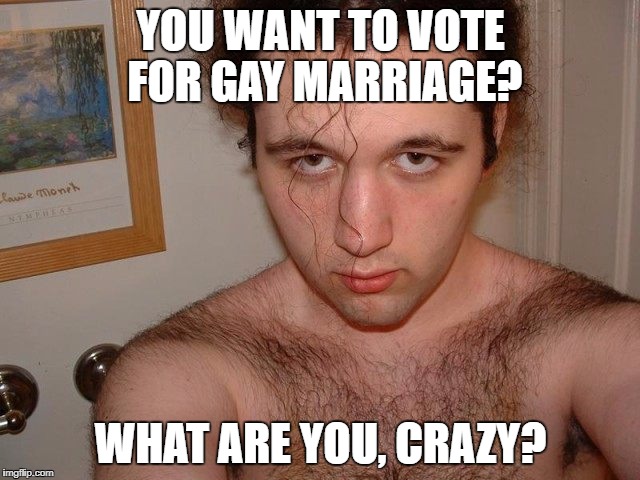