The far-left want a war, but not a fair one.

By now most of you know that there was a little kerfuffle in Charlottesville yesterday. You can read about it in the mainstream media which will be mostly fake and ignorant, (I saw the ABC describe Antifa thugs as ‘peaceful counter-demonstrators’), or you can read Matt Forney’s article on the subject.

Charlottesville was chosen as the location for the rally due to the machinations of its far-left city hall and their determination to remove a statue of Civil War Confederate general Robert E. Lee from a park that is named after the same man. Needless to say, the far-left were out in force, and by all accounts were aided and abetted by the local police. Which is all well and good until a guy in the middle of the mob panicked and drove his car through a crowd, killing one person and injuring dozens more, (all Antifa members by all accounts), and then a police helicopter crashed killing two police on board.

Things have a tendency to get out of hand where mobs are concerned. I learned this while living in Africa. Stay away from crowds.

Saying that, the young men of the alt-right were well within their rights to hold a peaceful protest, the legality of which had been authorised by a local court after the city had cancelled their planned gathering. It was a given that the far-left were going to show up in force because their existence depends on conflict with whatever enemy they are currently aligned against. It is a negative group identity which The Z Man wrote about the other day.

Blackness in America is a laundry list of grievances against whites and a list of things that blacks reject about society. It has little to say about what it means to be black, independent of whites. Much like the contours of a black hole, we can only know black identity by knowing the surrounding white identity. Wherever white culture ends, that’s where black identity begins. In America, being black means not being white.

The same analogy can be used for the far-left and all of its individual factions. In the 1960s counter-culture the left were rebelling against “the man” and “squares”. Today they have no real enemies so they’ve had to invent them. Things like “misogyny” and “white male privilege” and an endless list of other meaningless totems. In addition to this, anyone who publicly stands against their insane posturings is “literally Hitler” which the more you consider it the more stupid it becomes.

Understand that the types of people that inhabit the far-left have no real lives of their own. Their identity is bound with the collective group. The end of the group would be the death of their identity. They always have to exist in opposition to something.

But as The Z Man notes, the left hasn’t really had a coherent opposition for over 50 years. Which is why the emergence of a genuine opposition in the alt-right has the far-left simultaneously losing their minds and wetting themselves at this external validation. Conservatives over that same time period have used the potential violence of the far-left as a handy get-out-of-actually-doing-something clause on their own part. I have no doubt that over the next week we will see ponderous and boring monologues from these same old fools as they denounce the actions of the alt-right under the banner of, “See? We told you what would happen if you stood up for what you believe in.”

As I noted last year, the far-left are able to cause so much trouble because they have loads of free time on their hands courtesy of the welfare industry. But that welfare is not restricted to governments. Private individuals such as Soros use their money to fund troublemakers. And this week we have seen that large companies such as Google are effectively welfare agencies for members of the far-left. 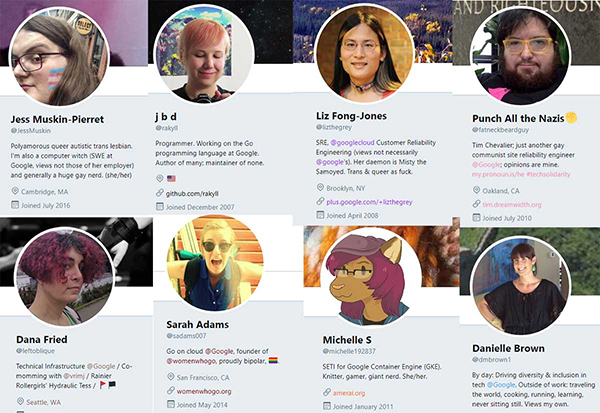 To be able to simultaneously hold a corporate engineering position and have an official Linkedin name as “Punch all the Nazis” signifies in itself that Google is a welfare job program for far-left ideologues, let alone the fact that they sacked one of their other engineers this week for daring to suggest that men and women might be different. All animals are equal but some are more equal than others.

Australia is no different in this regard. Qantas wrapped itself in a rainbow colored shroud this week as the company officially advocates for same sex marriage. While I have no doubt that any Qantas employee that flies the rainbow flag on their private social media accounts will have the company’s full support, it will be a brave pilot or trolly dolly who publicly advocates a contrary message. Expect that sort of stand to be dealt with under the guise of ‘not protecting hate speech’ or ‘causing colleagues to feel uncomfortable’.

Now the far-left have moved towards actual violence, a step that many of us on the alt-right have been predicting for some time. That is not a boast. It wasn’t a difficult prediction; anyone could have made it if they had bothered to open their eyes. The fact that the far-left have turned violent while simultaneously decrying the alt-right for their “potential violence” is ironic but not amusing. Their projections were clear to see as I have already stated.

Antifa is a literal joke and they wouldn’t last a second against the type of men that inhabit the alt-right. But what we saw in Charlottesville was a continuation of the state-sponsored legitimacy that far-left groups like Antifa have been enjoying. Yes, the far-left want a war, but do not be deceived into thinking that they want a fair fight. The last time they got that was in 1936 and things didn’t go exactly as they planned. I have seen many men on the alt-right commenting that the military and the police are in support of our side. Well, events yesterday proved otherwise as far as I can tell.

I am proud of the young men of the alt-right who put their bodies on the line in Charlottesville. But we need to remember that this is a fight that has to be fought with more brains than brawn. The local police will undoubtedly charge the driver of the car with murder two or something similar in an attempt to cover up their own failure to control events. And right at this moment the major news networks will be putting their spin on the story so that the far-left will come out looking like sweet little angels.

We know all that. The young thugs in Antifa are really just playing a game. Up until this point there have been no consequences for their weekend hobby of make-believe revolution. They will continue to push the envelope until things get really real and then it will be all wide eyed innocence and mock confusion at the results of their actions. The far-left fear no consequence for their actions. They literally have to attack someone with a tire iron and then have the bad luck to be successfully identified by their opponents on the internet for something to happen, and even then the police had to be dragged in to do something kicking and screaming.

That is the real potential weak point of the far-left; the lack of consequences. That photo of Google employees is exhibit one for the defense. They have nothing to fear and they have spent 50 years stacking the deck while conservatives let them. It is not a fair fight and they will continue to make it as unfair as possible. Until we can turn that around then events like Charlottesville will only play into their hands.

Richard Spencer is not a leader.