The art of drinking at quota.

Skiing in the Alps for me is a prelude to the real joy of being high in the Italian mountains; eating marvelous food and drinking alcohol well before the clock has even got around to thinking about striking noon. The last week progressed roughly the same way every day. The good wife and I would stir in our bed around the time that our ski instructor neighbor had stomped down the stairs in his heavy boots to go to work. We were staying in the disused apartment of a friend who had kindly loaned it to us for the duration of our sojourn.

The apartment was marvelous. A huge vaulted ceiling in the main room as well as one of those nifty Tyrolean wood burning stoves made out of ceramic and stone; the type that have convoluted passages inside which the warm air is forced to slowly traverse. A fire lit in one of these babies will keep the place warm for a good eight hours. Lighting the fire was one of the first things that I did upon stumbling from the bed whilst scratching myself in unappealing places.

It’d take us a couple of hours to coffee up and drive up to the ski lift where we’d pick up the wife’s skis and my snowboard from a friend who runs a little hire shop, and then up the lift we would go. Joining us would be scores of skiers who had already been up for hours, the type who are desperate to cram in as much ski time as they possibly can so as to get their monies worth.

Skiing is nothing if not combined with the hearty consumption of food and drink. The skiing is the excuse that enables you to spend an exorbitant amount of money to travel up a mountain and dine at the top of the world. I say dine, but plenty of days it was nothing but a simple piece of bread piled high with sausage and sauerkraut. That and an enormous mug of frosty beer on the side.

When you’re sitting outside on a terrace and its a few degrees below zero, your beer glass never gets warm. On the contrary, sometimes you have to be careful that it doesn’t freeze and break apart. There is nothing quite like drinking up at quota. For a start, drinking and skiing is still perfectly legal. There are no police roaming the slopes waiting to stick an obtrusive breathalyser in your gob. And to be fair, even completely cut with several beers, a bottle of wine, and grappa under my belt, I still ski better than the majority of venal Poles and Russians that infest the slopes. Say what you want about the Soviet Union, but at least they kept all of these boors safely locked away from the rest of civilization.

What is it about Polish women and plastic faces? Even the young girls appear to have had their faces carved out of the leftover bits at the mannikin factory. I’m not talking about plastic surgery here, although I’m sure that there is plenty of that. But Polish women just seem to have had the skin on their faces stretched over their skull but the tradesman had underestimated the amount required. If one of them ever cracked a smile it would probably break her face.

Drinking on top of a mountain in a refuge with hearty food to sustain your continued alcohol consumption is the epitome of the civilized world. There simply is nothing quite like it. The highlight of our trip, and the highlight of our alcohol intake, was lunch at the small private restaurant at the splendid Chalet Fiat in Madonna di Campiglio. Most of the structure is a gigantic food hall – don’t get me wrong; it’s about as hoighty toighty as it gets outside of certain Swiss economic conference fleshpots. But the restaurant, which is brand new for this season, is on another level. Fine dining at the top of the mountain with one of the best views on a ski slope that you’ll ever see. 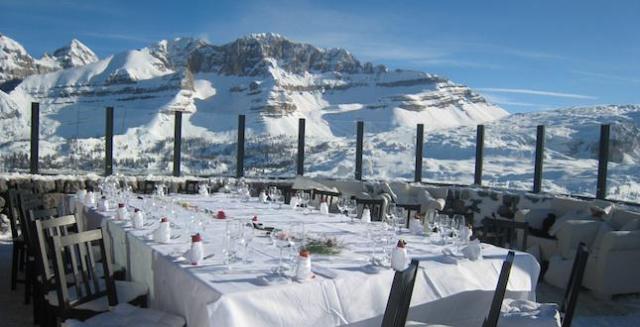 There are only a handful of tables in the restaurant which is presided over by the commanding presence of Dante, maitre d’ to the mountains. The first time we tried to get in we were ushered out so as to not disturb the favored few. But in the process I did manage to book a table for later in the week. The date arrived and we presented ourselves in all our skiing finery. Dante had reserved us the best table right by the window. This was a mixed blessing, as the view was spectacular but the sun on the enormous volume of glass made it a trifle uncomfortable.

I was seated facing the door, which is how any man wants to present himself; you need to be able to see trouble coming. I didn’t see any trouble but I did have the pleasure of seeing multitudes of eager diners being turned away. There is nothing quite like possessing something that so many others want, if only for a few hours. The highlight of this embarrassing spectacle was a group of Russians who stated that they only wished to eat for 30 minutes.

“We don’t do 30 minutes,” said Dante with great imperiousness, and he turned back to us to offer some truffle shavings over my foie gras. The faces of the women would have frozen if they didn’t already possess that plastic countenance to begin with.

We took a glass each of spumante when we arrived, shared a wonderful bottle of Franz Haas pinot noir, had digestives and grappa with our coffee, and then took a large cleansing ale to wash the whole lot down. Outside in the cold air I strapped on my board, took a deep breath, and promptly slid on my face down the steep slope. Once I got myself in order it was exhilarating to discover just how much better one can ski whilst being rather drunk.

Back in the apartment and time to relight the stube. A few sticks of kindling and some choicer pieces of wood and it was away. The trick is to keep the little door open until the fire dies down to red coals; only then can you shut it. Once that’s done then you have 8 hours to kill before it’s time to light the bastard again. Which means a perusal of the finer eating spots in the valley. A pizza with Tyrolean sausage and lard so fresh and soft that it melts in your mouth?  Sign me up, buddy!

And don’t forget to bring another large stein of that wonderful unfiltered beer that you’ve got on tap. Heaven. I won’t have too many though; need my wits about me tomorrow when I hit those slopes and start drinking again.

You hit back hard the very first time or never at all.