For all of you dim foreigners, today is Australia Day. On the 26th day of January 1788, Captain Arthur Phillip and the First Fleet managed to leave their initial choice of Botany Bay, which might have been nice for bird watching but was a glorified shithole as regards to founding a colony, and beat up the coast against a very nasty breeze where they finally put in to Sydney Cove. It wasn’t just a close run thing as regards the weather; a couple of French naval vessels were skulking around and Phillip had to make sure that they got there first, which they did, but only just.

This was also a big day for the local aboriginal population. They were delivered from the awful hunger and grim reality of living in a literal Stone Age and got slapped with the beginning of the Industrial Revolution. As I write these words a bunch of their descendents and commie whites are protesting around Australia at the horrible fate of being given the curse of modern dentistry. I assume that when it all winds up they’ll go back to their homes with indoor plumbing and electricity as opposed to scrabbling in the dust for a twig to light a fire to cook a bunch of flies for dinner. Not to mention a nice cold beer.

Australia is a nation in so much as it has stable borders that it can control and defend and its people are beholden to the idea that their nation exists for a good reason. The first is true in name only; yes we’re surrounded by a bunch of great big oceans but these things called airliners bring in a quarter of a million immigrants a year, mostly from India and China. The second is true up until the point where the continual stream of arrivals outnumbers the locals. We’re not far off that point.

The following links haven’t got anything to do with Australia Day, I’m not that organised. But they will get your brain cells turning if you still have any left after drinking loads of beer in solidarity with us.

Of Crudeness and Truth.

So, when it comes to the Great Shithole Controversy of 2018, my feeling is: I do not care, not even a little. I’m sorry that it takes someone like Trump to break the spell of silence the Left is forever weaving around us. I wish a man like Ronald Reagan would come along and accomplish the same thing with more wit and grace. But that was another culture. History deals the cards it deals; we just play them. Trump is what we’ve got.

There has emerged a war on masculinity.  Why?  Because masculine men are harder to control under tyrannical socialism.  The modern beta male, on the other hand, craves socialism.  This is why the left has branded masculinity as toxic: it stands as a roadblock to their endgame.

Leftists blame, of all things, masculinity for the recent spate of sexual harassment scandals.  For eons, masculinity has been considered a natural and even required trait of being male, but it is now apparently the reason for deviancy.  Who knew?

It’s a good article but somehow I think it misses the broader point – the left just hate everything.

We must keep in mind that (a) the Women’s March originated as a protest against President Trump’s inauguration, (b) Vancouver is in Canada, and therefore (c) WTF are they protesting about? Nobody expects logic from Canadians, of course, and if their “inclusive definition” can include “Hailey Heartless” as a feminist, protesting an American election in Vancouver is small change in their oxymoronic calculations.

You think it’s weird that Canadians are protesting the Trump election? There were women’s marches across Australia for gawd’s sake. Let that sink in. Thankfully we Aussies know how to deal with this shit. 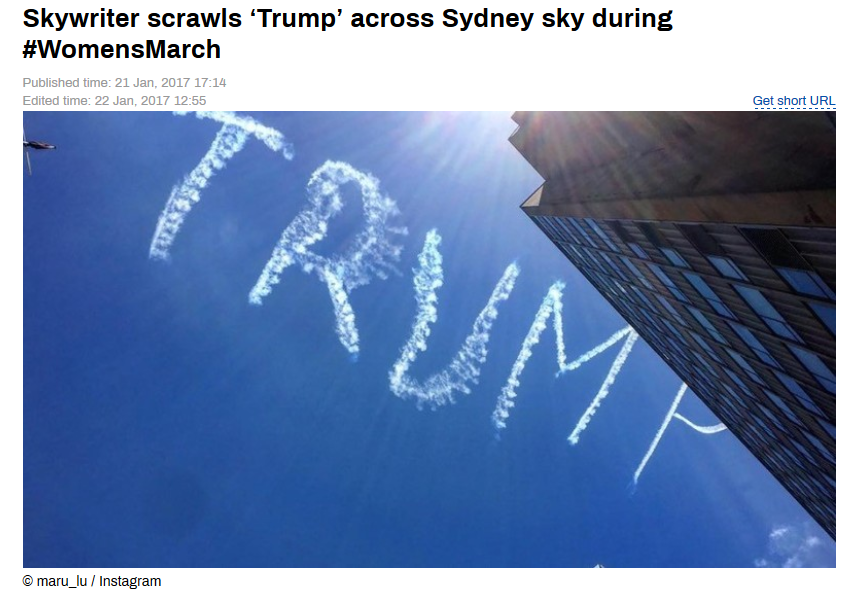 So some Millennial ditzy broad had a hawt date with some beta male pseudo celebrity and had next day regrets which she then proceeded to tell the entire world.

So instead of being a spoiled-rotten Daddy’s girl attending a $68,128-a-year elite school, she’s the ambitious small-town striver who worked her way through a trade school with a variety of jobs. And while I don’t wish to derogate her looks, she’s not magazine-cover beautiful.

There’s a photo if you dare. Would not bang.

Rollo had a sweet take on it all:

The Ansari incident has a lot of Red Pill lessons to teach. First and foremost is the fact that Ansari is a consumate Beta. Looking at the guy he resembles any number of Indian computer programmers frustrated by a want for the secret formula to make a gorgeous American blonde with big tits fall in love with him. Don’t get me wrong, I counsel these men personally, but he fits that schema. Next, Ansari is a vocal and outspoken White Knight for feminism and regularly proves his male self-loathing as part of his standup act. I mean, the guy wears a Time’s Up pin. But like most male feminists, he gets hung by his own Beta Game bullshit – this is the fate of all male feminists.

But then in the midst of all this Aaron Clarey has re-embraced MGTOW!

This means, much as I may disagree with the modern day cultists of MGTOW, their cynicism has a point and their jadedness serves a purpose today. In today’s environment men cannot simply be men, hitting on girls, getting shot down, occasionally not, getting drunk, and scoring through some miracle of god as they have time-immemorial. The risks are just too high.

I disagree – the greater the risk the more the bold and determined man strides forward. Lotsa opportunities out there, my friends. Just keep ya wits about ya and ya game plan razor sharp.

One for the nerds – How an illegal shipping economy changed the world economy.

The first cargo ship with McLean containers set off in 1956 from the New Jersey port in Texas. The complete loading of the ship took 8 hours. An extremely short time in comparison with several days needed for the traditional method, and it was reduced shortly afterward by implementing better cranes and parallel unloading and loading of the ships at the same time. But Mclean was only interested in one figure: the cost of transporting one tonne of wares. In 1956, the cost was around $5.83. McLean’s ship Ideal-X managed to do the same for 15.8 cents per tonne.

This is how McLean overcame the first regulatory barrier constraining his containers from controlling the world. By far, this was not the last one. In the introduction, I mention the loaders and unloaders in the docks. These were the workers having one of the most dangerous occupations and generally passed it through generations. In many cities, these workers were having a distinctive social position, and, for example in New York, not just anyone could reload a truck. This job was exclusively for the members of a so-called group of “Public Loaders.”

Every generation has its Ubers. They win in the end and then the same people who fought against them tooth and nail take them for granted. Like shipping containers.

No one cares if you go home safe at the end of your shift.

But it’s all I ever hear from the cops. If you and your five girlfriends in body armor, with rifles, are that terrified of actually risking your life for the theoretically dangerous job you volunteered for and can quit any time, then please do quit.

You can get a job doing pest control and go home safe every night.

Until a bunch of fucking pussies with big tattoos, small dicks, body armor and guns blow you away for minding your own business.

Because what you’re telling me with that statement is, your only concern is cashing a check. That’s fine. But if that’s your concern, don’t pretend you’re serving the public. If you wanted to help people at risk of life, you would be a firefighter, running into buildings, dragging people out, getting scorched regularly.

Fuck yeah. And I have very good mates who are cops. But fuck yeah.

Swiss town denies passport to Dutch vegan because she is annoying.

A Dutch vegan who applied for a Swiss passport has had her application rejected because the locals found her too annoying.

Nancy Holten, 42, moved to Switzerland from the Netherlands when she was eight years old and now has children who are Swiss nationals.

However, when she tried to get a Swiss passport for herself, residents of Gipf-Oberfrick in the canton of Aargau rejected her application …

Tanja Suter, the president of the local Swiss People’s Party, claimed Ms Holten has a “big mouth” and that residents did not want to grant her citizenship “if she annoys us and doesn’t respect our traditions”.

You hit back hard the very first time or never at all.