The Sudanese belong in Sudan. 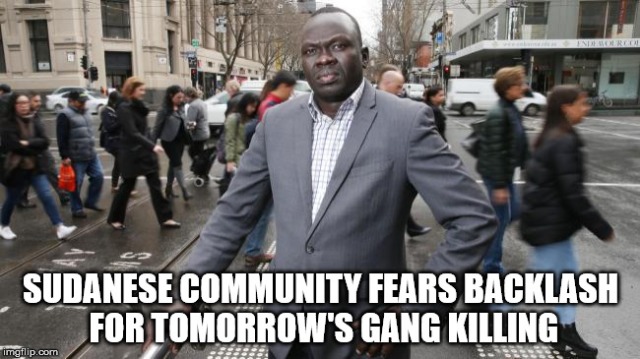 Melbourne’s diversity inspired Sudanese crime wave continues unabated, but now we learn that the fault for the vicious crimes being perpetrated by scores of young black thugs rests squarely on the heads of prime minister Malcolm Turnbull and Home Affairs minister Peter Dutton. Mind you, a scene where stodgy old Turnbull breaks down the door of a house in the middle of the night and terrorizes the occupants with a baseball bat might be just the ticket to give him a much needed boost in the polls. Perhaps this could be a new Liberal Party commercial:

The Sudanese guy in the attached meme who is doing his very best to look all angry at being forced to live in the hipster hellhole of inner city Melbourne, reckons that not only are these two politicians really the ones at fault, but they should also be deported into the bargain.

A major figure in Melbourne’s South Sudanese community promised political retribution yesterday against the Liberal Party for its handing of this summer’s African youth crime crisis.

Mr Deng told a crowd outside Victoria’s State Library yesterday he would mobilise against politicians he said were playing up the threat of youth crime, including Malcolm Turnbull and Home ­Affairs Minister Peter Dutton.

“Peter Dutton and Malcolm Turnbull, you need to be deported,” he said at the No Racism: Stop Criminalising Our African Communities rally.

“We are all Australians … if you do not stop what are you doing, we are going to send you back to where you come from.”

I have some English language advice for Mr Deng, (whose name suggests that the Chinese really are taking over Africa): the word that you’re looking for here is exile. If you forcibly remove someone from their native country then you are exiling them, not deporting them.

Notice that I did not say ‘country of birth’. I’m sure that many of the little bastards involved in the crime wave have been born in Australia, but it is not their native country despite everything that the purveyors of multicultural delights would have you believe. They can indeed be deported, and should be.

Deng’s claim that we are all Australians is true only if you also are able to believe in witchcraft and the tooth fairy. But his threat to “send us back where we come from” hides the only truth in an otherwise incoherent tirade. Our new Sudanese thugs would like very much indeed to send us all away somewhere. Australia is a land of milk and honey for them; too bad about all of these horrible white people that they’re forced to share the place with.

“They are playing political games and it is not right … we were not prepared for what they said over the summer,” he said.

“We have to defend ourselves.”

I’m sure that the victims of Sudanese crime would also like to defend themselves, but under Victorian law and with a police force infected with Marxist progressivism that sort of action would most likely see them being jailed instead of their aggressors. It seems that the Victorian police force don’t really like doing their job if it collides with their multicultural ideals and produces unworkable logical fallacies.

Victoria Police deputy commissioner Andrew Crisp, who said early last month there was not a gang problem, also spoke at the service and said police did not want to lock up young people.

“We don’t shy away from that commitment to investigating crime and arresting those responsible … but we want to work with churches … we don’t want to lock people up,” he said.

“We especially don’t want to lock young people up.”

What he really means is that they don’t want to lock young African people up. In the joyous paradise of a multicultural society, some skin colors are more acceptable than others. So here we have a self-appointed leader of the Sundanese community, sorry – “Sudanese-Australians”, telling all and sundry that the fault for crimes committed by young Sudanese lies with Australian politicians. And we also have the additional pleasure of a police force saying that they don’t really want to do their job of arresting people who break the law because then the poor cops might have to suffer the feel-bads.

Why, it almost feels like a carte blanche invitation for a certain segment of the population to go on a crime rampage. Oh wait; they already are.

But back to Mr Deng, the Sudanese immigrant who must be so upset that he’s not able to organise an ambush on a back road to assassinate his political opponents; at least, not yet anyway. In his words Deng has inadvertently revealed that the crime wave problem is not restricted to a bunch of wayward youths. The same ignorant arrogance and attitudes that cause those young men to rebel against the nation that foolishly gave them sanctuary are also present in their community leaders. The rot of ignorance and hate pervades all levels of the Sudanese community. Which leaves us with only one solution:

They have to go back.

Bachelor cooking – How to select cookbooks.

Good news for investors – the stock market has gone down.