Hey team USA, how's that diversity working out for you?

The USA took their most diverse team ever to this year’s winter Olympic games.

The U.S. Olympic Committee says it’s taking its most diverse team ever to a Winter Games, an impressive and deserved boast that requires a caveat of sorts.
Yes, USOC officials are pleased the team includes more African Americans and Asian Americans — and even the first two openly gay men — than recent winter squads. But they also realize this year’s U.S. Olympic team, not unlike those of most other nations gathering in PyeongChang this week, is still overwhelmingly white.

Selecting athletes based on their skin color or where they choose to stick their private parts sounds like a winner all round. Although by its own admission their team is still too white. How positively awful. Why, those whities will probably just blend in with the snow and be lost for ever.
So after the first week, how are things going for Team Diversity? 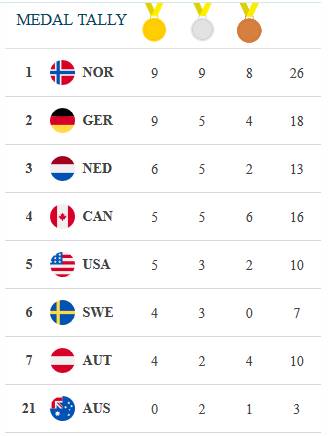 10 medals to Norway’s 26. So, pretty fucking shit then.
Diversity wins again. And by win I mean lose.

You know you're a beta when …

Pass me the white rose.