I’m on holiday for 2 weeks and off to Italy today for a few days to catch up with my old rafting buddies. Maybe even take a raft down the river, who knows? So there won’t be any posting until around Wednesday next week as I want to have a little and dare I say well deserved break from the internet as well. As such I will not be approving comments from new commenters until I get back as I won’t even be checking for them.

The podcast will return next week but I do want to give a shout-out from my listeners from last week’s episode who responded to my request to subscribe to the old blog so as to push me over the 300 followers mark. Thanks guys, you came through. It is the Spartan 300!

Fewer links than normal this week so to make up for it I have more than one photo of a hawt chick. Go on, take a look – you know you want to.

A feminist professor at California State University-Fresno recently published an article lamenting that federal programs to promote “responsible fatherhood” among vulnerable men in fact perpetuate “patriarchy,” “gender norms,” and “hegemonic masculinity.”
The article, “‘Manning Up’ to Be a Good Father: Hybrid Fatherhood, Masculinity, and U.S. Responsible Fatherhood Policy,” was published in the new issue of Gender and Society by Jennifer Randles, who teaches sociology classes at the California school.

Always when discovering a screed such as this I find it useful to turn to the wonders of pictures. Let’s check out the good prof, shall we?

Note the man-jaw, a prime indicator of ferocious spud-male feminist toxicity. This female man-jaw is particularly acute as she appears to have the beginnings of a John Travolta-style chin, although she may to need to get one of her bull-dyke mates to properly finish it off with a hammer and chisel.

Also notice how it appears that the effort involved in smiling for the camera is actually hurting her face. She’s doing her very best but this must have caused her to have anxiety attacks for weeks. I wonder what sort of work experience this woman has?

Linkedin is your friend.

It’s not very impressive, is it.

Her Twitter feed is pretty boring but there was this photo taken at some march against Trump I assume: 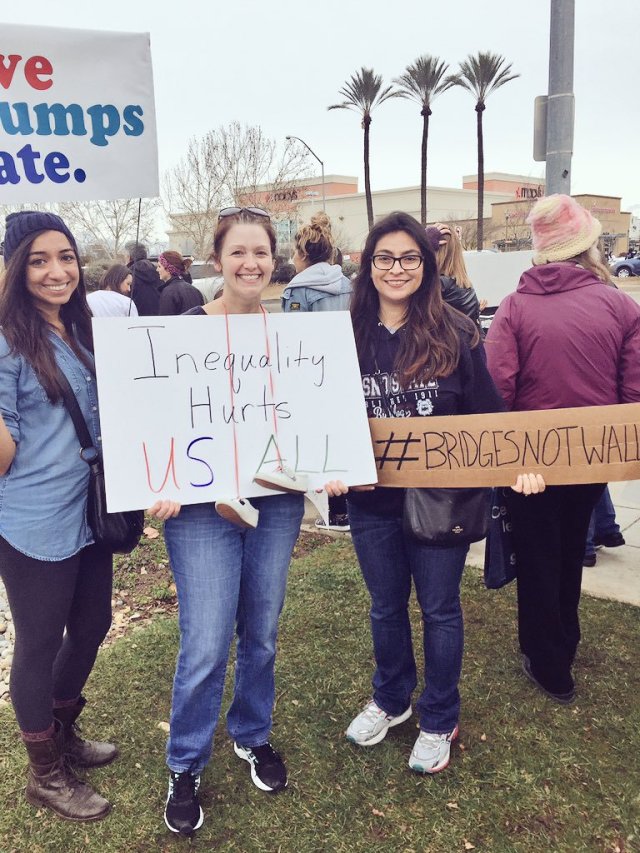 Look, she has her brown and Asian friends. She’s so diverse! And she just wants to give away her white country to all those dusky foreigners that want to come in and share in our bounty and good fortune because we are horrible for being white.

This is the result of giving mediocre and idiotic women of average looks and intelligence access to so-called higher education.

The existence of The Wall and men aging like wine, women like milk, vindicated by SCIENCE. Check.

For women, this pattern holds over the full range of ages on the site: The average woman’s desirability drops from the time she is 18 until she is 60. For men, desirability peaks around 50 and then declines.

It’s my birthday next week. 47. Yeah, baby. Happy birthday to me.

Chelsea Clinton: Legalized Abortion Has Added Three and a Half Trillion Dollars to the Economy.

Abortion has been an important economic stimulus ever since it was legalized by the 1973 Roe v. Wade Supreme Court decision, Chelsea Clinton claimed at a “Rise Up for Roe” event on Saturday.

My victim-blaming standards are consistent. If a sorority girl doesn’t want to get gang-raped by frat boys, she shouldn’t get passed-out drunk at the frat party. If a gay student doesn’t want to be groped by elderly lesbian professors, he should stay away from New York University.

Maybe the safest thing is just never go to college. Everybody on campus nowadays claims to be a victim of something. It’s not safe.

The first WordPress blog goes down, taken out by leftists.

First they demonetized people on YouTube.
Then they erased Alex Jones.
Today, it’s totally erasing the occasional-stop blog at  Fellowship of the Minds.

It’s been completely taken out by WordPress, as of today.
I know this because I was there yesterday or Monday, and his last post was about 6PM PST yesterday, regarding the travails of girlfriend-beating Muslim Rep. Keith Ellison.

Regular readers should note, this blog’s days, and everyone like it that you visit, are clearly numbered. Because FOTM was mild, and relatively unoffensive compared to what we post here regularly.
So clearly, TPTB want it all, just as we told you Sunday.

Because that’s how the Left rolls.

I have begun steps to host my own website. I am not a big fish by any standards, but I am a fish and I know that I will be eventually caught.

A final solution to the problem of mosquitoes in the bedroom.

Of course the earth is flat.