Boomers flooding gyms in all out effort to avoid old age.

Wisdom in life is about accepting the stage of life in which you reside; childhood, youth, adult, middle age, old age. In the past when we had fully functioning family units this progression was natural as every age group had their role to play. When you’re 65 and you have 7 grand kids then by definition you’re a grandmother. You do grandmother type things. This means spending time with your grandchildren and even showing an interest in them like you actually mean it.

But if your entire existence has been about you, about finding yourself, about finding your passion, about discovering who you are, about getting in touch with yourself, about acknowledging your true inner self, about making constant critical breakthroughs that are all designed to further who you are as an individual to the exclusion of all others around you, well, you’re going to keep exhibiting this embarrassing behavior well into the final stage of life.

Today’s 60-somethings know that age is no deterrent to even the most challenging athletic goals. A new tribe of hard-bodied sexagenarians is emerging.

Superfit 60-plus members put in longer hours at their gyms than any other age group, averaging eight visits a month, according to the British healthcare charity Nuffield Health. More than one in 10 members of David Lloyd gyms are 60-plus. And it’s not the more gentle classes on the timetable that are drawing them in but high-intensity workouts and tough training regimens.

Sport England says the biggest rise in sports participation in recent years has been among older age groups, with running and cycling experiencing massive growth.

There’s a photo too … are you ready for it? 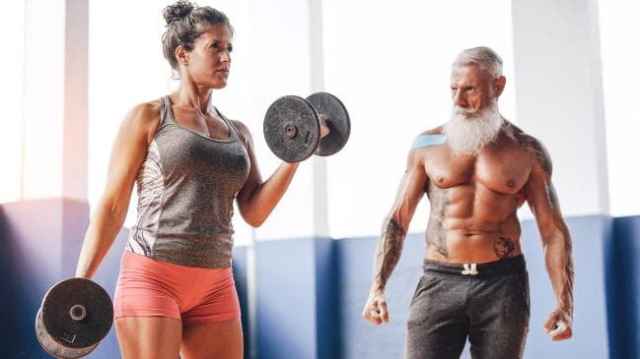 England Athletics has recorded a 12 per cent increase in those aged 60-plus joining running clubs over the past 12 months, while British Cycling says 74 per cent of those over 60 say they cycle not just to enjoy the scenery but to seriously improve their fitness.

As a former cyclist in my teens let me just say that boomers have absolutely destroyed the sport of cycling.

Now don’t get me wrong; as a dedicated weightlifter I consider it to be immensely important to continue to be strong as you age. Strength is the difference between a healthy and enjoyable final stage in life and one where you drool into your cereal from your wheelchair in an old age home.

But it is the sheer lack of dignity and “look at me we will never die” attitudes of the Boomers that is so annoying. But above all else it is the continued self-absorption to the exclusion of all others that grates the most.

Fashion fitness brands are signing up the superfit 60s as ambassadors. Yazemeenah Rossi is a 63-year-old grandmother with 218,000 Instagram followers who fronts a campaign for the fitness brand Sweaty Betty. Rossi credits her commitment to exercise for giving her the body of someone a third her age. “I’ve practised yoga for more than 30 years,” Rossi says. “And I’ll spend between 30 minutes and an hour doing it each day.”

Time for her grandchildren amongst all of this? Oh sure, she’ll pop in to see them now and again, although she would never have the little bastards dropped off at her house where she’d be trapped with them. That would never do.

I’m just waiting for them to announce that 70 is the new 30. It’s coming very soon. I’d put money on it.

They were the most worthless of times.

Be the best feminist male ally that you can be.