We all witnessed the impotent rage of journalists when confronted with their own draconian advice of learn to code after they discovered that their jobs are becoming the equivalent of a horse poo cleaner during the invention of the motor car. It sure wasn’t pretty and they also revealed just how thin their collective skins are.

Apparently it was unacceptable behavior to taunt journalists in this manner. Funny that, as I don’t see any journalists going in to bat for Australian coal miners who have been unilaterally told by an Australian political leader to learn to code. And this is a state which has rather a lot of coal still underground. Let’s hear from Queensland deputy premier Jackie Trad.

What we need to do as a coal exporter is understand that, and equip our communities with the best possible chance of re-skilling, and that’s why we’re focused on other materials. 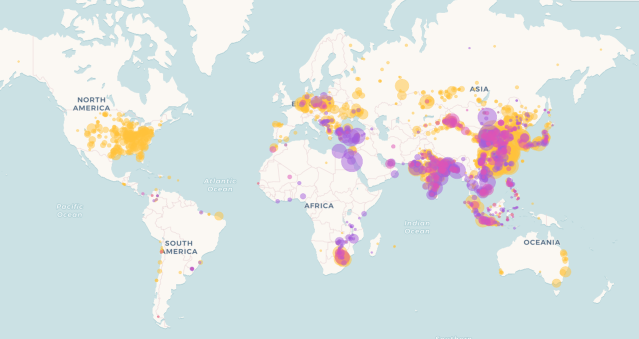 Coal plants around the world. The pink ones are under construction and the purple ones are planned.

The politician who uttered the above inanity has never worked a day in her life. Her CV reads along the lines of; arts degree, Master of public policy, politics, and along the way she dipped her toe into the grimy waters of “community activity” and “industrial organising” which translate respectively to troublemaker and crook. I assume the woman is one of those worthy recipients of the Labor party quota system which gives certain lucky people preselection in plum seats if they have two breasts to rub together.

Coal is Australia’s primary export. It basically is keeping our moribund economy afloat, but Labor wants to scuttle it because of socialist climate change pie in the sky global virtue signaling. Climate change believers; the only people in the history of the planet who complain about nice weather.

Will dear old Jackie Trad be censored by our social media betters for daring to command workers of a viable, productive, and important industry to go and learn to code? Somehow I doubt it. In the socialist workers paradise of Australia, some workers are more equal than others. And the seemingly helpful advice of learn to code is actually a code in of itself; its real meaning is something along the lines of, please slink away and die out quietly.

Which is why journalists got so upset when we used it against them.

George Pell and the Australian assault on Christianity.

There is no such thing as a hate crime.