A real mother on Mother's Day.

If you want to make prog tard liberal lefties sperg out because that’s how you get your kicks, just show them the following photo. 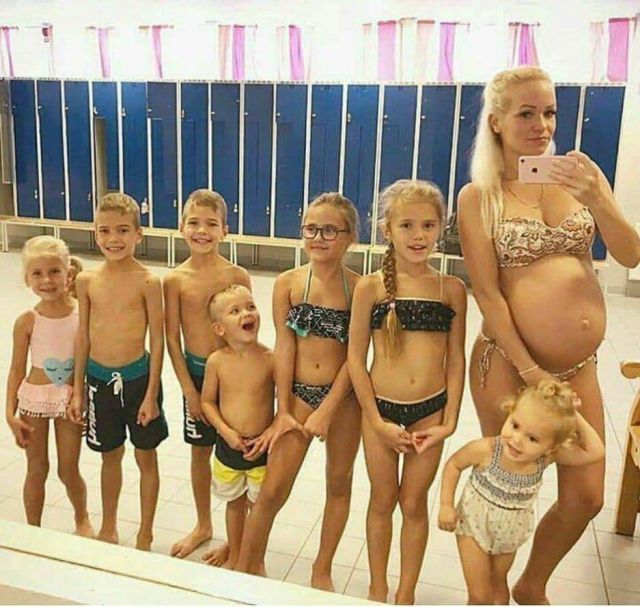 For the left this sort of picture is a horrible and terrible thing on many different levels. Their usual first attack route will be to scream that the world is overpopulated and such a woman is horribly irresponsible. The deception of this argument however, is instantly revealed when you change the skin color of the family to anything other than white. Libtards will then gush forth with exclamations of what a beautiful family it is and how proud the mother must be.
This is because demographics is destiny and the left are completely invested in the destruction of their own race and culture. In other words, the left is a suicide cult on a scale never before seen in human history. This is why the following animation makes them happy:

An animation showing infant mortality in Africa since 1950 pic.twitter.com/aOraWvP29U

Bleeding heart liberals think this animation is the best thing ever because they live in the hope that all of those African kids will grow up and cross the oceans to replace us. Which they will do on our current trajectory.
But back to our friendly family photo. The other reason that this sort of image infuriates the left is because women nowadays are supposed to have careers, not families. This attitude ties in with the demographic replacement argument because it greatly helps to speed up the replacement process if the native population are too busy slaving for the man rather than having lots of lovely children.
But I am not writing this article for those on the two extreme sides of the debate. The audience for this piece are women in the middle; women who genuinely believe that they can have it all, a career and some passing resemblance for a family. 80 years ago this photo would have been celebrated while the idea that women should have careers would have been attacked. Today the opposite is the case; this photo is attacked while women pursuing careers are celebrated.
This is because there does not exist anywhere in nature what is called a happy medium. You cannot simultaneously believe that the sky is blue and green; it is one or the other. Likewise with the earth is round or flat, and so on. If we celebrate women having careers then by definition we must attack women who focus on having large families because you cannot have both and thus you cannot celebrate both. Ironically this women does have a career, the career of genuine motherhood, but that is not what is meant by career these days.
This woman’s life is rich and meaningful in ways that all the high powered career girls can never have. She is also undoubtedly courageous to take such a path in today’s twisted society. She is in fact a real rebel, a woman who does think for herself, and her husband is undoubtedly a most fortunate man. Women who dye their hair blue, pierce their nose, get tattoos, and commute to work in a meaningless cubicle job are the mainstream zombies of the modern world. And they hate this type of woman with every fiber of their being. They hate her because she didn’t fall for the lies that they so stupidly believed.
For those women who still have the time to step back from the precipice of a middle age with cats, do away with the falsity of your crappy jobs, find a good strong man and commit yourself to him. And then under his strength and guidance do what this fine woman has done and create a real life with meaning for yourself. And in a few years you too will have a Mother’s Day worthy of the name.

The sheer awfulness of Game of Thrones.