Climate change has been so damaging to the world not just due to the fraudulent financial cost but because of the associated damage to the scientific method. Or perhaps the scientific method was always suspect and the climate scam has simply revealed the problem. The issue is how results are obtained. True science involves the scientist formulating a hypothesis and then repeatedly testing the hypothesis in order to disprove it. It matters not how many supporting tests you come up with, if it is disproved once then it has been proven to be false.

Fake science works in a couple of ways. A common scam is to reverse the method by finding a lot of evidence and then constructing a hypothesis around this. Another way is by cherry picking collaborative evidence. Taken further and we have falsification of evidence, not to mention the highly suspect routine of substantiating science by what is known as peer review, or in other words, science by popularity.

Science in the past was more robust simply because the system itself was geared towards practicable results, but when science made the leap from a search for knowledge to merely a means to propagate a career then it became inevitably tainted. That science has any remaining credibility is due to its past record, not its present form. What has happened to science is simply a degeneration to the mean as most other fields are in thrall to the same weaknesses with the glaring exception of engineering.

Naomi Wolf is an excellent example of a writer who is more than prone to constructing evidence to fit her narrative. Wolf has a singular talent for writing books that tap into the prevailing SJW zeitgeist. She also has a tendency to simply make stuff up. Take the following stats related to her bestselling book, The Beauty Myth. 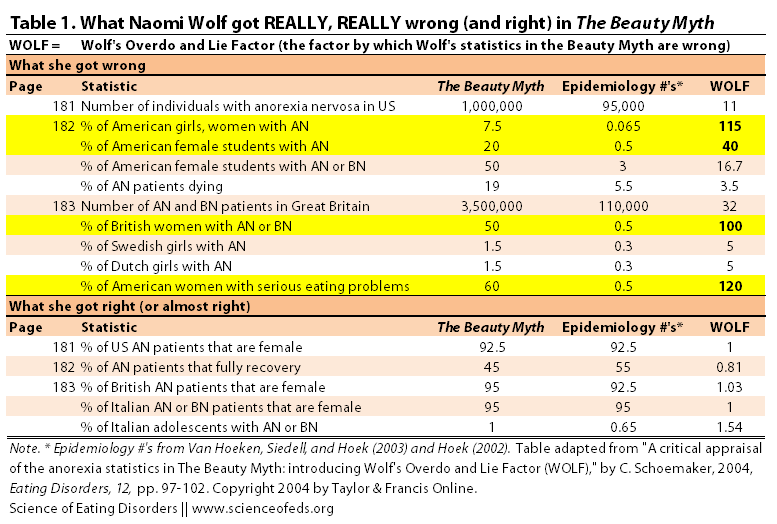 The actual percentage of British women with some form of eating disorder is in the realm of 0.5%, hardly the sort of figure to inspire sweeping terror in mothers of teenage girls. and most unlikely to get a mainstream publisher interested in the book. So Wolf bumped the number up to a total of 50%, an increase by a factor of 100, and with that she had a bestseller.

But worst of all we were lumbered with a false narrative that governments used to further sociological changes. After all, Wolf is one of these people that are known as ‘experts’.

Last year Wolf decided to get on the homo bandwagon and she set out to write a book that simultaneously attempts to claim that homosexuals were horribly persecuted in the past but that homosexuality was also seen as something normal and natural. This schizophrenic approach is probably due to Wolf wanting to cover all possible bases; when you’re after a bestseller you need to make your sweep as broad as possible. For instance, part of the blurb for the book which is titled, Outrages; sex, censorship, and the criminalization of love.

The best-selling author of Vagina, Give Me Liberty, and The End of America illuminates a dramatic buried story of gay history—how a single English law in 1857 led to a maelstrom, with reverberations lasting down to our day

Until 1857, the State did not link the idea of “homosexuality” to deviancy. In the same year, the concept of the “obscene” was coined. New York Times best-selling author Naomi Wolf’s Outrages is the story, brilliantly told, of why this two-pronged State repression took hold—first in England and spreading quickly to America—and why it was attached so dramatically, for the first time, to homosexual men.

Before 1857 it wasn’t “homosexuality” that was a crime, but simply the act of sodomy.

How Wolf can attempt to separate sodomy from homosexuality and still keep a straight face underlines the deceit that propels these people. No lie is too big, no statistic too small.

So Wolf had her book, she just needed to write it and come up with some evidence along the way to support her claims. And so the cherry picking of data began. The thing to understand is, when you’re involved in such an undertaking that in your heart you know is bullshit, when you by chance stumble on some actual evidence that might support your bullshit theory, the corresponding dopamine hit is so big that in the rush to follow the new path, all sorts of basic investigation simply go out the window.

Which led Wolf to make an error that didn’t bare much scrutiny.

In the pantheon of nightmares, somewhere between “falling into an endless pit” and “back at high school but naked” is “going on national radio and learning, on-air, that the book you wrote and is to be published in two weeks is premised on a misunderstanding.” Naomi Wolf, unfortunately, is living that nightmare.

When she went on BBC radio on Thursday, Wolf, the author of Vagina and the forthcoming Outrages: Sex, Censorship, and the Criminalization of Love, probably expected to discuss the historical revelations she’d uncovered her book. But during the interview, broadcaster Matthew Sweet read to Wolf the definition of “death recorded,” a 19th-century English legal term. “Death recorded” means that a convict was pardoned for his crimes rather than given the death sentence.

Wolf wanted the term to mean execution because it was the prize among all prizes to support her entire theory. Without this she didn’t really have a book, which is supposedly why her publisher didn’t take a closer look at it either.

Listen to the on-air interview where Wolf is publicly confronted with her lies.

Everyone listen to Naomi Wolf realize on live radio that the historical thesis of the book she's there to promote is based on her misunderstanding a legal term pic.twitter.com/a3tB77g3c1

There are two takeaways from this debacle, none of which make Wolf look any good. Either she is hopelessly incompetent as a writer and researcher, or she is a fraud. Take your pick, it’s one or the other. Or perhaps if you really want to be generous you could level both of the charges against her.

The book is to be published in two weeks which means that it has been printed. Wolf and her publisher have stated that they are going to have a look at it. Bullshit. This inaccuracy will stand, her book will be purchased and read, and people who want to believe it will believe it because it furthers a certain popular agenda.

Of course, Wolf is a prog-leftie superstar so everyone still has to be nice to her and give her the benefit of the doubt, even the man who revealed her inherent hopelessness.

What I thought I would do is pick a short passage from the book (pp. 71-2) and go through it in detail. @naomirwolf is taking a second look at her work, and, I think, with great generosity, has offered to share her findings as she goes. This is pretty decent of her, I think.

The lies of The Beauty Myth still reside on bookstore shelves and dark Amazon corridors, so decent is not a superlative that I would associate with Wolf.