Dalrock draws attention to an interview with some old bat called Wendy Griffith who is famous for making a career out of never getting married but who has now gotten married. I fully expect her next book to be about divorce; I mean, where else does she have to go?

Anyway, here is a quote from Griffith that Dalrock used and which I want to examine a little bit closer.

Griffith:  If we don’t know that, again we’ll settle for much less. You know it breaks God’s heart when we settle. And that’s the other thing that the Lord taught me through the heartbreak was God hates compromise! He hates it when we settle, because He’s a good daddy, he wants to give his daughters – and his sons – His very best. And He’ll let us settle if we ignore all the red flags and if we keep going He’ll say ok but He desperately doesn’t want us to settle. He want’s us to hold out for His best.

The level of cognitive dissonance on display here is breathtaking. I knew that these women were out where the trains don’t run, but I never really imagined that they were this crazy. This quote is from someone with a pathological level of self-obsession. Which would be one thing if she was by herself locked up in a home, but the woman is out there influencing millions of similarly delusional women who hang on her every pronouncement as if she were a conduit with God.

How curious that the left is all about equality, and yet when it comes to selecting their future spouse apparently God purposely made a great number indeed of very average men who are entirely beneath consideration just so that women like Wendy could test their faith by rejecting them. How is it even remotely statistically possible for God to supposedly want all of us to wait for His very best?

Implicit in this delusion is that Griffiths herself is one of these very best from God. Why else would she be holding out for the very best if she were not also one of the highly anointed? It’s a club, you see, and one with a most definite hierarchy. At the top are the people that God values the most, and to break into that special club you have to love and value yourself above all others. Apparently all that stuff in the bible about selflessness was a lot of guff. All those saints who abandoned their worldly possessions and went out to spread the word of God were just a bunch of losers who couldn’t attract the best of the best of the best like Wendy Griffith.

Of course the reality is that women like Griffith have wasted their lives and thrown away their ovaries, and the only thing that will make the pain of this reality bearable is if younger women make the same mistake. What she really means when she’s saying that God wants women to wait is that God wants you all to share in each others’ self-induced misery. Women who have made or are firmly on the road to making bad choices react with furious indignation when confronted with any reality that conflicts with their fantasy world in which they are invested.

Not joking. Deadly serious. At the airport.
Just saw an Amish girl and was like "dang, she's hot."
Then I realized, she's not really that hot. She's just in a dress, has no tattoos, is simply kept and that American women are so ugly I'M STARTING TO THINK AMISH IS HOT!!! #fuck

Aaron observed a feminine woman and contrasted her with what is paraded on view and found that women in general are seriously coming up short in comparison. Implicit in Aaron’s Tweet is the fact that the woman that he observed is young. He is not going to be saying this about a has-been like Griffith, no matter how well she is dressed.

To say the reaction to this innocuous Tweet was a little over the top is somewhat of an under exaggeration. Women are furious with him, not to mention the parade of white knights riding to the rescue of the good name of women everywhere. A great number of the angry replies to Clarey are composed of put-downs of his physical appearance which are all attempts to disqualify him from the club of special people. While I am not saying that these women are religious, the philosophy is the same as that used by women like Griffith. Reality is a bitch and women have never been that good at accepting reality even at the best of times.

Griffith’s message is also for men. It is important for men not to go after any young women who have made themselves available as they should be patiently holding out for those older women who have finished with their party years and who are now looking for that special man that God Himself wants for them. 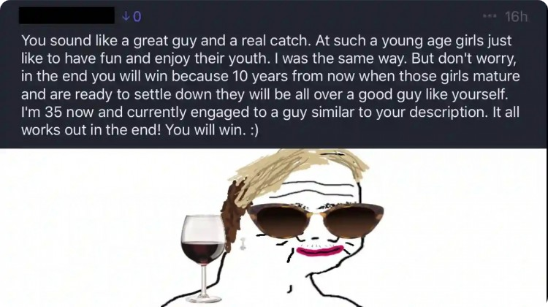