Won’t anyone think of the leftists?

A woman in the UK who screamed Nazi at a Trump supporter has been hounded out of her job.

One woman with a blonde bob can be seen in the video screaming hysterically in his face. She quickly became a symbol of the British bourgeoisie’s particularly nasty case of Trump Derangement Syndrome, which spilled out on to London’s streets during his state visit this week.

Now, she’s been forced to leave a job.

Out of control leftists are beginning to discover that their actions are now having consequences. Even more horrifying they are now being held to the same unfair and devious tactics that they have enthusiastically used against their ideological enemies. Sounds pretty good, right? Perhaps they will begin to see the error of their ways and rethink the whole ideological class war rhetoric thing. I know, I know; fat chance of that happening. They all want a nice civil war where all of us bad guys are taken out and then they all live happily ever after in a socialist utopian dream.

But at least our side must be happy with this new turn of events, right? Right?

What Prigent participated in was out of order and thorougly dumb, even if she didn’t see it that way. She tweeted an apology soon after the incident, but only after she had been thrust into the spotlight, signing off with ‘Please leave my family and friends out of it’. The petitioners say it clearly wasn’t genuine.

But who cares? Why do we even know this woman’s name? Why does it matter if she went home feeling like an idiot or went home convinced she just refought the Battle of Cable Street? The total lack of proportion in these online witch-hunts is one of the most bizarre things about them.

We have been under serious social assault from prog leftists for years, but after Trump’s win and Brexit the left collectively decided on a doubling down not seen since some French queen told the huddled masses to go and eat some flour based products. The left forced their own hand and have dedicated all their efforts to terrorizing ordinary citizens into remaining cowed and silent. That is what this particular woman was involved in; she was front and center in a determined and public attack on her ideological opponent under the assumption that she was safe from all reprisals and consequences due to her being on the right side of history. 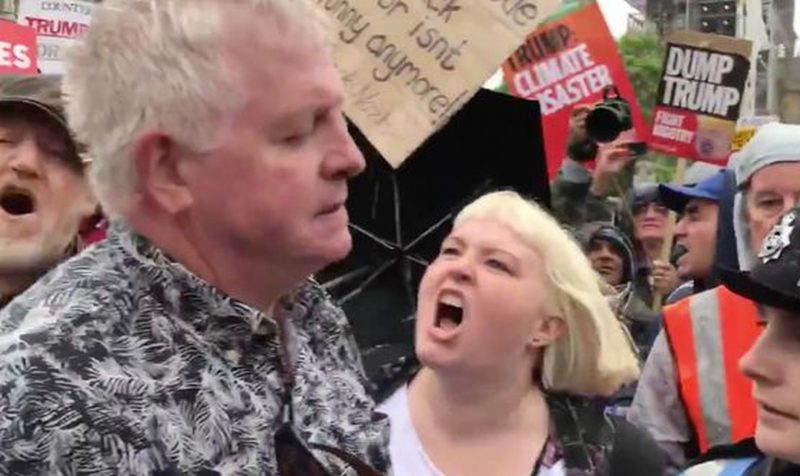 Who cares about this behavior? We care, that’s who. We don’t want this level of ideological ugliness on our streets. If this were to be left unchecked then the next step will be the disappearings in the middle of the night. Do not forget that the British population has been most effectively disarmed. This woman is dangerous, the ideology that she represents is dangerous, and they have all lost their humanity for their fellow man. 20th century history is littered with examples of what happens next, from 1936 Spain, to Germany, to Russia, to China, to Cambodia, the list is brutal in its length and depth of persecution and suffering.

Going by their fulminations on Twitter, it seems some right-wingers think this is about playing the left at its own game, as right-wingers have been the targets for myriad twitch-hunts in the past. But these people are just dressing up their own lack of principle and shrill, pearl-clutching authoritarianism as tactical nous.

Muh principles! These idiots are the agnostics of the political world, not a foot in either camp but rather some idealistic position in the middle where they are above any type of determined involvement. They are akin to a politician waving a piece of paper declaring peace in our time while the tanks are revving their engines and the bombers are being loaded. Their continued inaction due to their believing in libertarian fairy tales has been going on for decades, but now that the consequences of their own inaction are becoming very real and very ugly they are still unable to deal with the reality that is staring them in their disbelieving faces.

Indeed, one of the worst things about this case is that Prigent is a private citizen. Yes, she was on a protest, shouting mad things in public. But if every time we get a bit carried away on a demonstration we risk being filmed, identified and condemned by the social-media mob, everyone will suffer.

This is crowdsourced authoritarianism, and it has got to stop.

Tom Slater must live in constant fear of being unfairly labeled a Fascist or a racist. Please continue to give away everything that white people built, also known as Western Civilization, just so long as nobody on the prog left can characterize you as a nasty horrible racist. Our morally superior fence sitters just want to be able to live comfortably in some alternate universe where the left are not assaulting people in the streets for their beliefs, or celebrating an entire month dedicated to sodomy, or pressurizing businesses into banning right wingers, or tirelessly working to rewrite our history by changing our national anthems, and our flags, and pulling down our statues, and banning books, and subverting and destroying our institutions and universities, as well as openly agitating for open season on right wingers while they flood our nations with illegal immigrants and jail those of us who have the bad taste to notice what they’re doing.

Just go and get fucked, Tom. The left will line you up and shoot you once they’ve finished with those of us who stood up for what we believed in. Your fence sitting will not save your cowardly butt from what is coming. And we don’t want you either when the crap goes down because you’re the sort of backseat driver who shits his pants whenever he’s called upon to make an actual decision that he’ll be held to or called upon to stand up to his enemies.