It's pride month, so enjoy your time in the sun.

I’m all out of virtues. Plain tuckered out. Got no more shits to give, no more fucks to take. It’s gay pride month. Month. Not a day, not an hour, not even a week. A whole entire month dedicated to people celebrating where they choose to stick their private parts. Years ago, yeeeeaaaaaaaaaars ago, when the gays wanted the equalities, it was all about them being left alone to do what they wanted in the privacy of their own homes. Now we have an entire month of public sodomy celebration. Everyone has to get on board. If you don’t get on board, enthusiastically mind you, then you’re unacceptable. You’re a hater. You’re an un-person who is undeserving of being treated with the normal niceties of a civilized society.
In my book, a civilized society doesn’t publicly dedicate an entire month to sodomy. Just sayin’.

You can’t just celebrate being a fag. oh no, no, no, no, no. You have to have pride, baby, priiiiiiiiiiiiiiiiiiiiide. You’re so proud of your high STD rates, your high AIDs rates, your high suicide rates, and your abominable medical issues after years of putting things into places where things are not designed to be put. You’re proud of your helpless and slavish devotion to staying young forever. The homosexual community is a community dedicated to youth worship, which is why they have a hard time keeping their hands off the younger members of their tribe.
There’s nothing, and I mean absolutely nothing sadder than an old fag.
Heterosexuals don’t need a single day of the century to celebrate whom we choose to sleep with for the simple reason that we don’t base our entire existence around it. Who gays sleep with is all that they’ve got. But because homosexual men are true feminized men then they have a tendency to get hysterical, as women are wont to do. Right now they need a month to celebrate. Soon it will be a season. They’ll probably go with summer because they want to be able to publicly wear as little as possible without breaking any decency laws, (homosexuals and decency – ha!)
After a season it will be a year. Then a decade, then a century, and of course we will get to the point where it’s all gay all of the time. There is no homo endgame because this is all that they’ve got and the only way they can feel better about their miserable lives is to get more, more, more!
Aaron Clarey reckons that he is pro-gay, that he is on their side. But he committed the cardinal sin of noticing something, and we can’t have that. As soon as you notice something then you are by default a heretic. Take a look at the number of comments and retweets on this:

Who are the sorts of people that shop at Target, (Aaron Clarey, obviously.) Do fags shop at Target? I don’t think a fag would be seen dead in a Target store. Fags like to spend lots of money on ridiculous clothing like this. 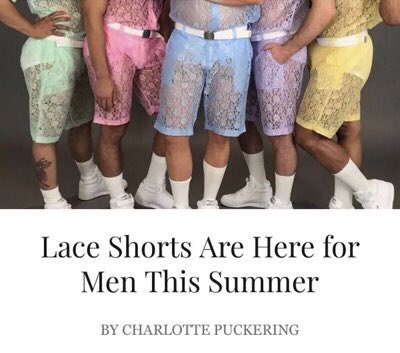 So why is Target going all-in on the whole homo thing? Do regular customers of Target really appreciate this sort of thing? Is Target stocking lace shorts for men for this summer? Somehow I don’t think so. This is about Target signaling their perceived and self-anointed virtue to their own clientele. Target is gaily waving its hands in the air and squealing wheeeeeeeeeeeee!! as it dances around the soon to be foreclosed shopping mall while its customers stare in open mouthed confusion and disbelief. I mean, can’t we buy stuff online now? Why even set foot in a Target store at all? Maybe they’re thinking that this will get everyone back in the door. This was their big idea to falling sales. Some mincing poof in the marketing department tossed this one out on the side as a half joke and management bought it and ran with it hard. Maybe they thought that they would immediately be accused of latent internal homophobia by the gay employee if they didn’t immediately jump to implement his stupid idea, (and maybe they’d be right because we’re living in a gay old world now, me hearties, it’s golden gay time all of the time!)
Don’t believe me that gay is the new way to win friends and influence people? Why, even presidential candidates reckon that too much gay is simply not enough.

That’s a force 10 on the gay-o-richter scale.
So gays get to be full of pride about sodomy and all of the rest of it but if we mention that we might just be a little bit proud about being descended from the people who built Western civilization then we are horrible racist deplorables. Got it.
Like I said, I’m all out of fucks to give. They’ve got their month and they’re running with it hard. So run with it hard, run with it long, because the blow-back is coming, and when it arrives, oh boy, I predict that it will be brutal. You didn’t think that we’d let you get away with attempting to indoctrinate our children into your perverted mental diseases did you? 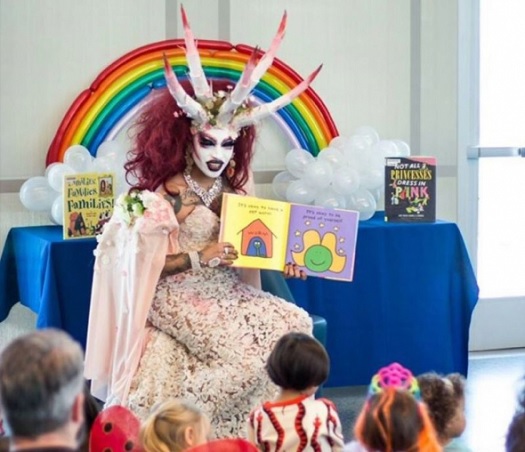 Example number one million of why women should not have the vote.