Oh my goodness, you ain’t gonna believe this, but apparently Trump raped this chick in a department store back in 1995. She’s waited a while to come forward, like right at the moment when she’s promoting her new book which needed a bit of controversy to get it going methinks. But hang on a minute, I hear you saying. Maybe she’s telling the truth; maybe Trump did have a shot at the title in the Bergdorf Goodman department store in 1995. That’s a while ago though, 25 years to be exact.

Carroll is now 75, is an advice columnist for Elle, and wrote magazine features for Playboy and Esquire.

Does anyone here seriously believe that Donald Trump in the prime of his life would have gone around raping 50 year old women in department stores?? 50 years old??? Ladies, please – the only way that you’re gonna get raped at that age is if you put yourself firmly in front of an invading Russian army, and even then the boys would probably need a whole lot of vodka and the NKVD ordering them into the breach, if you know what I mean and I think you do.

Let’s have a look at a contemporary photo of this bird and then lie back and try to imagine if you could summon the urge to, you know, do the Rapey McRapey thang. 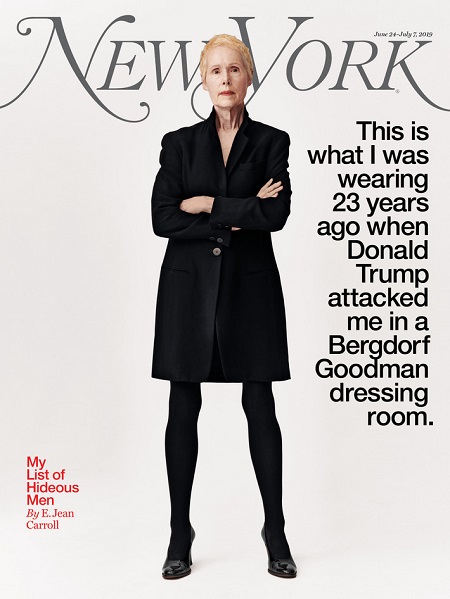 Look, ladies, we know that you’re all upset and everything about the wall that so unexpectedly but so devastatingly smacks you in your unbelieving faces, but no amount of fantasy make believe is going to get any of us to believe for even a moment that someone would want to rape you at 50 years old. You ladies could stride alone down a dark alley on New Year’s Eve in Cologne and you’d be safer than a soy boy at a screening of Revenge of the Nerds.

Ladies, you’re just not desirable. And that’s before you’ve even opened your mouths and seriously confirmed our first impressions. Apparently the #MeToo movement is now about equality – even the old, ugly, and inform can get raped too! This isn’t even scraping the bottom of the barrel; this is stripping the barrel into individual planks and examining the cracks for leftover sludge particles. Nobody will believe any of you ever again. You’ve jumped the shark, you’ve cried wolf too often, you’ve rung the warning bell so many times that all you’re gonna get from us is a bemused grunt as we turn over and pull the covers up around our uncaring ears. Every time in the future that one of you cries Me Too! we’re all going to collapse into peals of laughter while we point to pictures of this skank has-been.

Surely we’re approaching the end times. It can’t be too far off now, right? Right??