It’s been a while since we’ve done a Sunday cooking thread, so let’s take a break from the madness of the world and have a look at one of my mainstays in my cooking arsenal. I recently wrote about how to dress salad onion using salt to ferment the onion before eating; in a way it’s cooking without heat. This softens and sweetens the onion making it not just palatable but delicious.

Let’s have a look at how we can use salt with another vegetable in this way.

On my recent trip to Italy I paid a visit to some good friends who spend each summer high up in the Alps in the Fiemme Valley in the Trentino region. It is spectacular alpine country. I love the Fiemme Valley because in a geographical sense it is very wide and open, as opposed to the steeper and narrower valleys in the area. This lets in a good amount of sunlight even in the long winter months.

Just above the little hamlet of Molina is the agritur Malga Arodolo. Malga means high stable in Italian and agritur is an inn that utilizes as much of the local produce as possible. Four of us walked up to the agritur which took us a little over an hour. It sits at an elevation of 1250 meters which is just over 4000 feet. It is a high alpine pasture location and they breed cows, chickens, sheep, and rabbits, as well as cultivating an extensive vegetable garden. 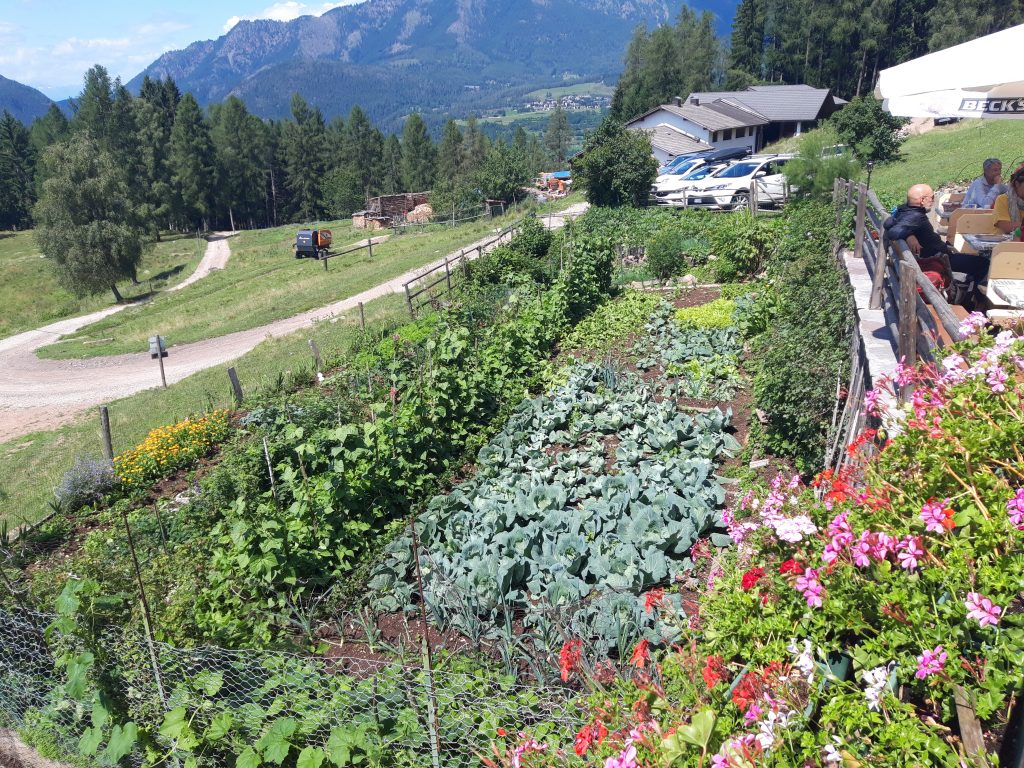 the road up to the malga with the vegetable garden in the foreground and the stable in the background.

While we had lunch from the vantage point where I took that photo, the garden was tended every now and then by a woman who must have been in her late 80s at best. We enjoyed one of the best lunches that I have ever had the privilege of eating, let alone the beautiful mountain setting in which we relaxed. The panna cotta was incredible, made from milk fresh and unpasteurized that came from their own cows. You can tell if a panna cotta is really good by giving the plate a little shake. If the desert wobbles like the firm breast of a young woman then all is good in the world. 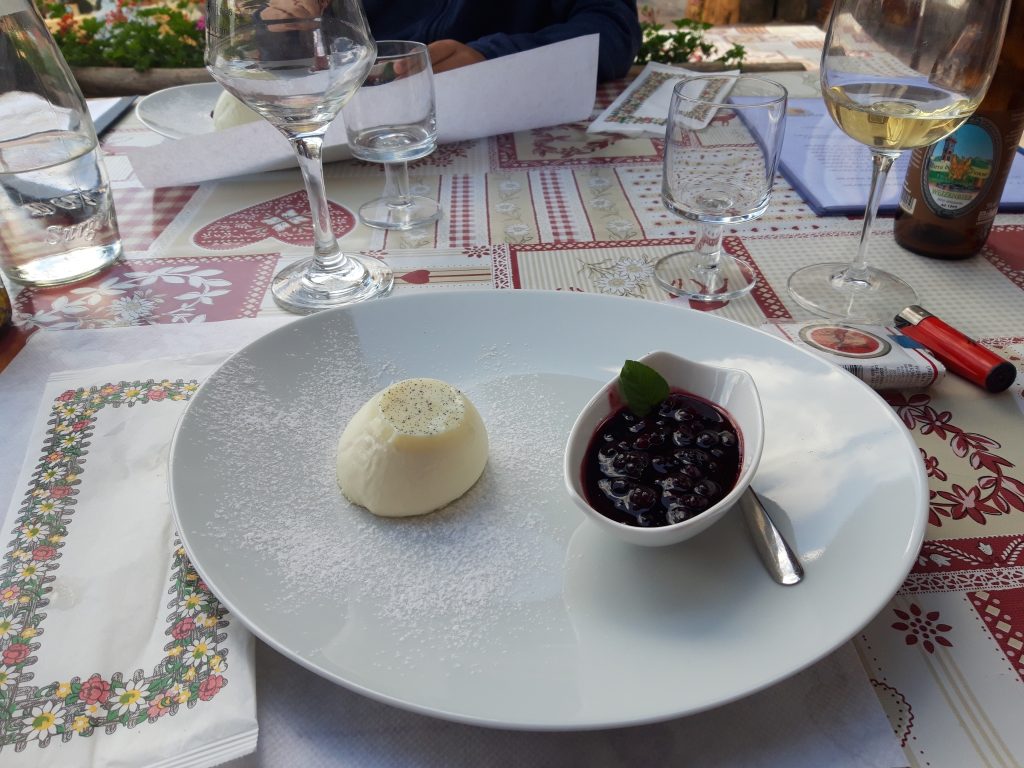 But this article is not about desert. It is about a contorno, which means side dish in Italian. Side dishes are important and they can make or break a meal. Anglo-Saxon countries tend to have a poor record on side dishes. Imagine you have grilled a wonderful steak on the BBQ. And your side dish? Some salad of limp lettuce leaves or perhaps a potato invention that nobody touches after the first polite mouthful. Sound familiar?

Italian side dishes can be so good that they are almost better than the main meal of which they are supposed to be the supporting act. Such was the case on this particular lunch. While we were walking up to the malga one of my companions announced that the insalata di cavolo cappuccio was the best in the region at this particular establishment. The rest of us murmured our appreciation at this information and as soon as we arrived I made a point of ordering some, just in case; the last thing that you would want would be to take your time only to be told the unwelcome news that they had run out.

I bet right now you’re feeling underwhelmed and that’s probably because Anglo-Saxon countries don’t do vegetables very well which is what you’re used to. We cook the hell out of them, usually by boiling them to death, leaving the unfortunate vegetables the weak and pale imitations of their former lives before they were butchered by ignorance.

It was simply outstanding green cabbage salad. So much so that we ordered another portion for the table. Oh yeah, we had some superb rabbit as well, but did I mention the cabbage salad?

Here’s how you make it.

Like all Italian cooking, because there are so few ingredients it all depends on the quality and freshness of what you are using. So get the best stuff possible. Your cabbage should be firm, compact and with a nice outside hood. If you can’t source apple vinegar then you can use white wine vinegar. And it goes without saying that the olive oil has to be the very best that you can get.

Remove the rough outside leaves of the cabbage and then cut it into quarters. Using a mandoline slicer or a grater, carefully shave the cabbage as thinly as possible. This is mine that I prepared for lunch today: 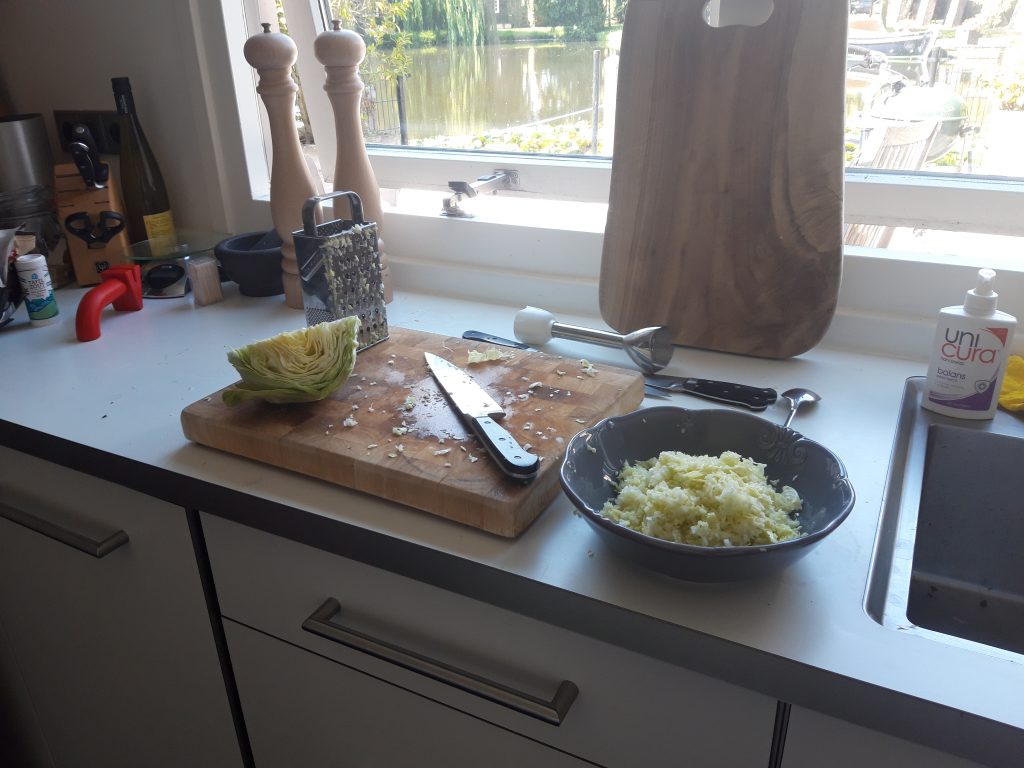 not a bad kitchen view that …

Now add the other ingredients in the order in which I listed them. Then mix well together and leave to sit for a few hours. Yes, a few hours and the longer the better. A minimum of one hour but if you can leave it all afternoon then you will thank me. This is why I was worried about them running out at the lunch. The cabbage will release some fluids over this time. Check for seasoning and olive oil before serving as you may have to add a little more.

One cabbage will feed 4 people as a side dish. Be prepared for there to be a small altercation over who gets the last remaining portion that was politely left in the serving bowel before everyone tasted it. And you can grill the very best steak possible, but they will be talking about the cabbage. Really.

The beginning of the great push back.

Test cricket is the greatest game in the world.